When I signed up for the A to Z challenge I knew exactly what I would write about for the letter Z. The rest I was clueless. Eventually now that I have made it through all other alphabets, It is only apt that the last post in this A to Z challenge should be  about a person whose Zest for life humbles me. 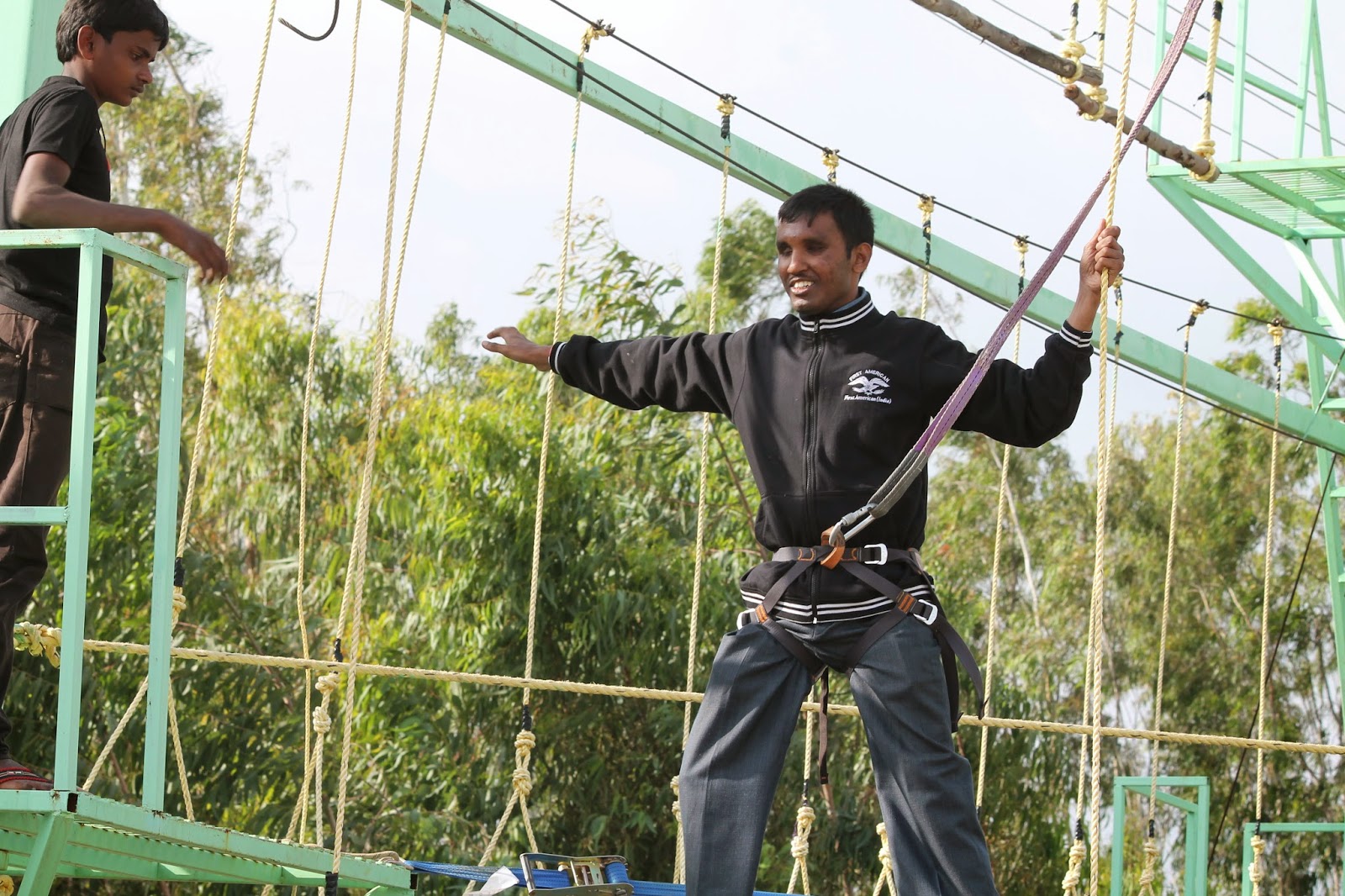 Waseem gets a little irritated when he is being put on a pedestal although I must say he handles it with amazing grace when people especially strangers do that ever so often with him.
Therefore, instead of writing in third person, I asked Waseem if he would be the guest blogger for this post. This post is an extract from his speech at our Toastmaster’s club . At the cost of sounding pompous, let me say this. I edited, tempered  and mentored him for this speech. Therefore a wee bit of the credit for this post is due to me as well . ( You see, Humility is not my forte )

I am the third in my family. My parents rejoiced when I was born because after my brother who was born blind, they had a son who was sighted. But their joy did not last  long. I was around four years of age, living with my aunt  when I started losing my eyesight gradually.  I did not tell my aunt about it. When my mother came visiting I insisted that I wanted to go back with her. It was then that I told her that I was not able to see properly. By the time I was seven I lost my eyesight completely.
My parents were determined to give us a good life.
My dad was an Auto Rickshaw driver and his Auto Rickshaw was his second home. He always said, my sons are my 2 eyes, so am I for them. They are  not blind.
My mother did not know kannada, she was not originally from Bangalore, yet she took me everywhere to make sure I get the best in life.
Many discouraged her idea of giving us  formal education saying, 'your blind children can’t study much' and anyway there are no schools for visually impaired. But she was very much firm on what she wanted to do. I was  educated at the Divine life society for the blind over here at Whitefield in the initial years. Later I moved to Ramana Maharishi school for the blind.

It was there that we were taught not just reading and writing. They were practical and so I learnt a bizarre set of activities that included milking the cows, washing the cows, gardening, we washed our own clothes,made cargo boxes and even learnt to insert a thread into the needle so that we could mend our own clothes.

That was where I was getting prepared to face the real world. Learning to play chess was perhaps symbolic of all that. It was a school plus vocational training centre. Besides that there were ample opportunities to learn classical music and even Bharathanatyam over there.
I have been learning to play the Veena for  14 years now and have given performance in Radio, TV and also once in the US. I am on youtube so check me out here.

I finished school and then went to college  for my PU ( pre university ) to the government’s boys PU college in Malleshvaram. Until the end of my PU, my reading and writing was all in Braille and at times volunteers gave me reading service to support my academics especially to write my exams. I graduated with a B.A degree from Surana college in Jayanagar specializing in Journalism and Political science.

I think every individual should vote and pay their taxes.

Here is why I tell you that.  Many think giving in charity is good.  But no … Tax is the best form of charity. It is because when we pay our taxes a lot of people who benefit from basic education, roads and some like me get free public transport.

I worked for an NGO for while, I travelled to various places with them including a trip to the US to assess the facilities that they have for the visually impaired.

After a while I knew I had to get a job. I wanted a real job.

When I came in for interview over here,  I was expecting it to be tough and I was nervous. But you know what they asked me ? They asked me to search in google for naukri.com and read a job description out loud.  They must be kidding, I thought. I have Jaws software installed on my laptop and I have been surfing the internet ever since I was in college.

Then they asked me to draft an email. I thought they were asking me silly questions.  But Jayanthi tells me it was tough interview and a hard decision and a biog leap of faith for her to make. Later she told me that despite all her doubts about hiring me I got the job because of the one question that I answered.  She asked me the standard question that all recruiters ask. She asked me  where do I see myself five years from now.

I said I want to be a tax payer.  I want to be a tax payer to let everyone know that disabled people not only take benefits from tax payers money, but also give back to the society by paying taxes.  Really, I did not think an answer as simple as that would be a clincher.
That is how,  I  joined on a contract basis for six months . That was almost three years ago. I am now a proud taxpayer.
I am a software recruiter by profession.  I source resumes, interview people put them up for interviews with their line managers and finally negotiate salaries and get them to work for us. Trust me, if you know this industry, my job you know is not very easy.
Anyway this was my first real job in the corporate world and for the first 3-4 months,  I was only sourcing. That meant I only called up candidates and scheduled interviews. Then I started sitting for interviews with my colleagues.  Since then I have recruited many ranging  from fresh graduates  to Senior managers  for various roles and skill sets.
I ask them really tough questions before I put them across for rounds with senior people, because I believe from my expereince that senior people ask very dumb questions …. < just kidding>.

When I email or speak to the candidates and schedule them for interviews, most candidates behave normally.  But when they come to office and meet me for the first time, I don’t know what happens to them.  Here is an example.
I was scheduling some candidates for a particular position and I had called this candidate for an interview. The candidate arrived on time, I met her at the reception, walked her to the interview cabin and I did my first round of interviews with her.  I thought she would make the cut for the second round and let her know that my colleagues would now come down to meet her.

She sounded a little nervous and uncomfortable, but I put it down to the stress due to the gruelling interview that I was subjecting her to. I called up my colleagues on my mobile phone and let them know that the candidate was ready and went off for a coffee break.  One of my colleagues  who was supposed to be interviewing her met me at the pantry and said that the candidate was not there in the cabin. Another one  went after five minutes and came back saying the candidate was not there.
I was very sure I had seated her in that room and such are our security arrangements that no one could walk out without an access card. So I went along with both of them, opened the door and introduced them  to the candidate. I said, Hi Rituparna and introduced my colleagues and she said Hi.
My colleagues laughed out loud and that is when I heard one of them switching on  the lights in that dark room .  I learned that day, where the switches were and why it was important to switch on the lights in the room to make a candidate, especially a female candidate comfortable during interviews.
<just kidding>

It takes time for many people to treat a blind person like any other. Yes… we need support initially to figure out where the table is, where the chairs are, ( although we do not necearily  need to know where the switches for the lights are) the layout of the room, of the roads and everything . But it is only a matter of getting used to.  I do not allow that support to become dependence. When people get overly helpful, I try to politely let them know.
I have always been using the pubic transport  and come to work everyday using the  bus.  I never had my college, my music class, even my office close to where I lived and that helped me know different localities in Bangalore city. In my case I can say, I know the city of Bangalore like to back of my hand.

Talking of buses, here is one more of my misadventures I should tell you before I close.
One day I boarded a crowded bus. I was standing and behind me was a man. Apparently a seat became vacant in front of us. He whispered to me over my shoulder that the seat ahead of me was vacant. I moved forward to take the seat.  I sat down, but by the time I sat down I realized the cushion was slightly different.  It did not take me time to realize that I was sitting on someone’s lap. I juggled around to confirm my hunch and then got up with a jolt. I was sweating and my heart started beating fast. I rushed out and got down at the next bustop to avoid any further embarassment.
I am not sure what that girl must have thought about me.  <wink wink>

When Waseem finished this tight rope walk set about 20 feet above the ground effortlessly is when the rest of us who were onlookers realised that     'What you do not see, you do not fear.'


Perhaps this is how it is for him to walk everywhere.
- April 30, 2014
Email ThisBlogThis!Share to TwitterShare to FacebookShare to Pinterest