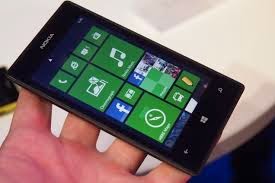 Nokia 520 is a very nice phone.
It is sturdy – fallen from my hands a 100 times but never really fell apart.
It is easy to use – I remember how much I struggled to get used to that Apple Iphone.  No such  problems with this one. I guess familiarity with windows 8 makes all the difference.
Moreover it is Value for money.

Of all the string of relationships I have had ever since mobile phones came in to being, my first serious one was my relationship with my Blackberry. Prior to that were a series of handsets that came and went out of my life, but in those days one never really went to bed and woke up with a handset. It was not a social stigma not to be seen in social occasions without one or a status symbol being seen with a flashy one.

The Blackberry in its heydays was trendy since Barack Obama used it. It was sturdy since there was nothing delicate about it. I thought I would have a life long commitment with it. I had fallen in love with it and truly believed it would last forever.  It perhaps had less to do with Blackberry and more to do with me coming on my own.   Talking of Blackberry as a brand, it is sad to see how it  is going down the dumps these days. Blackberry guys, please do something. Fight the market. Miss you blackberry. I am sorry I had to dump you.

Yes, me dumping  my Blackberry had to do with that seductive flashy thing called Apple iphone. Everyone sported one. It was the in thing and in my case it was some sympathy element for Steve jobs and his fight with cancer. May be that was a strategy by Apple to capitalize the market. Never mind ... to cut the long story short.  I was seduced by the Apple iphone. Apple i phone 4S to be precise.
Truth be told, that was a high maintenance relationship.

I once fleetingly lost my Apple Iphone (ok I got it back in a manner that could easily classify as a one night thriller … more about it on another blog post), The one thing that worried me the most was not the loss of my data, not the loss of connectivity, not the photos that I had clicked on them.

It was how much money had been spent on that phone. No, it was not just the cost of that damn Apple Iphone, but the iphone 4S charger, the spare set of  iphone 4S charger just in case the original was lost-misplaced-forgotten, the iphone 4S adapter, the spare set of adapter just in case the original was lost-misplaced-forgotten, the cover for iphone 4S and what not.
Nothing from the Apple suite comes cheap. If you try buying those duplicate Chinese ones as substitutes, they invariably give way just on the day the one month 'money back' guarantee period lapses.

That is how Nokia 520 came into  my life. It was recommended to me by my Technology Mentor ( more about him in yet another blog post) on the following conditions set forth by me.
1.
Only one phone satisfied all the above conditions. The horoscopes matched, and thus began my relationship with the Nokia 520.

I took to it like a fish takes to water. Never ever compared it to that overrated Apple iphone. That is how it should be with relationships. Let past be past.
My Nokia 520 and me... We warmed up to each other. My relationship with Nokia 520 is going great.  Well … atleast so far.

Only it takes horrible pictures.


The sunrise and sunset at Kanyakumari , are supposed to be breathtakingly beautiful. At the point where the Indian Ocean, Arabian Sea and Bay of Bengal meet, the morning Sun easily merges into its reflection of the ocean. There is only so much a Nokia 520 can do.

Apple Iphone :  For that alone I miss you a lot.

You cannot have it all ... I guess.
Pchh... life's like that.
- April 16, 2014
Email ThisBlogThis!Share to TwitterShare to FacebookShare to Pinterest