T - All the Tendulkar Fans

I just got my annual car insurance renewed online. So this derserves another post  dedicated to the Alphabet T- Tendulkar.
Read on to know more

All the Tendulkar Fans

I grew up becoming a Tendulkar fan. I am not a cricket buff, nor have I followed cricket or Tendulkar as fanatically as so many others of my generation  have. But if you live, work with and are surrounded by Tendulkar fanatics, no matter how disinterested you are, you tend to fall into the groove.

For the benefit of the uninitiated Sachin Tendulkar is an Indian Cricket player. More about him over here.

This blog post is about All the Tendulkar fans.

If there is one thing that is universally appealing about Sachin Tendulkar, it is his down to earth simplicity, his reverence for the game of cricket, the ease with which he carried off his records and the complete lack of flamboyance despite all the wealth that he amassed in his career and as an undisputed celebrity in not just   the world of cricket.

He steered clear of all the controversies that surrounds the game of cricket in India.
There was a point in time when many players  in the game of   cricket fell into the trap of bookies and the lure of quick money.  When the high profile list of players suspected of match fixing were tossed around, many said with conviction that Sachin could not be one of them. Such that I had someone coin the term Sachin's game should be above suspicion, thus redefining the good old ' Ceaser's wife needs to be above suspicion'.

That is what gets him a mass fan following not only from the people watching the game but from his peers and senior players in the game of  cricket.

Being a Tendulkar fan, is not a just a guy thing.
My grandmother’s elder sister who is currently hovering around 90 years of age is a die-hard Tendulkar fan. She still curses her son for not getting her cataract operation done well before the time Sachin was playing  his final match at Wankhede stadium.

Anyway you do not have to follow cricket to appreciate Sachin's qualities.

Here is a Tendulkar Fan who rose to prominence during the world cup. 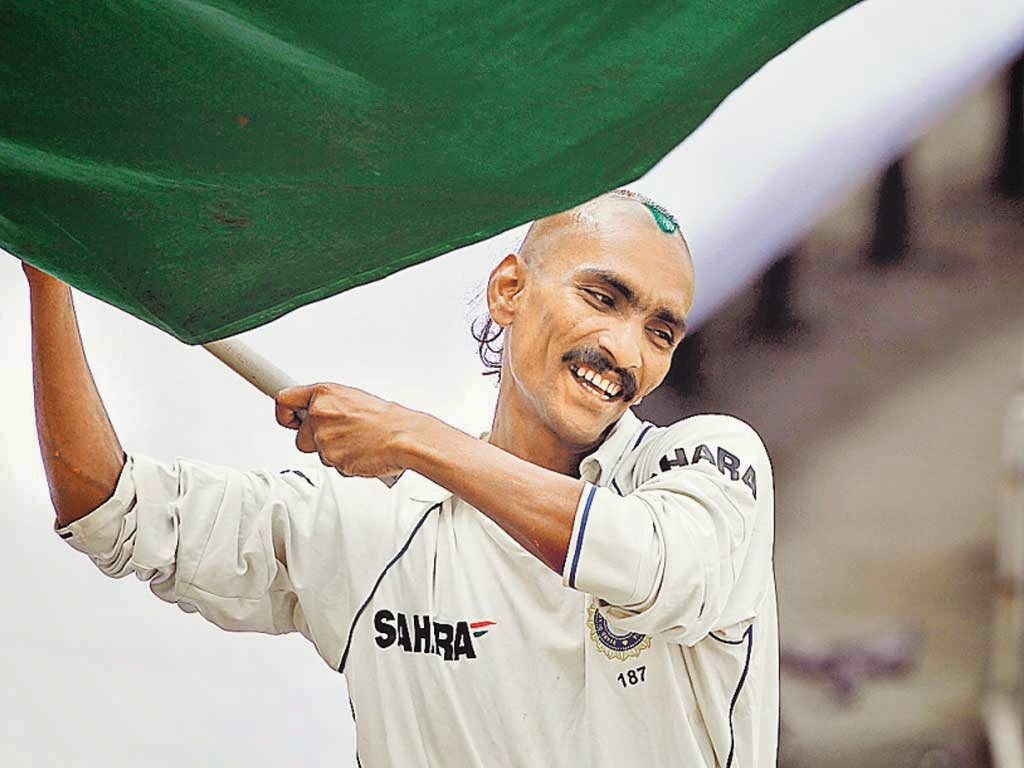 However this is not how people recognise him.

He is widely recognised for showing up at every home match the Indian team plays since 2003, with his body painted in the national flag of india.

Sudhir kumar Chaudhary is a Sachin fanatic. He paints his body on the previous day of a match and skips sleep that night to preserve the paint on his body. 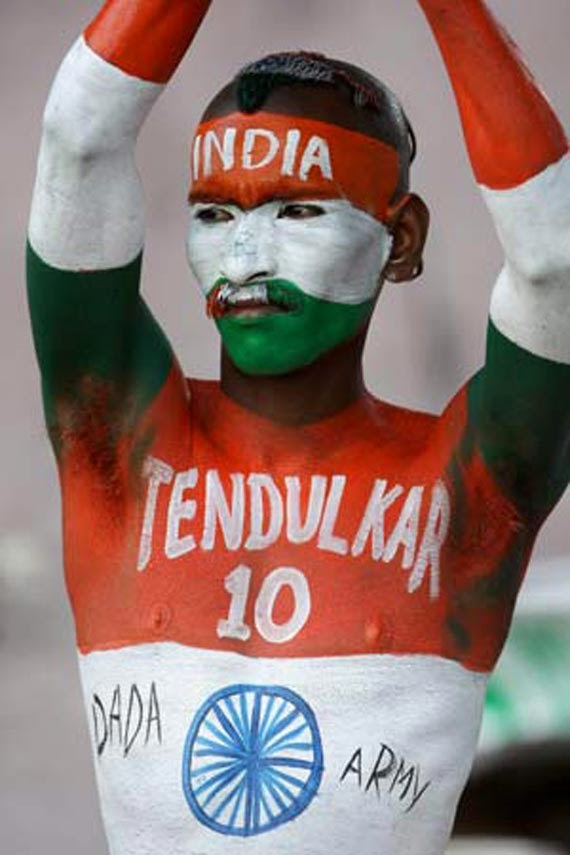 He has managed a wikipedia entry solely on the identity of being a fanatic fan of Sachin Tendulkar.
Read more about Sudhirkumar Choudhury over here.

Of all the fanatic Tendulkar fans here is another one that bowled me over.

Watching the last match in November at the office pantry.  Here is a man who like scores of Indians has followed Sachin’s career and is a load of information on Sachin.

He rattles off with ease, information about Sachin's batting style, his best partnerships and an entire load of statistics from all the years of  Sachin’s career.

I happened to be watching Sachin’s last match over a cup of tea with Waseem  and learnt a lot more about Sachin than I knew in all these years of his career.

The thing about Waseem is that he has not seen Sachin play.
He has only heard them . ( More about Waseem in yet another post)
Or rather it does’nt take two functional eyes to be a Sachin Fan .. does it ???

Coming back about this thing on getting my car insurance renewed.

I bought my car about four years ago around this time. My car was going to get delivered.They called up to inform that I could collect it anytime after the 22nd.
Amma insisted it had to be the 24th, not the 23rd or the 25th because it was an Auspicious day.
Auspicious-  because it was the Sachin's birthday.

This post is dedicated to all the Tendulkar fans on the eve of Master Blaster’s 41st Birthday.

- April 23, 2014
Email ThisBlogThis!Share to TwitterShare to FacebookShare to Pinterest