When writing about delicacies, it would be unfair not to write about Baklava and Kadayif – those two amazing Turkish sweets . Unlike Kadayif, Baklava does get sold in commercial varieties in super markets.
Take it from me, those commercially sold varieties of Baklava are an  insult to what a Baklava should look, feel and taste like. You would never touch them, if you have known the taste of the real one.
To taste the real Baklava and Kadayif,  one heads to Antepliler Patisserie, in Haringay lanes in North London.
( I have’nt been to Istanbul yet … but I am willing to take a bet)
Here is an old review from the Guardian about Antepliler and other Turkish restaurants in north London.

A lot has changed at Antepliler since then, but thankfully the quality and taste of their food has not.

Situated in a predominantly Turkish suburb, Antepliler and the number of other Turkish shops and eateries that line the street cater mainly to the migrant Turkish population in and around the Haringay lanes. It is here that one gets to taste the authentic Turkish food.


We discovered Antepliler accidentally a few years ago.

Dilek, a Turkish colleague of mine was celebrating her birthday on that day. It was a long day of meetings at office with visitors and there was no time to head out for a cake or a drink.  Dilek, called up her ever resourceful dad and asked him to get some Turkish sweets for all of all of us who were  cooped up in the day long meeting. That is how two boxes of Baklava arrived that afternoon.

It was an orgasmic moment. That  moment  when I tasted my first piece of Antepliler Baklava.  The box of sweets got over in no time and the day long meeting just did not seem to realize the concept of time. At the end of that long day, I was still pining for one more piece of that sweet. I made enquiries from Dilek about the sweet and where one could get it.

That weekend we headed off to Haringay lanes and discovered Antepliler.

Years ago when Turkish migrants came and settled down around Haringay lanes in north London, many would miss the Turkish cuisine. ( Oh- so- much- like- all-fresh-immigrants ) .  As more Turkish families settled in London to make a living, they started out on their own and set up small eateries which served the local Turkish fare for the home sick immigrant Turk. Soon there were number of eateries and patisseries that sprouted along the Haringay lanes .
With years, the immigrant population prospered and the eateries got refurbished.  The cosmopolitan London got introduced to Turkish food through word of mouth to other ethnic groups in much the same way Dilek introduced us to the wonders of Baklava and Kadayif.


At Antepliler, the Baklava and Kadayif are made afresh and replenished the moment the stock is sold out. The stock typically gets sold out in hours. Sometimes in minutes. Especially at around 7.00 pm in the evening there is a crowd that lingers around Antepliler, mostly made up of immigrant Turks but also some others who have discovered the wonders of this delicacy.  By about 7.10 pm about two or three of these huge trays are usually sold out. 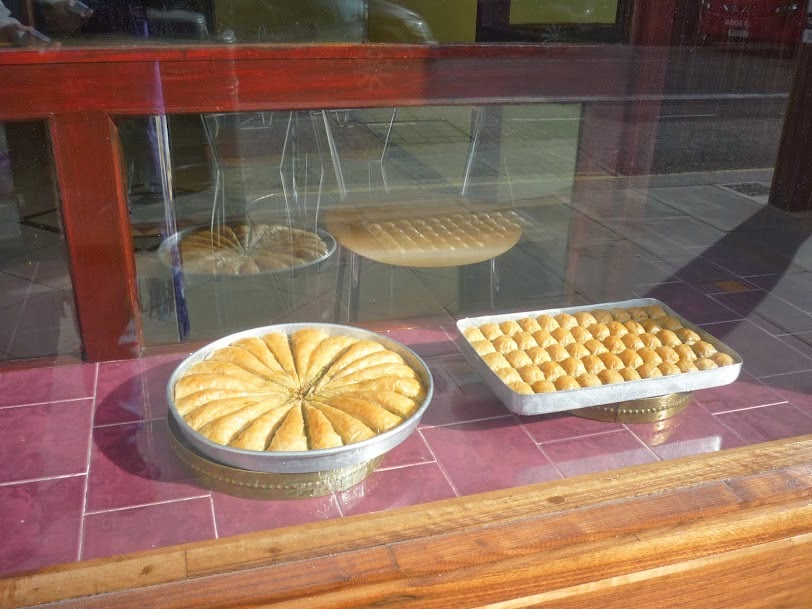 Over the years , the popularity of her signature dishes rose to newer heights and there were more customers Turkish and non-turkish flocking from all over.


As it happens to all small businesses that show the promise of profitability,  Antepliler got taken over by a new management. Antepliler got refurbished into a swanky patisserie accompanied by an adjacent fine dining eaterie that served Turkish food with French wine. The prices on the menu card also shot up northwards. But that did not diminish the number of customers that flocked the patisserie.
This time around when I went visiting, the old Turkish woman stumbling with English was not around .  In the newly refurbished, amongst the bright and stylishly done interiors of Antepliler  were two young girls, possibly students doing part time work at the patisserie who spoke decent English and trained on customer service and increasing sales.


I was used to the familiar charm of that unassuming shop with was manned by the old Turkish lady who smiles brought wrinkles under her eyes.  I was not sure about how authentic the Baklava and Kadayif would taste under this new swanky management.  I decided to taste a piece each of Baklava and Kadayif  to reassure myself that the delicacies that I have cherished so far have’nt changed in taste and quality under the new management.
I need not have worried.  There could not have been any compromise on Antepliler’s core competence that is its pistachio and walnut  rich Bakalva and Kadayif soaked in floral honey.  It was just as one would expect  in its original taste, quality and appearance.  I instinctively knew the old Turkish lady’s passion, love and chemistry had gone into their making.
I decided to pack up a kilogram each of these sweets. This time around it cost me a bomb despite the recession.  But, what the heck, I was willing to pay.  So were the others I guess.
As I paid for Baklava and Kadayif,  I thanked the girl at the checkout and struck small talk with her. I told her how much we relished and loved this delicacy. I explained how far we would travel  everytime we yearned for  Antepliler’s Baklava and Kadayif.

She tried overselling it by telling me this was the original  baklava and kadayif in town and that they employed a chef from Turkey to make it fresh everyday.
I so badly wanted to tell her that over the years there were hundreds if not thousands that have been charmed by this unassuming old lady’s signature recipe that gets this new swanky Antepliler its soaring profits, come recession or not.  But I let it pass. May be because she got busy texting on her mobile phone.

I walked away happy and sad in equal measure.
Happy because now the old Turkish lady need not stumble with her English and could concentrate on making her signature delicacies of Baklava and Kadayif somewhere in a kitchen behind Haringay lanes, while these young employees did some hard sell for her Baklava and Kadayif under the new management at the patisserie.
Sad- because the old lady would never derive the sense of gratification of seeing the long queue of salivating customers at 7.00 pm every evening waiting to buy  Baklava and Kadayif, her signature recipes soaked in lots of pistachio, walnut, honey, passion and love, all in equal measure.

I silently wished well for that Antepliler’s   ‘chef whom they  have hired all the way from Turkey to make it fresh everyday’.
This was the lesson that I learnt that day.
Most things that give the greatest pleasure are usually the work of art made by the simplest of people.

And more often than not, these simplest of people do not ever realize the monetary worth of their creations.  May be that is how it is meant to stay.

- April 04, 2014
Email ThisBlogThis!Share to TwitterShare to FacebookShare to Pinterest