It was the election day.
I set out with my voters id card and booth slip to cast my precious vote to the usual polling booth just 200 mts away from home, only to be told by the officials that my polling booth had changed to VIBGYOR School. ( yes the one made infamous by the leopard visit a couple of years ago) .

I check on Google maps and it says 1.8 kms 21minutes by walk.  Navigating through the treeless concrete jungles of Bangalore in the oppressive heat of May is’nt exactly very appealing.

Truth be told, I was not always a very conscentious citizen, however I have been taking my voting rights seriously off late.

The vehicles parked on the main road,exactly 200 meters away from the polling booth with the symbol of a certain flower would have a happily offered me a free ride to the other polling booth. But I obviously could not take their favour.

Newton would certainly not have done that.

With the mission accomplished, I was proudly showing the voters 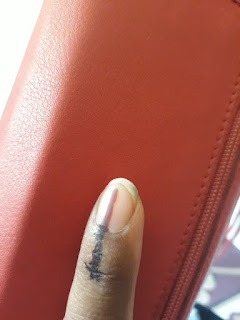 ink mark on my index finger and I let my niece know that I had breached my quota of 10000 steps for the day.

‘What does a polling booth look like’ asked my curious 17 year old niece who is worried she would narrowly miss her voting eligibility for the elections next year whereas her classmate older to her by two months would not.

I started to describe the polling booth … and I paused.

Instead, that evening on Amazon Prime … we watched the movie ‘Newton’.

I was watching it for perhaps the third or fourth time, but who cares, some more laughter therapy could only do you good.
Newton – Nutan Kumar is a small town millennial boy who is idealistic and follows his idealism with stubborn conviction . With a protagonist like that, Newton could as well have turned into a serious boring art movie, which it is not. If anything it is a satire and I am told falls under the Genre of ‘Black comedy’.

Told from the view point of a Presiding officer who is randomly appointed to conduct elections for 76 tribal voters  in a remote  area in Madhya Pradesh infiltrated with Maoist insurgency, there is not much to tell by way of the plot.

And that is the plot.

It takes guts to make a movie on a topic as mundane as the election process.

But that is what is so heartening about the new age cinema in India.  Every once in a while you have a small budget movie that hits the box office with yet another refreshing perspective and makes you wonder, if this is what could be the new phenomenon called disruptive cinema.

The icing on the cake was that Newton is India’s nomination to the Oscar this year. ( thank god it was not bahubali )
Rajkumar Rao is not exactly what one would call a typical ‘Hero’ of the movie.  Nutan kumar is his original name that he claims to have deliberately misspelled in his tenth marksheet application and got rechristened as Newton kumar.

Idealistic, stubborn, rule-book abiding and fearless, Rajkumar Rao plays the role of Newton to the hilt that it gets difficult to differentiate the actor from the character for a long time.

Atma Singh the cynical, hardened army officer who is entrusted to provide security for the polling officials to carry out their duty is played by Pankaj Tripathi and he too leaves a mark way after you have finished watching the movie.

Malko, the local school teacher has a small but significant role. Played by Anjali Patil , the girl from the forest leaves an imprint on you, especially with her gorgeous eyes and realistic acting.

It would be unfair to leave out mentioning Raghubir Yadav who plays the middle aged, cynical and lethargic polling officer that we must have all across sometime or the other in a government office.

He is a genius of an actor. No role is too small for him and he proves it yet again in this movie.
I just stumbled upon this trivia sometime ago.  Of the four movies from India that have hit the Oscar nominations circuit three have starred  Raghubir Yadav.
Mother India made it to the Oscar much before his time. Apart from that Salaam Bombay, Lagaan and Water have featured this lucky Oscar charm … Raghubir Yadav.

Newton is introduced to us in the first scene eating an apple, but it is the punchline at the very end of the movie that leaves you ROFL as the credits roll on.
‘Ji kuch nahi ... yeh mere kuch actions key reaction hai … ‘

When you search the deeper meaning to the movie, just like I did you may google around to refresh the three laws  by the original Newton (that scientist fellow ) .  The third one is very popular, but it is the first and the second one that are tricky especially if you have not paid attention in your physics class in school)

1. Every object in a state of uniform motion tends to remain in that state of motion unless an external force is applied to it.

2. The rate of change of momentum of a body is directly proportional to the force applied.

3. For every action there is an equal and opposite reaction.

Watch Newton (the movie) and interpret the Newton’s ( the scientist) laws in the context of contemporary India.

There lies the beauty of the movie.

P.S : Oscar or no Oscar, It is a movie that all TV channels should telecast 24-48 hours before the election day after all campaigning has stopped.
It will stir something in every citizen’s conscience and will get them to strut their butt and get out to the polling booth and vote.

Ok ok ok !!!  for the rest of the world a ‘second day second show’ may not be a big deal.
But for us the Brave Bangalorean Thalaivaa fans it was actually the first day.  Albeit the second show.

Cannot still understand why HDK Anna created such a fuss and stopped Rajini Anna from releasing the movie in Bangalore. It is besides the point that he relented after the first day and let the movie show in bangalore theatres.  HDK – Anna  - this was free post election propaganda for your party and your allies who benevolently bestowed the power on you.  Chill Madi.

Having bunked half day at office and braved our way through the Friday afternoon bangalore traffic for the second day second show , it was a heart sinking feeling to see no cut outs , not even a poster of the ‘Thalaivaa’ at the Cinema theatres.  Deliberately empty billboards hurt, really hurt. 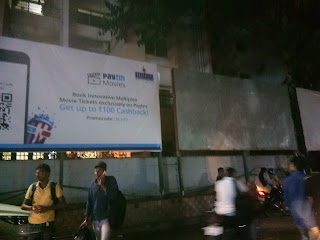 After all what is a new Thalaivar release without the huge cutouts, lengthy garlands, fire works and the now defunct  ‘Palabhishekam’.
Pchhh … jaane kahaan gaye woh din …

Or may be it is just in Namma Bengaluru .
Anyway all that is now water under the k...... bridge.

Once the Brave Bangalore  ‘Thalaivaa’ fans silently got into the cinema hall, energy levels and excitement hit the roof.  Thalaivar’s entry was not exactly spectacular. But the shrill whistles blew anyway, voices shrieked out and the empty plastic bottles flew in the air.

What was really unfair was that it almost felt like Nana Patekar in the second half of the movie had a far more spectacular entry than the Thalaivaa himself. Looks like the director got his priorities wrong.

Set in the backdrop of Dharavi is this benevolent Mafia leader playing gully cricket with his grandchildren. They are fighting  against the builder mafia that is politically connected and has set its eyes on land in Dharavi the famous slum in mumbai.

Dravidians versus the Aryans ?
Blacks versus the white ?
Poor versus the rich ?
Secularists versus the fundamentalists ?
Ravana versus  Rama ( note this is not Rama versus Ravana but the other way round)
Modi versus Sonia
North versus South
Kaala is a cinematic simulation of the real life political khichdi

Every dialogue, every costume, every actor and every set leaves you guessing …
Aiyo …. Thalaivarey  where exactly will be your political leaning   ?

With no other bankable star presence other than the most bankable SUPER STAR himself, the film in its totality does not seem to ring the bells and its producers are not exactly laughing their way to the banks.

But then this is no movie review. Like they say there are no good movies and bad movies when you watch a Rajini movie.

Such classifications are for the lesser movies and lesser mortals.

Apart from ‘Thalaivar’ himself who has done a role that fits his age and his current agenda of making an entry into the TN political scene, all other actors have done a fairly good job.  The legendary Nana Patekar could have got himself a dubbed voice when speaking Tamil. It was not easy on the ears watching him fumble with his Tamil. ( Perhaps he was trying to enact Modi to perfection who knows ?)

Noteworthy among others were Anjali Patil ... ‘Puyal  Charumathi’ who has rendered her role to near
perfection.
She is one upcoming actor to watch out for …

Was happy to see that two of ‘Newton’ lead artistes Anjali Patil and Pankaj Tripathi have got a break with meaty roles in a ‘Thalaivar’ movie. Apparently Pankaj Tripathi signed up for Kaala only to meet Rajinikanth.

A long pending post of the review of that award winning movie ‘Newton’ will follow next … stay tuned to this blog site.
I promise to wake up from my long hibernation .
Is’nt that the effect a ‘Thalaivar’ movie is supposed to have on you ?