When the lights turned red ...

When the lights turned red ... 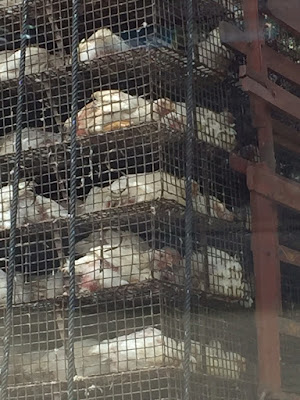 I clicked this as the van before me and I were destined to spend precisely 133 more seconds at the traffic light.

That is what the red light ticking by seconds indicated. Enough time to pull up the mobile camera and click away although I will have to scribble my thoughts later. .The scene before me was grotesque. I rolled up my windows to quell the stench and turned on the air conditioning. But I could not escape the sight.
They were so docile. As though they knew what they were destined for and the futility of fighting over a better view or more space compared to the fellow chicken stuck in the coop. Certainly they must have learnt the lessons over a period of time.

How long could that have been ?
Since the time they were picked up from the poultry farm.
Was that this morning ? Yesterday ?
Whatever. Could not have been long ago.I noticed some were injured. Some had their legs broken or stuck in between the wire mesh.Initially the vegetarian in me felt a rush of 'Holier-than-thou-feeling' surge out of me.I cut that line of thought  immediately.
This was the way of life.Chicken coop or cubicle jungle or the corner office. Isn't it all much the same.

We learn our place in the scheme of things sooner or later.
We acknowledge the pecking order over time.
We realize the futility of putting up a fight depending upon what our survival instinct tells us at that point in time.The car behind me is honking. The green light will be on in 9 seconds and I get into the drive mode.It is yet another day at work.
- January 16, 2016 No comments: Links to this post
Email ThisBlogThis!Share to TwitterShare to FacebookShare to Pinterest 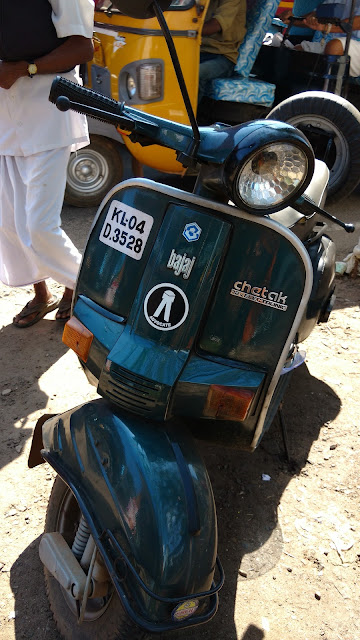 It was parked in front of a medicine shop at a busy intersection in a small town in Kerala.

It ain’t no Ferrari …Mercedes …  BMW … Audi or even a Skoda.

But there were quite few passersby in whom it evoked that strong sense of nostalgia when they turned around for a second glance and looked at the beauty. The awe it inspired in its hey days was unparalleled.

If you know what that could mean, you for sure are a balding, greying middle aged man  ( or woman ) by 2016.

Bajaj Chetak .. the iconic scooter from the house of Bajaj came to India in 1979.

It was modelled on the  Italian  version of Vespa.  Made famous by Audrey Hepburn in Roman Holiday in the 60’s

There were luna’s,  scooty’s , TVS champ and countless number of motor bikes that came in and went away from the market.

But none really managed to hold the appeal that belonged to the Chetak.

Chetak, named after the warrior horse of the brave warrior Maha Rana pratap you would assume stood for all things macho and  daring.

To the contrary, Chetak stood for memories of a small and happy family. A family of Daddy, mummy and the two kids. The icon of middle class in the mid 80’s when family planning was in thing. The small family, happy family rode on Bajaj Chetak and seem to beam radiance and happiness from the TV commercials that beamed on Doordarshan. Soon every middle class Indian household yearned for one.

It was the prized possession to be given in dowry for a prized groom before Maruti 800 usurped its position in the dowry market.
In its Hey days the waiting time for Bajaj Chetak ran not into months but in years.   At the peak of licence Raj ( the 1960’s – 1991) there was not much choice in the market with models, designs and brands. This was the india of the 1980’s when Doordarshan was the only channel and the most glamouous and awaited programme  on Friday evenings prime time was Chitrahaar.

Legend has it that when Joshi uncle landed a permanent job of a lower division clerk  at the nationalized bank, his parents were flooded with offers for marriage alliances from near and dear. Much to his mother’s disappointment, Joshi uncle chose the dumb , dull witted and dark skinned  Joshi aunty over all the other  photographs  of the potential young and beautiful brides presented to him. 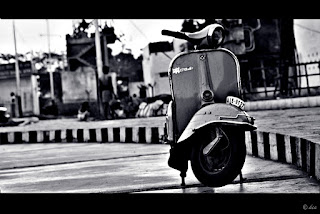 All because, she came with the promise of the Bajaj Chetak in her Dowry.

‘Beauty lies in the eyes of the beholder’, he must have convinced his disappointed mother, with a very clear mental image in his mind of what beauty he was longing to behold.

And thus they were wedded and laboured along with life.  A couple of years into their marraige as Aunty Joshi went into labour at her mother's house uncle Joshi received the news.
Delivery this Saturday, it mentioned with the address.  A beaming uncle Joshi applied for his earned leave at the bank ( there was no paternity leave policy then) and set out eagerly to the showroom  while aunty Joshi was wheeled into the labour room.

As Aunty Joshi's contractions began, uncle Joshi revved up the engine and set out for the maternity home.

Thus were delivered on that momentous saturday, the two Chetaks.
The Joshis Chetak and Bajajs Chetak.
Oh well... and then they all lived reasonably  happy ever after ...

( watch this video which is now more than two decades old )