Life on the slow track - Vada pao at Karjat Station 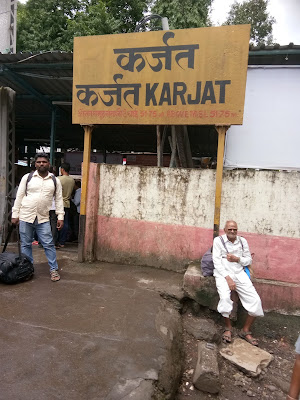 Aboard the train from Mumbai to Pune as the skyscrapers of the megapolis fade away and a more soothing weather permeates around you, you know you are approaching Karjat station.

The ascent to the hill stations of Lonavala, khandala and Matheran start from here.  If it is the monsoons, the misty clouds would definitely float over the Karjat station.

Among long distance train goers, it has been a long-standing tradition to taste the Vada pao at karjat station irrespective of what has been packed into your lunch boxes for the long train journey.

There is a quaint old-world charm about the karjat station especially when you relive those memories as you bite into a soft and spicy Karjat Vada pao.

Vada pao – is India’s rather Maharashtra’s answer to Americas Burger. However, to the Indian taste buds a burger and a Vada Pao are poles apart. At least the McDonald’s burger or the one from Burger king.  Attempts have been made to 'McDonaldize' Vada pao by some Neo MBA types with large funding from venture capitalists. Thankfully their attempts have not really taken off. 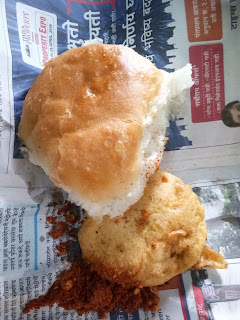 There is no comparison to a freshly made Vada pao. A ball of boiled potato mixed with boiled peas and spices, is fried with gram flour paste in oil like a fritter and inserted in between a layer of soft bun (pao).  Strictly that would be Vada and pao.  But the icing on the pao is the dark red garlic chutney and a fried green chilly that is inserted between the Vada and the pao.  The quality of the latter solely determines how mouthwatering your snack would be.

Best eaten hot and spicy, during a defeaning downpour, Vada pao evolved from being a staple food for the mill workers of Mumbai in the 1940s and 1950s.  It was a wholesome quick snack that you could grab and bite while on the go and satisfy your hunger pangs while on your way home.

Typically, Vada pao outlets are located at railway stations, bus stations and areas where there is a huge footfall of working-class population. Every college also has its reigning Vada pao vendor.

Shiv sena, the local political party of Maharashtra patronized Vada-pao as a working-class snack. Over the years it became the official snack of the Mumbai megapolis. It is the ideal snack for a population that is always on the move.  The maximum city that never sleeps. 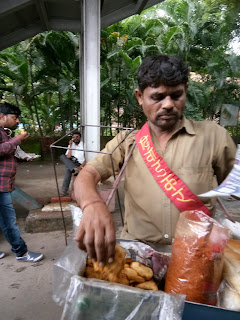 There is something about having a Vada pao at Karjat station. As you train stops by, you only need to look out and there would be a vendor with the customary ‘Diwadkar’ embroidered in a red band across his khaki shirt, wearing a white topi, waiting with a tray full of hot Vada and fresh pao with a vessel containing the dry garlic chutney.

For a mere ten rupees he could quickly dispense a Vada inserted in pao, smeared with the red chutney along with the fried green chilly on a newspaper wrapping to suit your taste.
Eco friendly, biodegradable litter and no trappings of the brand placement for the Diwadkars despite the volumes that they sell. Their quality speaks for them.

The stop at Karjat station for most trains is a mere five minutes.  And yet you are never short of time, because there are so many of the Diwadkar’s mobile stalls right in front of your train window, that materialize as soon as you have decided to buy your Vada pao.

It is all done very efficiently and with minimum fuss.
As your train jerks and moves on, your mouth has already been salivating for a few minutes now. You cannot hold up anymore. You give in and bite into your Vada pao and the pungent taste of Garlic, the savories of the boiled potato and crispiness of the Vada along with the softness of the pao compete to seduce your taste buds. It is the softness of the pao that eventually wins. Unfailingly fresh and hot, Diwadkar’s have maintained a standard for which the Karjat Vada pao is known for.

There are many Vada pao outlets all over Mumbai, Pune and the rest of Maharashtra. Everyone has their favorites. For Vada pao not only triggers your taste buds but also your memories.
Memories of places visited and times gone by.
And here is one such nostalgic indulgence.

As you walk up the Dadar – tilak bridge from Dadar west, you come across Sri Krishna Batata vada. It is a thick crowd of commuters that have alighted the Dadar station and are bound to catch a bus that would alight at the Tilak bridge just a few staircases away.  You pull out a coin as you straddle through the crowd, hand it out, pick up your token, walk to the next counter and pick your Batata vada wrapped in a newspaper with a green chilly and chutney for accompaniment.

On any given evening at Sri Krishna Batata vada at Dadar, a hundred Batata vadas are dispensed at the blink of the eye.  You have no patience to stand and watch and take a bite. The commuters are gradually pushing your upwards to the bridge. You could be a college student, an office goer, a mill worker or a hawker. No one has the time or space to stand and watch.  That is when you grab your Batata vada, tuck it in your hand bag and make your move.

As your bus pulls up, you board your bus and settle down in the usual window seat.

There is a mild haze in the air, birds from the trees of the Hindu colony in Dadar, are screeching their throats out to announce the onset of sunset. You look out of the window seat and realize that the sky is turning a blushing pink.  Yet another day is coming to a close, you have had a long day of field work. Your destination is still another half hour to go and hunger pangs cannot wait until  then.

That is when you unzip your bag, unwrap the oil soaked newspaper and pull out the Batata vada.

Unlike the Diwadkar’s of karjat, Dadar’s Sri Krishna do not serve you the pao, but just the 'Batata vada' - the potato fritters, along with the green chillies. You bite into the hot, pungent batata vada and the taste of mashed potato, spicy chilly and pungent garlic hits your taste buds all at once.

When you have finished eating your Batata vada and are still on the move, the taste still lingers on your taste buds for many more minutes.

But it is the memories that linger on for many many years to come.

P,S : Many many years later in a upmarket airconditioned mall in Bangalore, old friends catch up and reminisce .
This post is dedicated to all those TISSians of the '90s who boarded the Institute bus at the Dadar Tilak bridge in the evenings. .

- April 05, 2019
Email ThisBlogThis!Share to TwitterShare to FacebookShare to Pinterest