Raise that finger and show it to ‘em


It is that time when the citizen is the king.  When democracy comes alive and the mighty and powerful come down kneeling to ask to be voted to power.

Thanks to Election commission (and perhaps demonetization) , this year’s run-up to the elections is devoid of the massive fanfare that it used to be in the yesteryears.
Absence of those massive cut outs,  mid night political rallies, cash and spirits flowing like water in exchange of promised votes gives us some hope that sanity will prevail in this democracy atleast in the future.
Perhaps I am  being naïve...
Perhaps there is a lot going on behind the screens or underground.
Perhaps our politicians have evolved and have devised other jugaadu ways to hood wink the election commission…

But the change on the ground is visible.

More than the rallying from the political parties, it is the rally from the election commission and the citizens urging everyone to go and cast their vote, that is worth taking note of.

For if we do not do our bit, we are equally responsible for the mess that our politicians create when voted to power.

While Bangalore’s immigrant population has been vociferous about their missing votes, there are celebrities that are urging their fans to go out and cast their vote on twitter and facebook.

Here is one such plea urging citizens to go and vote that was painted on the walls of a government primary school building in a village on the banks of Narmada river near Khandwa in Madhya Pradesh that had me in splits as I clicked ... 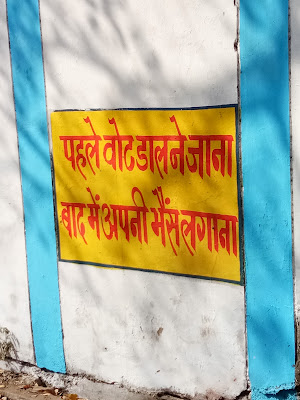 (Literal translation : The first thing on voting day – go cast your vote.  You can then take your buffaloes out to graze)

Hilarious as it sounded at first, on second thoughts I thought it had a universal appeal.

We all have our buffaloes that we need to take out to graze .  Metaphorically speaking.

It may not be the rural hinterlands on the banks of Narmada, but in the air-conditioned cubicles and cabins of those tall glass buildings that some of us take our buffaloes to graze’.

But vote we must.

And for that it is OK to take time off.

So without much ado… Go out there and vote

Raise that (index) finger and show it to ‘em

- April 14, 2019
Email ThisBlogThis!Share to TwitterShare to FacebookShare to Pinterest