Life on the slow track - BANANA BUNS IN UDUPI 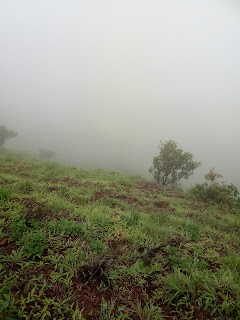 It is about 1.30 in the afternoon and the town of Kollur is in a siesta.  A soothing silence and peace has engulfed this little town. Dark clouds that threaten a downpour anytime pass by peacefully as though they too are on an afternoon siesta. The temple around which the entire economy of this little town in built is closed until evening. The shopkeepers too are on a siesta.

As you walk up to the Kollur bus station and sit inside the only bus that leaves for all places outside of kollur, including Udupi, you realize the driver is also having a siesta on the long front seat. The conductor is the only man on duty and he is out smoking a cigarette.  He is happy for the lone passenger to board his bus and quickly goes out to solicit more of them. Unfortunately, he does not find any.

It is a lovely window seat from where you get to view the lush green mountains and feel the slight nip in the moist air of Kollur.

As the bus takes off you take in the hazy experience of watching the landscape. In about three to four hours the landscape drastically changes from the greenery of the mountains to the barrenness of the plains especially when the bus takes the fast route on that freshly built NH44.
The freshly felled trees are an indication of the newly built National highway that pierces through this place would be expanded into an eight-lane highway.  On the yet to be expanded national highway are huge billboards advertising gold and diamond jewelry showrooms, newly found educational institutions guaranteeing 100% job placements and infertility clinics with 99.8% success rate of producing children for barren couples.

The traffic gets dense as the long vehicles from the Mangalore port, the trucks, the tourist buses and the plush cars whiz past at dizzying speeds.

Travelling from Kollur by a bus, it is amazing to see the landscape of these coastal towns change rapidly as you move towards the plains. 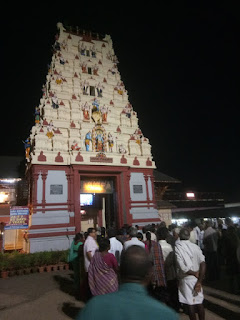 As you close in to Udupi, the weather gets warm and humid. There is a saline tinge in the air. Your arrival into the town is evident as the traffic gets denser and the central part of Udupi town emerges. It is a noisy and busy bus station, quite a contrast to its quiet and quaint railway station.

The bus conductor calls out for passengers alighting at Udupi to hurry up. As you alight, the noise, the crowd, the chaos, the huge billboards of this not so small town hit you hard.
Udupi Lord Krishna on whom many a composition has been composed and sung by Carnatic musicians is the reigning deity of this town.

Udupi Sri Krishna temple around whom the entire town grew over the years is about ten minutes’ drive away from the bus station by an autorickshaw. The streets surrounding the temple are cordoned off for vehicular traffic.

At the center of squarely built streets stands the Udupi Sri Krishna temple with an imposing but petite architecture.  Surrounding the temple on the wide pavemented streets are, various institutions run by various ‘Mutt’s who are headquartered in Udupi, one of the five important Krishna temples in India. 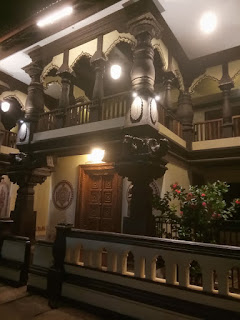 The aesthetically appealing architecture, grandly lit facades and delicately designed wood work make these ‘Mutts’ stand out and should loud to say that once upon a time these institutions thrived in this temple town. This place is also a prestigious platform for performing artistes to showcase their art.

In the olden days these mutt’s would offer shelter and food to devotees who travelled from afar. Before the roads were built and rail roads were laid, undertaking a travel must have been an arduous affair. Travel must have been more for pilgrimage purposes than as a family outing or a youthful adventure.
Depending upon your affiliation in your home town, you checked into a mutt that had its branch in Udupi.

Times have changed. The Mutt’s let out these rooms for a small amount. But not before checking your antecedents and affiliations of caste, sub-caste and religion. It is not a commercial affair and no one solicits business here. You get referred by someone who has been there or someone you knew from your home town.

One such mutt is the Uttaradi Mutt. An institution that has perhaps seen better days in the past.
A ‘China Bazaar’ shop selling cheap plastic items and fake Puma track suits for 200 rupees camouflages the entrance to the Uttaradi mutt.     However, as you enter the Mutt, a different aura engulfs you.  The front yard is decorated with  a Tulsi alcove. (Basil – shrub considered to be Sri Krishna’s consort). A woman renunciate, a Krishna devotee is arranging the flowers and the copper vessels at an unhurried pace perhaps getting it ready for the evening pooja ritual to the Tulsi Alcove.   Time seems to flow slowly and peacefully inside the Mutt.

Inside the Mutt is a big hall and on the altar is a huge brass sculpture of Sri Krishna, very tastefully decorated. On the first floor from where you can oversee the happening in the hall are the rooms available for rent. In the room you get freshly laundered bedsheets and pillows on the double bed and a spotlessly clean bathroom.  No frills like air conditioning, bottled mineral water or room service.  It is a place for devotee and pilgrims coming from faraway places to refresh and move on.
As you step out of Uttaradi Mutt, you witness that Opulence is in the air.  This is ‘Krishna’ land. A ‘darshan’ of the richly decorated idol of Udupi Shri Krishna is relayed to devotees through LED Televisions all around the temple as well as at the entrances on all four sides of the temple.   There are rituals performed six times during the day.

At the temple auditorium a young girl with two accompanying artistes, one on the harmonium and another on a tabla is performing a dance drama known as the Hari Katha. The Chairs in the auditorium are all taken and people are sitting and standing across the stone walls of the temple mesmerized by the performance.

Sraddha is probably in her late teens, hails from Kasargode another coastal town not far from Udupi. Her performance is awe-inspiring.  She wears absolutely no makeup, sans her bindi.  Her hair is nicely oiled and plaited into a single braid. Dressed in a blue long skirt (Lehenga) and red silk blouse, she is standing at the middle of the stage reciting the ‘Srinivasa kalyanam’.  The marriage of ‘Tirupati Venkatesha’ to his consort ‘Padmavati’ .  While the format traverses through the various avatars of Sri Vishnu, Rama and Krishna being two among them, the story telling is interspersed with teachings from the Bhagavata Puranam. 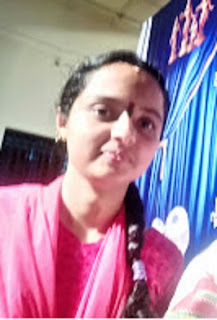 Her recital is in Kannada, the local language and the compositions are by Purandaradasa, an eighteenth-century composer believed to be the earliest founder of Carnatic music. The story is that of Vishnu Avatar’s and Bhagavata Puranam.
As she bursts into songs, stories and anecdotes while reciting the story her expressions, her tone and her demeanor change. On her right hand in a cymbal that she plays in order to keep the rhythm and add music to her recitals, she is accompanied by two men, much older to her, one on the harmonium and the other on a tabla. As the evening progresses, she intersperses her songs with recitals and adds a modern-day contemporary touch to it.  When she bursts into ‘Venkata chala Nilayam … vaikunta pura vasam’, the composition by Sri Purandaradasa describing, Sri Vishnu’s abode in ‘Vaikunta’, the audience is spell bound and the applause across the auditorium reaches high decibels.
And yet she is an unknown, unsung artiste of an art form that has few takers at the wider level. As the performance draws to a close, the father of the young artiste is introduced.  The audience, mesmerized by her performance, put together their hands for a huge applause for nurturing this young talent.

A very shy and introverted Sraddha thanks the audience who have walked upto her for the compliment and moves closer to her father, while busying herself packing her backpack with her belongings as they wrap up the show.
Neither Sraddha, nor her father have plans for her to pursue this art form as a full-time career.  At that point in time they are just thankful for the Temple authorities to have given her a chance to perform at the Udupi Sri Krishna temple.

There must be many like Sraddha in small towns like Kasargode and beyond, whose talents will sadly never be recognized by the wider world. But it opens your eyes to the depth of talent and devotion to a less known art form that lies hidden in the hinterlands of India where a rich and ancient culture thrived and promoted story telling as an art form for many centuries over.

Udupi in the contemporary time is known for its iconic brand of restaurants all over India that symbolize the typical ‘south Indian’ food.  They do not exactly operate like a restaurant chain or franchise, but are eateries across all segments run by families who have their roots in the coastal Karnataka region ranging from Mangalore, Gokarna and Udupi. 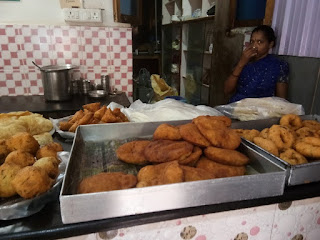 Their unfailingly standardized recipes that originate from this region have come about to signify your typical South Indian cuisine in the far-flung regions of India.  Although the South Indian cuisine is much more than the standard fare of ‘Udupi’ Masala dosa and Ghee roast dished out with a slightly sweet sambar and coconut chutney. 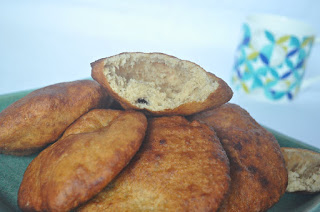 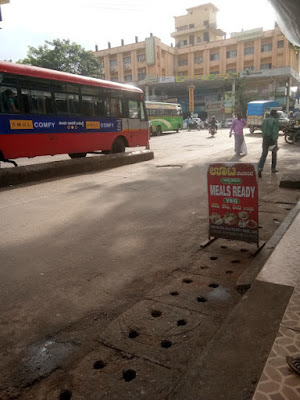 Much lesser known among the Costal Karnataka delicacies is the Banana bun also known as the Mangalore Bun. It is a bun that is not baked but fried and makes for lovely snack. Slightly sweet in taste, it is made with overripe mashed banana, mixed with dough that has been fermented overnight. The Dough balls are then flattened and fried in oil. This slightly sweet snack is best savoured hot with a splattering of coconut chutney.

- April 19, 2019
Email ThisBlogThis!Share to TwitterShare to FacebookShare to Pinterest