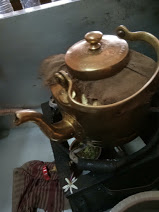 ‘Chaha’ at an Amruttulya
Tulshi baug, in Pune has been a Waada (neighbourhood) with a recorded history and inhabited since the 1700’s if not earlier. In the earlier centuries it was far from the overcrowded, chaotic, busy market place that it is today.
Naro Appaji Khire Tulshibaugwale (1700-1775), the Subedar of Pune during the Peshwa rule built an ornately sculpted Ram temple in his sprawling estate which was completed in 1795, in this neighbourhood which would later be known as Tulshibaug.  Over the next 200 years civilization would thrive  nurturing trade, arts and culture in what would later be ascribed as the Puneri culture, from the times of the Peshwas.
In those times the neighbouring metropolis of Mumbai was still an amalgamation of islands reclaimed from the sea and its dockyard was yet to become the thriving trade center that it would become in the following century. It would take a couple of days via horse drawn carts to traverse the hills and forests of the western Ghats past the forts to reach the islands of Mumbai.

It was Pune and not Mumbai that was the power center from where the Peshwas and the Maratha’s ruled.  The British loved its ‘almost European’ weather which was a great relief from the humidity of the sea shores of Mumbai’s islands. They set their base in the cantonment area in Pune.   Up until the 1980’s one could spot raspberry trees perhaps brought in from England and planted and nurtured by the memsahibs who lived in and around what is the 509 - Airforce area in today's Pune.
In the early 1900s, Pune was a Marathi heartland with a minority population of Iranis, Parsis and Gujaratis who migrated to set up small businesses in the city.  By the middle of the century, after India’s independence it became the hub of automobile manufacturing industries.  The TELCO now known as Tata Motors set up its automobile manufacturing plant and gave rise to many other ancillary auto industries. It was not until the late nineties and early 2000’s that the information technology industry discovered the potential in Pune and set up shops housing the back-office operations and software development of companies based out of the west.
Until then Marathi was the predominantly spoken language in Pune. Hindi, arguably the national language of India was still a foreign language to many Punekars.
Despite the influx of migrants into the newer areas of Pune, there are some neighbourhoods that still retain the Maharashtrian and old Pune charm.  The Peth’s and Wada’s of Pune are a reminder of a good times when this place thrived and which held its own identity and nurtured its own culture. They had their own distinct style in architecture, music, dance, theatre, performing arts and that mouth watering, subtly flavored distinct Maharashtrian cuisine. 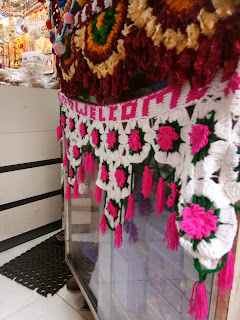 For atleast the last three generations if not more, Tulshi baug, in old Pune has been a paradise for female shoppers of all ages and times. Unlike now when you will need to park your car somewhere far away in available parking spaces and take an autorickshaw that will take you to the periphery of Tulshibaug, you could walk it up to visit the famous Dagdu Sheth Ganpati temple and then meander into the by-lanes of Tulshibaug to shop for your trinkets, kitchen accessories,  wool to knit the next sweater for the nippy Pune winters or to weave a delicate crochet that transformed into ornate table cloths and wall hangings, much of which unleashed the creativity of the housewives of a generation gone by. 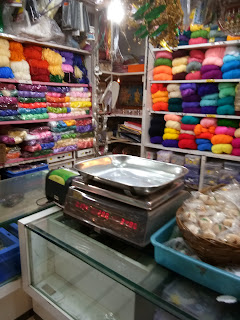 In Tulshibaug nothing much has changed in all these years.  As you alight the autorickshaw at any of the approach roads to Tulshibaug and enter the narrow alleyways you will be bombarded into the same small shops that sell everything from trinkets, beads, woolen material, knitting needles, traditional woven sarees to modern dress materials.  The trends and fashion keep changing and coming back.  But the bric a brac in Tulshi baug caters to all the variety and times and therefore remains evergreen.
It is a bargaining haven and you will be pleased to have struck a deal for something that could cost you a bomb elsewhere in an upmarket boutique.  Only to discover the next shop offering you a bigger discount on the same earring or dress material that you bargained and bought a while ago.  On the road side hawkers set up their shops of freshly harvested vegetables from the nearby villages. Although the villages have now moved far away, with all that advent of steel and glass structures that house the offices of information technology development centers and back office shops of the world. They were the erstwhile villages and farm lands that grew vegetables and reared the cattle and poultry to cater to Pune city’s population. 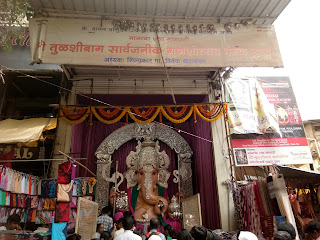 It is early afternoon and somewhere amidst the chaos and the crowds, rings the bells of Tulshi baug Ganpati.  Shoppers and hawkers suspend their activity and congregate towards the Tulshi baug Ganpati.  Situated right in the middle of the crowded shopping area is the Tulshi Baug Ganpati, one among the finest gems in Pune’s historical treasures.  Tulshi Baug Ganpati has been in existence long before Lokmanya Gangadhar Tilak, made the festival of Ganpati a public festival, to rally people to fight for social causes.  Established by the local traders in 1901, it is a display of faith within diversity among the Maharashtrian, Marwari, Gujarati, Muslim and Parsi traders of Tulshi Baug.  The idol is an imposing 15 feet in height, made of fiber glass and is on display throughout the year and not just during the eleven-day Ganeshotsav when all important neighbourhoods garner resources and manpower to erect their own pandal and install an idol that is a show of wealth, prosperity and solidarity of the neighbourhood.
In Tulshi Baug every year a new idol is sculpted by the renowned sculptor D S Khataokar.
Khataokar has been responsible for sculpting as well as decorating the Tulshi Baug Ganesh idol for more than a couple of decades now.


Pious devotees and passersby  take turns to hold the brass lamp and circumambulate the lamp for a few minutes as a part of the ‘Arati ritual’ before handing over to the next person. It is a ten-minute ritual in which Traders, hawkers and the passersby alike, stop-by and participate.
An ostentatious display of about 80 kilograms of silver along with fruit and flower garlands that are refreshed every day, the Tulshibaug Ganpati stands in a small 20 feet by 20 feet space in a crowded and busy marketplace as a pillar of prosperity for its inhabitants and visitors alike.
Around the corner is the famous Ganpati temple built by Dagdu Sheth Halwai, a local trader that has celebrated its 125th year of establishment. About 40 kilograms of gold ornaments adorn two idols of elephant god and are insured for 10 million (one crore) rupees.
Despite being situated in a maze which you can only reach through narrow alleyways, its construction is so minimalistic that you can view the idol from the main road as you pass by the temple on Laxmi road, the main thoroughfare surrounding the Dagdu Sheth Ganpati Mandir.
Legend has it that Dagdu Sheth Gadve a trader who migrated to Pune in the 1800’s had set up a sweets shop (and hence the surname Halwai) in this place.  Bad times fell upon him and he lost his son to a plague epidemic and went into deep depression. This in turn led to a downfall in his business.  His spiritual mentor advised him to build a temple for Lord Ganesh to overcome the bad times.
Apparently after he built the temple, his fortunes turned and the entire place attracted wealth and prosperity for him as well as the other traders around the area. It was here that the idea of celebrating public Ganesh festival struck Lokmanya Bal Gangadhar Tilak. It proved to be an epoch-making event in Indian history as Ganeshotsav’s in the early 1900’s slowly rallied support against the British and culminated in the freedom movement leading to India’s independence from the British rule.
Dagdu Sheth Ganpati Mandir trust is the richest trust in the state of Maharashtra and is known for the many celebrities who flock the temple during the annual eleven-day Ganeshotsav.
The vibes of the Pune of yester years is strong and vibrant around these places, and is a stark contrast to the sprawling concrete jungle of its more cosmopolitan suburbs.  A visit to Pune’s Peth areas is not complete without visiting an ‘Amruttulya’ outlet. Translated in English it could mean ‘Comparable to Nectar’, it is a great hit among those who have that cultivated taste for ‘Chaha’ the Puneri way. 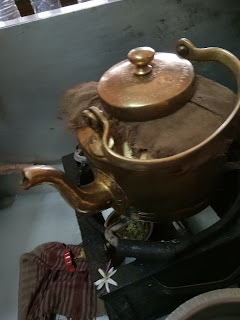 At an Amruttulya outlet tea is not brewed but boiled. Buffalo’s milk, water, sugar, crushed ginger and cardamom along with tea leaves are boiled and continuously stirred in a brass vessel. The older the brass vessel, the more distinct is the flavor of the tea boiled from it.
Often situated as a corner shop in busy intersections of crowded marketplaces, an Amruttulya outlet is a small hole in the wall with a corner that serves as the kitchen.  A shining brass kettle perched up a kerosene stove always has some tea boiling in it with crushed ginger, cardamom, tea leaves, milk and sugar.  It is poured out in a cup and a bashi (saucer) and served to the customer.  A true Puneri way of having your tea is to pour out hot tea from the cup, into the saucer, watch it cool and noisily sip it from the saucer. Noisier the better.
When at an Amruttulya outlet in Pune, do not judge someone’s etiquette by how their sip their ‘Chaha’. For the ‘Chaha’ is best sipped from the Bashi and not from cup. 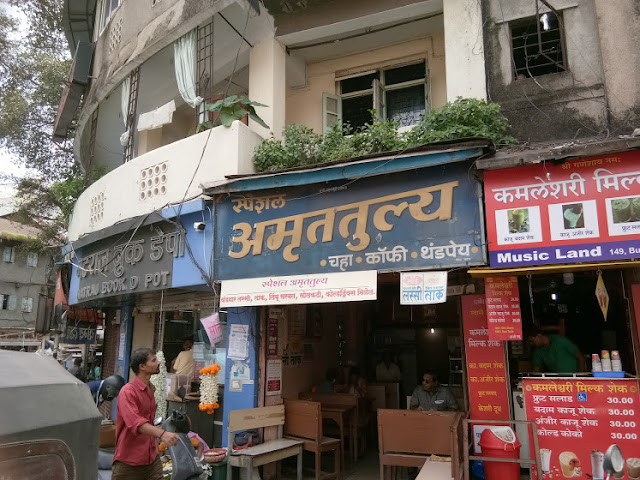 A middle-aged man dressed in an impeccable white kurta, pyjama and a white cotton Gandhi cap, after some routine haggling buys a bunch of lemon grass and ginger wrapped in a newspaper for ten rupees from the old woman clad in a nine yards saree who has set up her wares by to road side 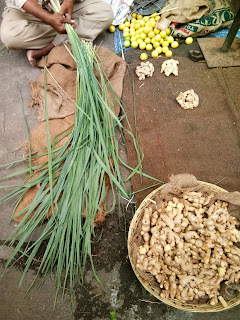 outside the Amruttulya outlet. Like in most Maharashtrian households, his day would begin with a Gavati Chaha - strong tea, boiled and strongly flavoured with cuttings of lemon grass and crushed ginger along with a bowlful of Kanda poha seasoned with freshly grated coconut and finely chopped coriander leaves while reading the ‘Sakal’ newspaper.   Somewhere in the background Pune’s own Bhimsen Joshi would croon away a Vithal Bhajan that would set the atmosphere just right to begin yet another day in one of the few waadas left in old Pune.

- April 26, 2019
Email ThisBlogThis!Share to TwitterShare to FacebookShare to Pinterest