Life on the slow track - Appam and Stew aboard NH49

The grey overcast sky from the early morning has given way and with the advent of sunshine, the day looks bright and clear.  It is humid but not hot at this time of the day.
When on a road trip it is best to go with your instinct and eat at places that you have never heard of before. 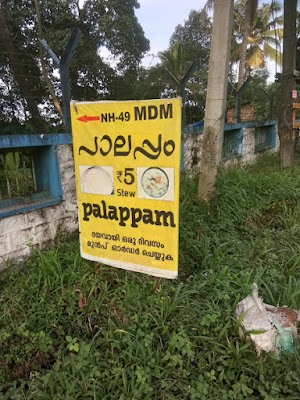 Aboard the NH49, is this mid-sized bill board hanging out by the road side which says ‘MDM … stew and palappam Rs. 5.’

As you slow down, you see a small shop on the opposite side of the road that is trying hard to cater to a cross section of customers by advertising chinees (sic), north Indian, South Indian snacks.

However, at that time in the morning, the man behind the oven is busy preparing the dough for the Malabar parotta (as different as chalk and cheese in genre, species and characteristics from the north Indian understanding of paratha).

All they have available at that time of the day is Appam and stew unless you are prepared to wait for about twenty minutes, says a woman’s voice from the kitchen.

A slightly wobbly yellow plastic table surrounded by blue plastic chairs does not make for a great ambience, but the not so busy NH-49 cutting across the coconut groves and the fresh rays of early morning sunlight piercing through the dense greenery on the opposite side of the road is soothing for the eyes. Besides it is a good place to stretch your legs, breathe some cool fresh air before the day gets humid and have a leisurely breakfast.
The lady lays out a lemony yellow plastic plate and serves a fluffy white appam with bare hands. Along comes a hot bowl of stew and the fragrance of freshly culled out coconut milk spiced up with cloves, cinnamon and cardamom ensures you have made the right stop at the right time.  The spotlessly white appam is soft in the middle, which comes from mixing the dough with freshly fermented coconut milk.

There are some dishes that cannot be mass manufactured in the restaurants with heavy foot fall.  This is one of them,

Served fresh and hot they taste as authentic as they can and come with what is called the ‘homely touch’. 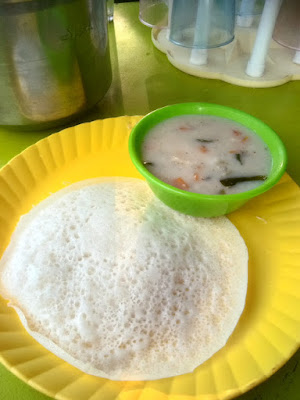 Light on the palate, slightly sweetened in taste by the coconut milk and mildly spiced up, vegetable stew is an authentic local dish of the Malabar coast line.

‘Stew’ as the name of the recipe was perhaps was an inheritance from the British, who were familiar with the other stewed versions like the apple stew, lamb and lentil stew from Europe.

The localized version is the ‘Ishtu’ as it is called by the locals. Its ingredients and recipe are certainly as local as it can get.  Cloves, cardamom, cashew and seasonal vegetables or mutton pieces slowly stewed (not cooked) in freshly extracted coconut milk. It was probably christened as the Malabar stew by the British almost a century ago.  The locals have adapted the nomenclature and pronounce it ‘ishtu’. 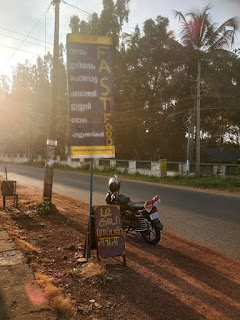 When you look around and search for the origins of this recipe, you can trace it down among the Srilankans and Tamils settled in the coastal district in Tuticorin and Nagapattinam.   In its Srilankan Sinhalese version the stew is known as ‘Sodhi’. This dish perhaps   originated from Sri lanka which has a similar terrain and flora like the Malabar coast. A vast coast line, abundant coconut trees, spices and locally grown vegetables and livestock evolved and mutated into a recipe that was adapted by the locals and the colonial rulers alike.

In its Malabar version, it is best served with fluffy appam’s that are prepared with fermented lentils and rice dough mixed with tender coconut water and coconut milk extract. Best served hot and eaten in a traditional Kerala home or at a non-descript road side eatery along the national highways dotted across the Malabar coast.

- April 12, 2019
Email ThisBlogThis!Share to TwitterShare to FacebookShare to Pinterest