No landscape of small town India is complete without a local tea shop where one can taste and smell the pulse of the local town and its happenings as well as feel the ripples of national events throbbing through its veins. 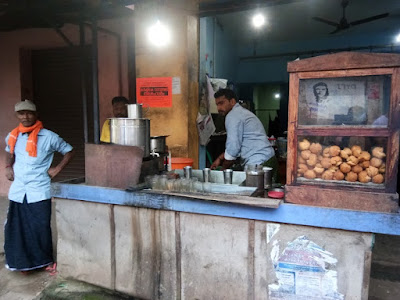 It has been more than an hour since Shaji’s tea boiler has been at work at his road side tea shop. A dimly lit tube light is at work since bright sunlight is still an hour away.

Freshly rinsed glass tumblers have been laid out on the counter.  In some time, slowly but steadily a stream of local customers would arrive at his tea shop for their morning cuppa.

Copies of the local newspaper, fresh with yesterday’s regional news have just been delivered by the newspaper boy. 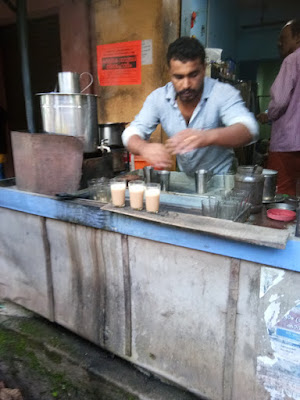 The boiler is steaming with water and the smell of boiled tea leaves is wafting across the road.  On the transparent glass jar, Shaji fills out freshly baked banana cake that look hard from the outside but are soft and fresh when you bite into them.

A slightly unripe banana stalk threatening to ripen anytime during the day is hung on a coir rope right at the entrance of the tea shop, at a height just right for the customer to stretch and reach out his pick.

At the corner of the entrance to the shop is a coir rope hanging loose and at an arm’s length distance.  It has been set aflame with fire from the kerosene stove. When the flame has been doused, it burns slowly but steadily giving out a faint glow of fire and smoke like an incense stick sans the fragrance. As the day progresses, it would slowly burn away, but not before lighting up a hundred cigarettes for the customers.

In Kerala the tea leaves brewed in the tea boiler pan are never boiled along with the milk. They are added separately.  As the tea leaves are set to boil in a boiler fired by a noisy kerosene stove, another huge stainless-steel vessel is keeping the boiled milk warm.  As the regular customer arrives, Shaji instinctively knows his preferences. Black tea with sugar for Unni chettan, tea without sugar but with milk for colonel uncle, and equal proportions of milk and tea mixed with generous spoonfuls of sugar for Rafiq bhai.

The occasional passerby who stops at his shop would need to specify his preferences before Shaji can mix and match and dole out the hot steaming glass out for him or her.  When you do not specify your preferences, you get a cup of tea that has seventy percent strong boiled tea, twenty percent milk, half a teaspoon of sugar and about ten percent froth that has been deftly frothed up by pouring out the beverage from a height of two feet and above into another glass cup placed at the tea counter.  This action serves many purposes like ensuring the mixing of tea, milk and sugar, bringing the beverage to the right temperature for the customer to slowly and noisily sip the ten percent froth generated  on top of the glass cup and giving the tea boy his much needed exercise to build up his biceps and sometimes even a six pack.

The regulars arrive one by one.  Initially there is an eerie silence around the shop. No one is talking. Perhaps because they are grumpy or perhaps because everyone is a regular and Shaji, like google knows their preferences based on previous tea drinking history.

They help themselves to a banana from the stalk or a piece of the banana cake from the glass jar, pick up a cigarette and light it at the burning end of the coir rope before picking up the steaming hot cup of tea bubbling with froth that has been laid out for them.

The morning cuppa is incomplete without that vital ingredient, the local newspaper. 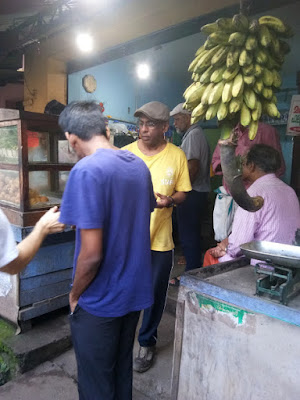 This morning the headlines is all about local member of parliament’s cheeky remarks on flood relief operation and the Chief minister retort on the MPs arm chair contribution while holidaying in a foreign country during the flood relief operations.  The other half of the newspaper headlines is about a shoddy rescue operation during the flood of a women’s hostel in the nearby town.

Opinions about who is right and who is wrong are divided along political affiliations. As the regular customers slowly gather and sip their cup of tea, the discussion gets louder and fierce.

A passerby, un-initiated into local ways of political analysis could get utterly bewildered by the happenings and would wonder if she should dial the police as the situation could potentially turn violent. But Shaji is unperturbed by the goings on. This is business as usual in his shop. The argumentative Malayali’s hold on to their opinion and stubbornly stick to their point of view. They take a dig at each other’s political parties, agree to disagree, finish their morning cup of tea and go about their daily business.

Surprisingly a cup of tea in the tea shops in the land of spices is devoid of any freshly added spice like ginger, cinnamon or cardamom.  It is the local newspaper that adds all the spice. The otherwise strong cup of tea, is spiced up by politics and makes for an intellectually enriching, interesting and occasionally explosive conversation not just at the start of the day, but throughout.

As the day light picks up, the traffic gets denser along the NH49.  Local buses, expensive cars, beastly motorbikes and creaky autorickshaws equally compete for space and speed on this two-lane national highway.
To be continued - Appam and Stew aboard NH49

- March 29, 2019
Email ThisBlogThis!Share to TwitterShare to FacebookShare to Pinterest