In the good old days when travelling by train was the norm and air travel was the privilege of the super rich, train travel was a thrilling adventure in itself.

Before you boarded a train, clutching your reserved ticket it was only natural to check on who your co- passengers would be, in the railway chart put up at the entrance to the coach.

Their name, surname, age and gender that would be printed on the chart, in English on one end of the coach and Hindi on the other, gave out pretty much a rough outline of your co-passenger’s lineage and other vital credentials. If there was any cause to worry, the Travel ticket examiner ,(TTE) always dressed in white shirt, black trousers and a jet black blazer unmindful of the weather conditions could always help you out. Sometimes for a little extra money. 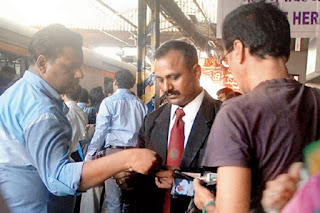 Travel ticket Examiner (TTE) always came across as a stern looking man who could make or break your train journey.  Macho men who otherwise had an authoritarian command over the wife and the children or sometimes a much larger brood, begged , bowed and talked in whispered tones and treated the TTE with utmost respect and reverence.

You were mentally conditioned to assume that like taxi drivers, auto drivers, bus drivers and conductors a TTE would always be a man.

Was pleasantly surprised seeing a woman TTE, aboard Kanyakumari express travelling from Trivandrum to Bangalore. 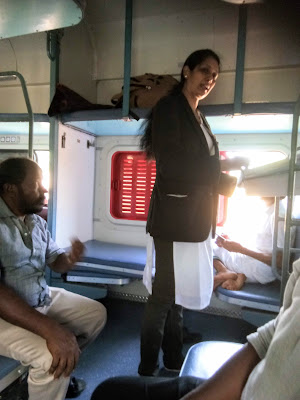 A well dressed, young, fit and surprisingly friendly TTE at that.

In the days when the railway charts and physical tickets have been done away with, all you need to do is to show your government issued id proof and your TTE legitimizes your travel.
And that is exactly what I did.  I pulled up my Aadhar card and handed over. But I was still struggling to open the IRCTC app on my mobile phone to show my ticket, due to a weak signal.

Meanwhile she politely returned my Aadhar card and nodded her head and marked me on her chart.  She checked my co-passengers one by one and then looked at me the second time.

Are you travelling on Senior citizens concession’ she asked.
‘Of course not’, I replied as I once again pulled out my mobile phone to produce the evidence that  I had indeed paid the full fare .

She mildly dismissed my protest, but moved on nevertheless to the next carriage.

It was a strange question.

I was curious what triggered it off.

Truth be told, I was slightly hurt and wondered if  I may have started looking like a 60 year old.

Oh Well, a few strands of grey hair here and there does not make you sixty years old.

Nor does it entitle you to a senior citizen concession , does it ?

I could not dismiss the thought and her strange question for a long time.

About 20 minutes later she re appeared and offered her explanation.

When you book your tickets online on ‘irctc app’, if you are a female passenger you have a choice of indicating your berth preferences. ( Female travelers could be pregnant, could be menstruating at that time , could be travelling with young children or infants or even worse they may not have waxed their legs ).

If you ask for it, the built -in algorithm then allocates you the lower berth as long as it is available.  The same algorithm is built in for senior citizens   irrespective of their gender.  ( No wonder passengers do not run around the all powerful TTE much these days to get their berth allotment changed)

The indication mark on the TTE’s computer generated chart for preferential berth allotment is the same for women travelers as well as senior citizens.  It was something the TTE aboard Kanyakumari express, figured out that day.

She was sweet enough to come and clarify it to me after she had finished examining all the tickets in the compartment.

It is a woman to woman thing you see….

Thank god for that magnanimous act of hers.  It restored my self esteem .  In those twenty minutes I almost relived the pangs of an induced mid life crisis.   I had almost made up my mind to go back and color my hair black if not brown or  a shade of  blonde. I also contemplated exiting the 'growing grey gracefully (GGG) group in facebook.

Such is the fragile nature of the feminine kind.

Would a male TTE have bothered to come back, explain and clarify ?

Thank god for female TTE’s.  May their Tribe increase

P.P,P.S : Since I was not pregnant, was not responsible to care for any infants, was not  menstruating and had had my legs waxed recently, I offered my lower berth to a tall, dark and not exactly very handsome man in exchange of the side upper berth because he was struggling to fit in his tall frame in that ‘side upper berth’  which Indian railways specifically designed for the petite women who dare to climb berths.  More about the glory of side upper berths in another post.

- March 26, 2019
Email ThisBlogThis!Share to TwitterShare to FacebookShare to Pinterest