31 ways to make a living : The Sambrani Man 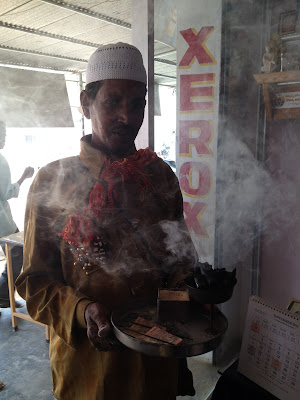 He will stop at the tea shop next before he heads to the Xerox and stationery shop.
This is the Sambrani man's routine everyday except on Fridays when he takes his weekly off. His customers are the shopkeepers who donate a few rupees into this bowl as a matter of routine.

Sambrani in English is called the benzoin Resin which is obtained from the bark of a tree. It is then dried, powdered and sold either in powder form or as blocks.

When powdered and put into charcoal fire it gives out a dense smoke that wafts through with a special fragrance that can freshen up the atmosphere of an otherwise dull and dingy place.

In the crowded market places of many small towns, the Sambrani man's ritual is taken for granted and his income from his loyal customers keeps him stuck to his occupation.

One of them has been featured on youtube.
Click here to watch him in action
With the advent of super markets and the annihilation of small time corner shops his is an occupation that may well be on the brink of becoming extinct.

P.S : If you are familiar with Sambrani, and this post has evoked some sort of nostalgia in you, then over this weekend make sure to take a leisurely oil bath, put on some divine music, dry your hair through a dense smoke of sambrani, before going overboard on your Rasam -rice and curd rice. When you wake up after your siesta that afternoon you will know what paradise feels like.


This is a part of write 31 days - a writing challenge every october every day for which i think I may have signed up in drunken stupor.   Neverthless i am committed to keep up my promise (atleast till now ) .

- October 01, 2015
Email ThisBlogThis!Share to TwitterShare to FacebookShare to Pinterest