It is the day of Ayudha Pooja.
I take my car to the temple for the annual worship of my vehicle that enables me to drive to work and make my living.
A coconut, four lemons, a flower garland and two hundred rupee notes is what it takes for me to broker with goddesses of wealth, knowledge and power ( Lakshmi, Saraswati and Durga ) to express my gratitude and also throw in my wishes for the future through the priest who has been doing this for my car for five years now.

As the priest goes through this ritual children from the nearby huts where construction workers live swarm up around my car. The tractors, that,  later in the day pick up garbage from the streets do their early morning rounds when they arrive to pick up the workers to take them to building construction sites for work.  In the afternoons when their parents are at work the children loiter around the temple. Some of them go to the government school run by the municipality more often than not for the free afternoon meals offered there.

Today however is a special day. It is a holiday at the school on account of festivities and therefore there is a lot of activity at the temple.The boys are here to pick up the pieces of the sweet coconut that the priest would break after he performs the Pooja for the cars.

Many people would come to the temple to get their cars, motorcycles, scooters, bicycles and hand carts blessed by the goddess on this auspicious day.  Some would even choose to buy their vehicle today.

The priest applies kumkum to my steering wheel and goes around with the incense stick incensing the insides and outsides of my car while the two tall boys try and have quick glance on the insides of my car. I get a little uneasy and keep a close watch on them.
My head tells me to be cautious and to shoo them away.
My heart tells me they could mean no harm, so I should let them be.
Just a curious bunch of boys trying to look inside a car.

'New car' says one of them to the other.
'Does not look like a new one' retorts the other in Tamil presumably their native language.

Suspecting I do not understand Tamil the older / bolder one asks me in English "new car madam ?"

To encourage his English I tell him in English that it is not new but 5 years old.
He translates to the other boy and reconfirms to him that the car isn't new. 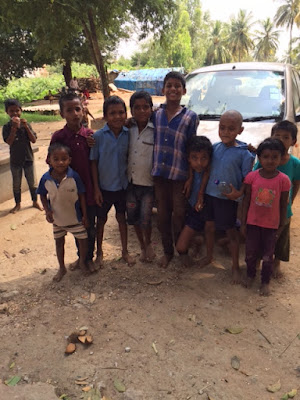 How much ? He asks.
What ? I ask, a little perplexed with the way the conversation was getting slightly intrusive.

How-much-money -car? He puts together the sentence.

In that typical boisterous boyish way he tells the other boy that the car costs 5 crores, in Tamil.

Oh !!  he exclaims to acknowledge that he stands corrected.

I instinctively know that in his mind he is calculating how much 5 lacs would be.

I also know that he has decided he would buy one when he gets there.

I am certain that when he gets there it will bring him an immense sense of pride and achievement atleast for a while.

Well,,, to each their own dreams wishes  and ambitions !!!.

This post was written for Write tribe's # Monday musings...
- October 24, 2015
Email ThisBlogThis!Share to TwitterShare to FacebookShare to Pinterest