Starting at the foot steps at the famous big bull temple in Basavanagudi the Basavanagudi Darshan Walk was a walk into the almost 500 year old history of the city that has now burst and expanded way beyond it seams for what was conceived by its then Cheftain Kempe Gowda.

With four clock towers connected by a mud wall that ran across marking the city boundaries legend had it that if the city expanded beyond the boundaries great misfortune will fall upon the settlement.

Bangalore city - dubbed the silicon valley of the east ironically seems to have been blessed with fortune much to the disdain of the ancient legend. But Mansoor Ali our Tour guide conducting the walk thinks otherwise. Perhaps the city's mounting garbage problems, nearly  poisoned water bodies the maddening urban chaos are warning signals for the misfortune that awaits the city in the no so distant future, he says.

As a relatively new immigrant into this city who has made it home for the past five years, I have taken many an American across to the old city of Bangalore … particularly to Basavanagudi  for  a quick dose of 'Indian Heritage' for the time strapped visitor to India.

But the walk with Mansoor Ali of Bengaluru by foot  was very different and enlightening. Do not go by his name, he could put a pious Hindu to shame with his indepth knowledge of Hindu mythology and the familiar ease with which  he walks you across the ancient temple town of Basavanagudi.

An architect by profession, and a native resident of Basavanagudi,  Mansoor has not just the knowledge but the experience of having grown up in times when the city around him transformed  unrecognizably into the arguably ugly monster that it has turned out to be. 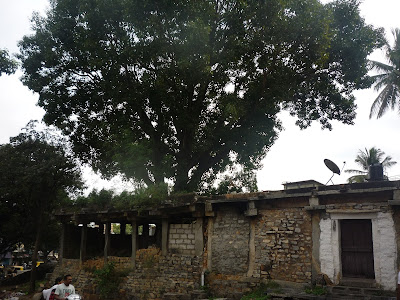 A keen insight into the temples of Basavanagudi combined with a lot of history and trivia thrown in made it nice heritage walk.  Visiting the cave temple of Gavipuram and a sneak peek into the 450 year old house of the temple priests who live besides the temple was when the true experience of a heritage walk sinked into us.  For, to experience the heritage one needs to see how its original inhabitants live  today.  Very little of it is still preserved and thanks to a very resourceful Mansoor we just walked into the house of the priest and caught him unguarded resting bare chested in his cot when his wife emerged from the kitchen with a wet towel draped over her hair.  It was a cute moment when she coyly  hesitated to get photographed with us saying she was not dressed for the occasion.

Ah .. women the world over are the same .. remarked my fellow Canadian walker who was thoroughly enjoying his insights of a 100% genuine local experience. 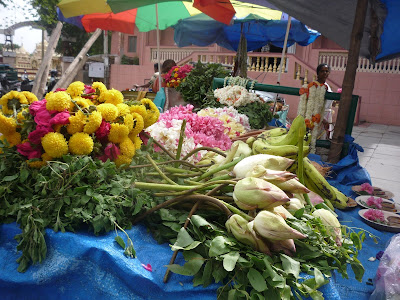 - October 03, 2015
Email ThisBlogThis!Share to TwitterShare to FacebookShare to Pinterest 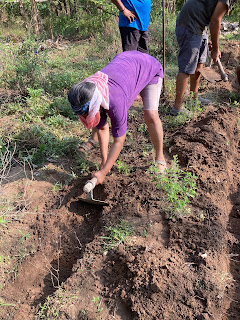