Where the streets and homes are free from harassment and humiliation,
Where the woman’s body is not the punching pad for repressed frustration,

Where access to equal opportunity is her birth right,
Where she does not have to strive twice as hard just to prove her might

Where she is not killed even before she is born,
Where she does not go on living wishing she was gone,

Where her identity is more than being a daughter, sister, mother or a wife,
Where in true spirit exists the freedom of choice,

Where she is free to decide what she wears and what she does not,
Where she can choose to marry or not,

Where she is not judged when she wants to opt out,
Where she can be fearless when she needs to steps out,

Where she is not treated differently based on whether her skin is fair or black,
Where she does not care if she is called a skinny jack or a potato sack.

Where she does not have to hang her head in shame and cry,
When her bundle of joy does not turn out to be a boy.
Where tears and pain are not misunderstood to be the sign of womanly weakness,
Nor are aggression and ambition regarded as the sign of manly strength.

Where the rules laid out by patriarchal powers are not artificially adjusted to accommodate her,

Where the narrow minded norms of Victorian era morality has not lost it way
Into the double standards of an outdated social order,

Where nature’s bounty is available free for all who toil and in plenty,
Where age old traditional womanly wisdom is not hijacked, branded in packs,
patented and sold by money minded sharks

Where she is not manipulated in the corridors of power to play the role of a dummy,
Where the measure of equality is not misunderstood to mean the pursuit of money,

Where logic and evidence do not form the sole pillars of exercising sound judgement,
Where the power of feminine instinct is not subjected to ridicule and belittlement,

Where healthy competition strives to balance itself with mutual co-operation,
Where collectivistic determination takes precedence over individualistic ambition,

Where the world is led forward by broad minded free thinkers,
Who see in every man, woman, transgender, animals, birds and the trees …
The common sense in promoting inclusion,  mutual respect and interdependence.

Into that heaven of peaceful co-existence, Oh mother, let my countrymen awake.

Inspired by Rabindranath Tagore's poem 'Where the World is without fear ...and the head is held high ... '

- September 07, 2015
Email ThisBlogThis!Share to TwitterShare to FacebookShare to Pinterest 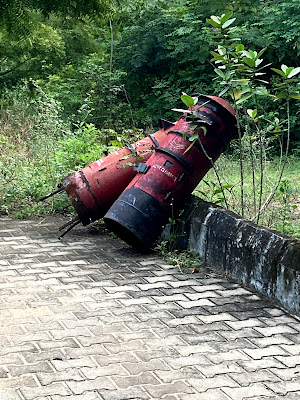