MADRASI AND THE FILTER KAAPI ....

The Madrasi that I am, needless to say, I grew up in a household of coffee drinkers.
As far as Coffee drinking goes I am the black sheep in the family. Am not much of a coffee drinker.
I can savour a cup of coffee just as obligingly as one drinks a potion of ‘kashayam’ or ’castor oil’.

Many a times Paatti ( grandmother)  has expessed her deep concern as to what a hopeless daughter –in-law I might turn out to be, if I did not know how to serve a satisfying tumbler of Filter coffee to my in-laws. ( Thankfully I have’nt been subjected to that ordeal ).

In a Madrasi household , Coffee is not a just a beverage , it is a way of life.

The’ degree kaapi’, needs to be piping hot, made out of fresh milk, freshly ground coffee seeds with the right amount of chicory powder at 5.30 am in the morning and then at regular intervals through the day. In the morning just as the milkman delivers the milk and the local temple blares out MS and her signature ‘venkatesha suprabhatam’ much to the irritation of the youngsters who watched a late night movie and have just managed sleep a couple of hours ago, the decoction is brewed in a coffee filter. 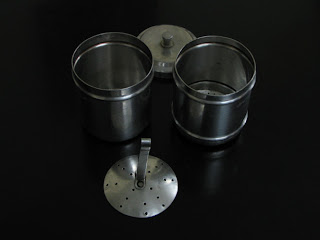 The aroma of freshly brewed coffee lingers around the house around the same time as the bird’s screech their lungs out and the orange colour of dawn breaks out from the grey sky and announces the arrival of yet another day.
The ‘filter kaapi’ served in a steel tumbler placed inside a ‘davara’ held in one hand is best
savoured with 'The Hindu’ newspaper on the other . 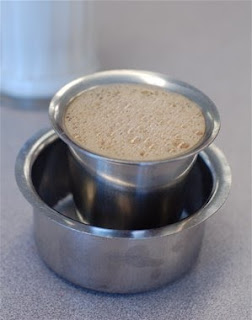 The aroma, taste and quality of filter ‘degree’ coffee remains undiluted and unchanged in its standards in most ‘Madrasi' households to this day.

It was therefore with a slight trepidation that I took my Madrasi parents to a Starbucks café .

With the knowledge I do have about the exacting standards of coffee they are used to, I ordered for them expresso coffee, that would be the closest possible resemblance to the one and only form of coffee that they recognize and acknowledge as ‘kaapi’.
When the orders were ready and called out at the counter, I went and fetched the tray . We settled into the couch as I poured out the coffee, some milk and reached out for some sugar and stirrer from across the couch at the self service counter. I prepared and handed out the coffee to them and settled down to sip my vanilla flavoured iced tea .
From across the couch my father looked at the board over the self service counter that listed the menu of a 30 different varieties of coffee being served and he asked me which was the one they were having.
'Esspresso – hot' I replied.
He digressed into a pensive mood for a moment and did some mental maths.
He said he did’nt quite get it. ‘If you have to fetch your own decoction from the counter, pour a few teaspoonfuls of cold milk and add the sugar on your own, then what are you paying him all the money for?

Which fool comes here to have coffee when Sri Krishna Vilas or Madras café  would serve you a much better concoction, piping hot and that too within minutes.

Is this just bad customer service or is there more to it?

Eh Madrasi ... Part 5 to be continued.
If this post in itself doesn ot make much sense to you

This post is written for WRITE TRIBE's wednesday prompt  ... I,  ME & MYSELF
- October 01, 2014
Email ThisBlogThis!Share to TwitterShare to FacebookShare to Pinterest