It is a Sunday evening I am walking  across this stretch of the road in my neighbourhood, where a few construction workers have pitched their tents.


There was music crooning out of the radio from a nearby tent, naked children running across the tents, screaming and playing.


But that is not what stops me there. It is the subtle smell of the freshly prepared chapatti.  Food hardly smells good these days, and when it does it does whip up your appetite.


It is dusk and there is very little natural light. But I do not want the moment to pass. My standing and staring is noticed by the lady. I ask her if I could click a photograph. The lady does’nt understand my hindi and I do not understand her kannada or possibly telugu. A young man from the neighbouring tent volunteers as my translator.  I tell him why as someone who is seeing a ‘wood fired’ chulha after a long time, I want to click a photograph and possibly take a video.
The lady is a little embarrassed and gestures to me saying she is so badly dressed for a photograph and her hair is not combed .  I tell her it is ok and explain that it is essence of how she cooks that intrigues me.  Neither the translator nor she have understood or appreciate my reasoning, but they are more than willing for me to take a photograph or two.

Here is what I captured this  evening.
Wood fired … Indian Bread … anyone. 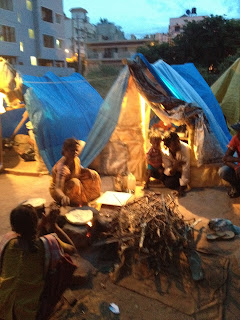 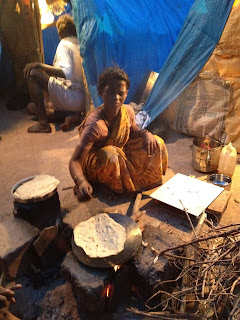 ‘Food used to be much tastier in our days’, I have heard my grandfather say .
He would rant about the taste of the spinach that grew in their backyard, the drumsticks that grew in plenty in the neighbours  garden , the mangoes that threw in a bumper harvest  every other year in their orchards.

The list was endless especially when he had a captive audience to listen, he would go into this trip of nostalgia endlessly for hours.

As I grow older, I see myself  experiencing  this more often not just out of to nostalgia about the past, but for the fact that food DID taste much better in the days when street side vada pav wasn’t replaced by more hygenic Mcdonald’s burger and water drawn from the well at home was just as safe as the bottled mineral water .
When mass cultivated branded vegetables were not packed in plastic packets and sold in air conditioned super markets  but were sold by the old woman who procured it fresh from the local market at 4.00 am that morning.

When pasteurized milk with sell-by dates was not picked up from super markets or delivered in plastic packets, but along with the milkman came the calf and cow to the gate and the udders were milked right in front of the ladies of the house, lest should that crook of a milkman add water into the milk.

Coming to think of it, Tea, coffee, milk, ghee and sweets tasted really really good.  It does'nt seem very long ago. It was the era before lactose intolerance was unknown and sugar free substitutes were unnecessary.