Its the time to Mango

Its the Time to Mango...


It has been a bumper season for mangoes, atleast from what I get to see in Salem and Bangalore . They say the best of mangoes harvest when the summer has been scorchingly hot.
Driving across the NH7 from Bangalore to Salem, is a sad experience of seeing trees cut and uprooted for the construction of the six lane highway. Such is the price we pay for development !!!

The NH7 cuts through some mango orchards throughout Thoppur, Dharmapuri, Krishnagiri and Salem. Along the highway are numerous wayside sellers with varieties of the local mangoes selling it to the urbanized travellers looking for a good bargain and a slice of local flavor. 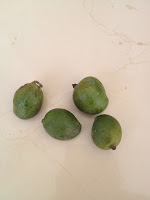 Sakkarakutty translated in English for a more appealing name is known as sugar baby. Round, small  plump and green, she scores low on the looks department in the world of mangoes.
Like they say dont judge a book by its cover, do not judge Sakkarakutty by her looks.  'Sakkarakutty’ oozes out sweetness that can put a jalebi or rasagulla to shame. Like all things beautiful she comes with her set of flaws.

With a lot of fibres and a thick seed inside, sugar baby is'nt a variety that can be served in a fine dining place.This is not for the one who is conscious of dining etiqutte. She is best relished in private. The trick is to press her in the middle and squeeze ;) the juice straight into your mouth (never mind the mess on your clothes and feet, it is worth the experience :)


﻿﻿﻿﻿﻿﻿
Imampasandu, earliest known to have breeded along the banks of Cauvery in thathachariar gardens in Srirangam near Trichy has an intriguing name. She could be a hydrid between Malgova and Banganapalli, two famous mango varieties earlier grown in Tamil Nadu and Andhra pradesh respectively.

It could be a moghul export into south india and denotes something like ‘imam’s favourite’ .  Supposed to be south india's answer the to more aromatic, tastier and 'exportable' Alphonso.

I am partial to the unsung varieties of mangoes, but that does not negate the queens among the king of fruits. Sindoora, Mallika and Alphonso are to me Katrinas , Kareenas and Aishwaryas of the mango world. Good to look at, not much by ways of flaws like fibres, or occassional sourness , they are  universally liked, presentable, well marketed particularly because they all travel well.

Alphonso ( the variety grown in regions of Konkan) is undoubtedly the top variety and goes unparalled not only for her taste but also her aroma. Worth every penny of the exorbitant price that she commands.

Sindoora and Mallika are highly presentable ( no sugar baby disasters here) , sweet and pleasant to eat. Cultivated commerically, they are available in plenty during the season all over.

Malgova : Big and green to look at, it can be mistaken for a Ripe mango.  Unlike other mangoes it does’nt colour yellow or orange. With a tinge of red to indicate its ripe form it has a unique flavour with a tangy after taste that makes it suitable to be eaten with a mix of sweetness and tanginess.

Rumani, with a very thin skin is round and juicy. Usually Rumani is best eaten as a pulp or juice with generous amounts of milk and sugar blended with the pulp, because of the tanginess that can sometimes mar the taste of the mango.  This is a variety more common to tamil nadu.  Rumani  is typically an the accompaniment after the curd rice in many parts of Tamil nadu..

The deserving  climax to the mango season comes when the market gets flooded with the Neelam variety. David Davidar dedicated his book 'the house of blue mangoes’ – to the meries of this mango that grew in courtyard of the protagonist's house. Neelam in native Tamil signifying the colour Blue.
While there is nothing blue about the Neelam variety , it is probably named so because it leaves you with the blues of the season, nostalgic memories of yet another incredible summer gone by . Neelam seldom gets exported ( that leaves it inexpensive for the locals to enjoy) . And that is because the sweetest of Neelam mangoes have a bug living at the center of the mango. 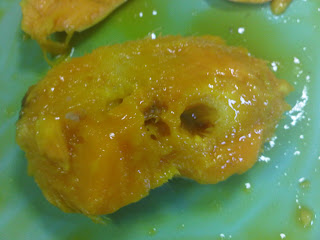 A true conossiuer of mango would hardly get put off by the bug. The bugs choose the best neelam flowers to lay their eggs. With time, the flowers ripen into fruits and the eggs into the bug. The sweeter and jucier the neelam, the more are the chances that there is a bug living inside.

Neelams are sweet and pleasant are aromatic in their own way. Eaten by itself in its ripe form or in a juice variety, commonly made into Aam ras,  they are a fitting finale to end the mango season in the southern part of india.

With some luck I plan to take off during the mango season to the north of India. Then hopefully an entire blog shall be dedicated to the north Indian varieties of mangoes.