More famously known by its abbreviated form MTR is synonymous with the garden city and it old world charms.
A 100 meters from the Lalbagh botanical park, it is certainly not the fine dining place you would take an ‘unindianized’ visitor to. 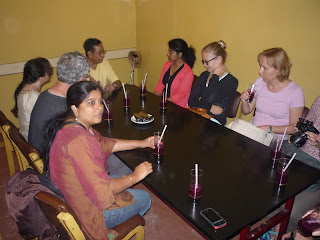 Or so I thought.

My brunch today was with a dozen or so fellow walkers from USA, Germany, France & Romania at MTR after an amazing ‘Green Heritage walk’ just across the road at the Lalbagh botanical gardens.

More about the walk in yet another blog, for the heritage and history of MTR is itself worth a blog.

There were no forks and knives, just the spoons and some paper napkins since the visiting were not used to 'hand wash'.
The fanfare served for the brunch was MTR’s signature dish – the Rava idli, a Masala Dosa and a Plain Dosa with generous helpings of ghee.

This was preceded by a Bangalore grape juice and followed by the Chandrahara a sweet from Karnataka and summed up by the south Indian filter coffee served in Real Silver tumblers. ( A privilege exclusively reserved for the Bangalore walks customers) 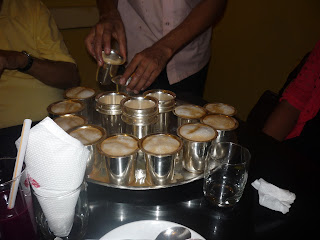 A motley mix of curious tourists, software professionals from all over the world overseeing the work get ‘Bangalored’ and a couple of new age bangaloreans like me were out discussing the prevalence of
‘ Arranged marriages’ and the relevance of ‘caste system’ trying to demystify present day India over a sumptuous Brunch at MTR.

The Bangalore around it has transformed and come a long way since MTR was established in 1935.
And yet the Mavalli Tiffin rooms in Lalbagh remain unchanged over the years.

That would not be a fair statement to make.  There are a few changes since the last time I came here over 12 years ago. The silver cutlery in which the feast was served is now replaced by the stainless steel. Apparently as the cost of the precious metal made a steep rise northwards, many pieces of the silver cutlery started disappearing for they were worth far more than the meal that was being served on them.

The traditionally dressed waiter with a red turban and dhoti has disappeared and had given way to the uniformed boys. The meal is a set meal unlike in earlier times when you expereinced a slice of traditional indian hospitality where the helpings were heaped upon until even if you helplessly protested worrying about the gastronomic overload and its after effects on your digestive system.
Over years the crowds still throng and wait outside for an average of about 30 mts on weekends and slightly lesser over weekdays to be called upon by the efficient staff for their meal of the day.
MTR takes no reservations. Online or otherwise. You book your table by presenting yourself in flesh and blood  and are given your wait time in minutes before being ushered for your standard meal of the day through a mirage of small 'Tiffin' rooms with simple granite tables and plastic chairs.
No compromises there.
What makes the meal special is possibly the wait time. For without it a long drive to the tiny, ambienceless MTR is not worth it.
The proof of the pudding is in the eating.
When you set foot into MTR,it just makes sense to set aside all western notions of high calorie food and stop worrying about hygiene concerns and healthy diet and enjoy the experience.

Calorie laden ghee ( clarified butter) is a part of every preparation and is also served as an accompaniment with brunch and lunch. 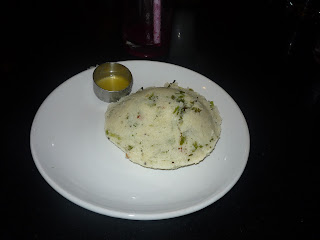 A blog on MTR is incomplete without the mention of their Rava idli. When world war II broke out, India went through its worst famine. All the rice production was exported for the soldiers of British army fighting the wars in faraway lands in  Singapore, Burma (now Myanmar) and other far east countries.
At a time when all home grown rice was getting exported, MTR invented ‘Rava idli’ a dish made of grounded wheat fermented with yogurt, and mixed with appropriate spices like coriander and cumin seeds. Richly garnished with peanuts and cashew nuts they make for a tasty breakfast substituting the traditional idly made with ground rice and lentils.

More than half a century later MTR’s readymade 'rava idli mix' is now famous with the Indian diaspora that lives way above and below the equator in colder climates where fermenting the rice and lentil batter is a time consuming and frustrating task owing to the lack of heat and sunshine.

MTR over the years retains its ambience (or the lack of it) and refuses to adapt to the more hip and flashy culture that is prevalent in the city that has grown around it. Its brand popularity and repeat customers have earned it a reputation that could have easily allowed MTR to move up the value chain in a city that is plush with new found wealth and heaps of disposable income. 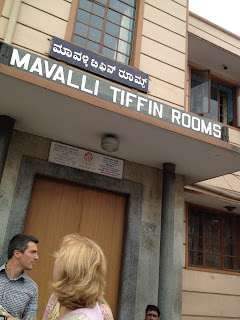 Other MTR restaurants do have presence in upmarket malls and eating joints across Bangalore. However the original Mavalli Tiffin room in Lalbagh still offers the same value for money food in the same ambience for possibly a much wider range of curious customers from all over the world who arguably cannot stop raving and ranting about the experience. 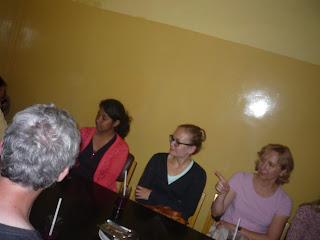 Here was a sample that expreimented eating Masala dosa without a fork and a knife. .
- August 26, 2012
Email ThisBlogThis!Share to TwitterShare to FacebookShare to Pinterest