I am not the one given to splurging and impulsive buying.
But today was an exception.
I saw this grandfather’s clock and fell in love with it.

Like Laila (Katrina Kaif) would have said in ZNMD ‘Mujhe afsos karna nahi aata’, I went back, said to myself WTH and paid for this one. 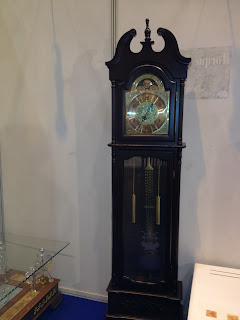 I have now begun to wonder if my lovely little cuckoo clock will feel intimidated and neglected with the arrival of this Big ben of B-102. I just realized that he will be competing with her to chime in every half hour.

Now; that was not a sceanrio I thought about when I gave in to my temptations this evening at the antique exhibition.

The cuckoo clock came into my life on a similar surge of temptation about six years ago.

I was on this solo - soul searching trip to Europe with a bunch of strangers that I never cared to befriend.  It was a  warm summer afternoon at  Munich’s central Marienplatz square where I watched the Glockenspiel – chime and dance to the tunes for the royal wedding and the ritualistic dance at the stroke of midday. 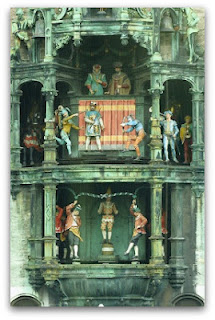 That evening  the tour took us through the meandering Rhine valley along the black forest to this quaint village called St Goar  where according to my tour guide , was the place where the original cuckoo clocks were made by families  that had the craftsmanship passed on to them generation after generation.
At the cuckoo clock shop in St. Goar  were clocks big and small, grand and understated. Each clock spoke of delicate craftsmanship and the pride and passion that goes behind creating these simple works of mechanics with such precision and beauty. 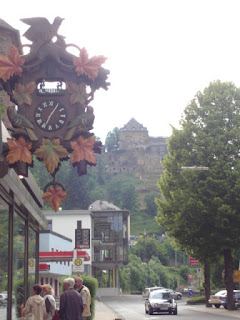 I just knew, I wanted one of them .

I am not given to splurging and impulsive buying.

But that day had to be an exception.

I think that is what I said to myself that warm summer evening at St. Goar in Rhine valley.

At 120 euros this was the cheapest cuckoo clock and the only one I could afford.  When I now think of it, it was steal. Although at that time it did burn a big hole in my pocket.

September 6th 2006. That was the day I got her.
Instinct told me she would occupy a special place in my life.

I lugged her from the Rhine valley to Normandy and then to Paris and then from Calais to Dover across the English channel and all the way to London on the coach and then in the tube and then the train all the way to the house in Croydon.
I carefully assembled her into working condition soon after my return from the Europe trip.
She chimed for a while at our Croydon house and then fell silent. To be fair I was out in India for six months and decided to pack her up since I would not be able to wind her up every week to keep her chiming.

Then we shifted houses. Considering she was not given to harsh handling (Oh-so-much-like-me), she stopped chiming when I reassmbled her at the hounslow apartment although she always showed the right time and was hung right in the middle of the entrance of the apartment.

She badly needed the mending, but so did my spirits.

I did not do anything about either of them.

Perhaps reflective of my own spirits she was never really unpacked  when we shifted houses once again, this time to Egham.
One never gives up hope. I lugged her back to India when I decided to relocate to Bangalore. I made a special trip just for her and made sure I checked her in as a hand baggage. She was too delicate to be handled in a check in baggage even if it was marked fragile.

She got the much needed mending at an upmarket cuckoo clock specialist in Indira nagar in Bangalore.
Once again, reflective of my own spirits, she started chiming again and has been doing a great job adorning the center stage of my drawing room. The Cuckoo chimes reverberate all over the house.
Her cuckoo chimes have given me company through many a sleepless nights in the past and also give me company when I sleep  like a baby, only to faintly hear her chime away a seven or perhaps even an eight in the mornings, starkly reminding me to get out of bed , strut my butt and begin the day.
For the last two and a half years she has kept me company chiming happily and  unfailingly.

My darling cuckoo clock, the grandfather clock is not here to intimidate you. He will be here to give you company. I am sure you will complement each other
You and I, have been on a long journey together.  And you will always remain the special one.

- August 11, 2012
Email ThisBlogThis!Share to TwitterShare to FacebookShare to Pinterest