About pigtails, jasmine flowers and half sarees


Yesterday, sitting in the lobby at the Marriott, I could not take my eyes off watching a lady staff with long beautiful lustrous hair, whose job it was to dust the tables, cushions and remove the litter left around in the lobby, that the guests would not care to remove themselves.
The session that I was supposed to attend was getting a little over my head. Moreover the room was packed with a thousand people and could have been the place for a kumbh mela style stampede if any more were to be accommodated there.
I stepped out for some fresh air and space in the pretext of making a call and attending to some urgent emails.

Jasvinder  came over to the table that I was sitting to do some cleaning up and I let her know that she had lovely long hair. (I do not know Jasvinder by first name … this is the name that I read over from the batch she was wearing over her uniform). She thanked me and walked away pretty pleased with my compliment.


It feels good when someone genuinely compliments you for your beautiful hair.
I should know it.
Many years ago, I was standing in the queue to buy a railway ticket at the VT station reservation terminal  in Mumbai. A white man presumably a tourist on a shoe string budget (they were not too many expatriates in India those days) was behind me in the queue.  It was not a long queue by Mumbai standards.  As I finished my transaction at the ticket counter and was about to leave, the man behind me made eye contact with me and let me know that I had lovely long hair.

I blushed, thanked him and moved on. But I must say I was pretty pleased with the compliment from a stranger.

Jasvinder, I am sure was equally pleased with my compliment.

I almost stopped myself before I wanted to tell her, you know what, I too had long hair dropping over till my knees a long time ago.

A Long time ago, I went to school with two long pigtails, well oiled, plaited and doubly folded tied up with red ribbons that were a part of the school uniform.

Every morning grandmother would untangle the knots in the hair, oil and plait them into two long pig tails, fold them up and tie them up with red ribbons.
The long string of fragrant Jasmine (malli) or Jathi malli or Nitya Mullai that would dangle between the two pigtails would be the icing on the cake.

The uniform was a brown and cream half saree.
Half-saree – that attire that blatantly announces the onset of puberty and the intermediate step to embracing the inevitable womanhood and all else that it comes with.

To be fair - Half saree is a sensuous attire.

It accentuates one’s feminity reasonably and yet adequately covers up one’s modesty.
(Depending upon how much of it you choose to cover up).

With the passage of time, the onslaught of the convenient and fashionable salwar kameez has left the inconvenient and not so fashionable ‘half saree’ a lot less popular among teenage girls. I was pleasantly surprised to see a few girls in half sarees at this public function I went to in Kumbakonam. 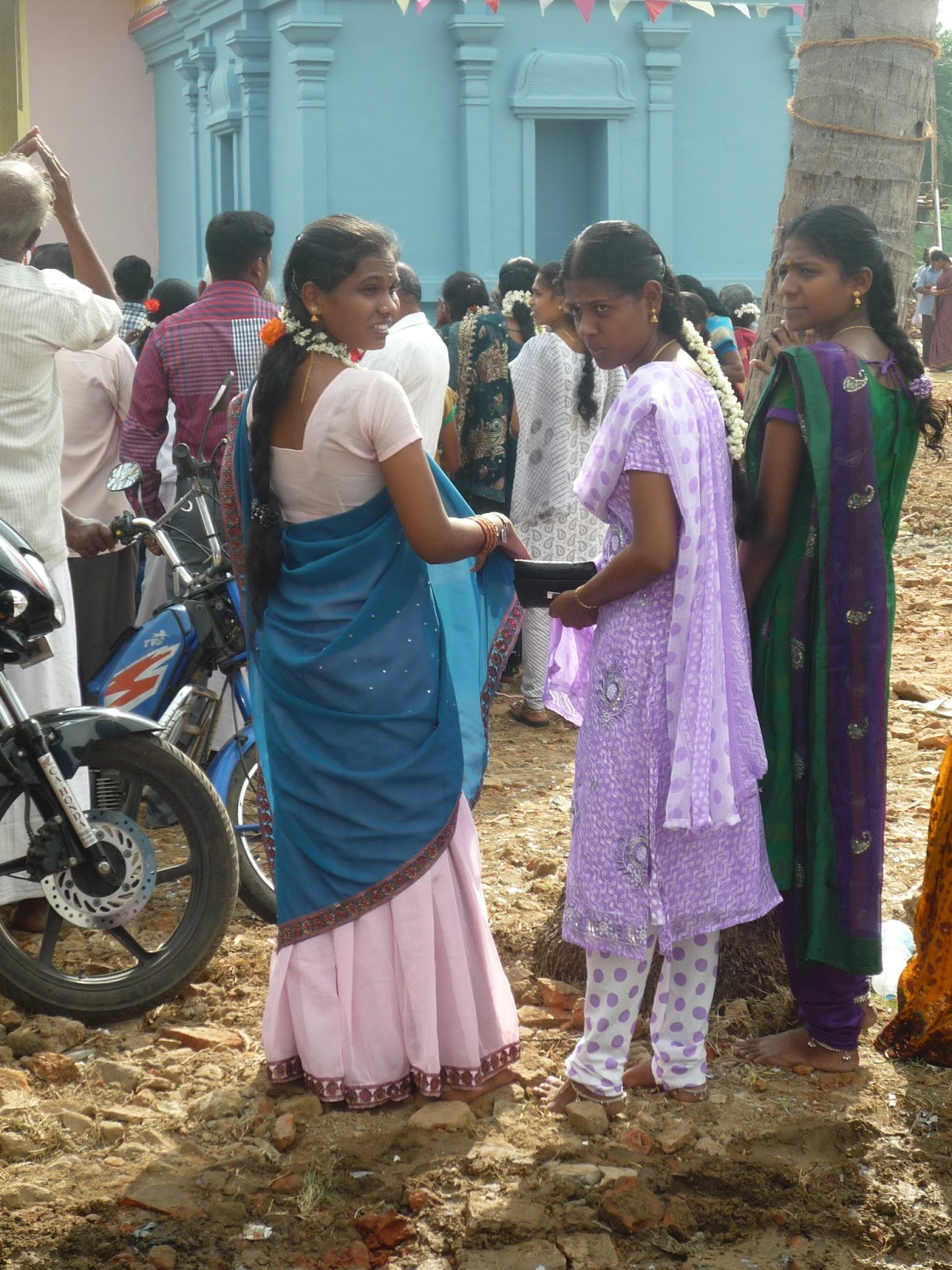 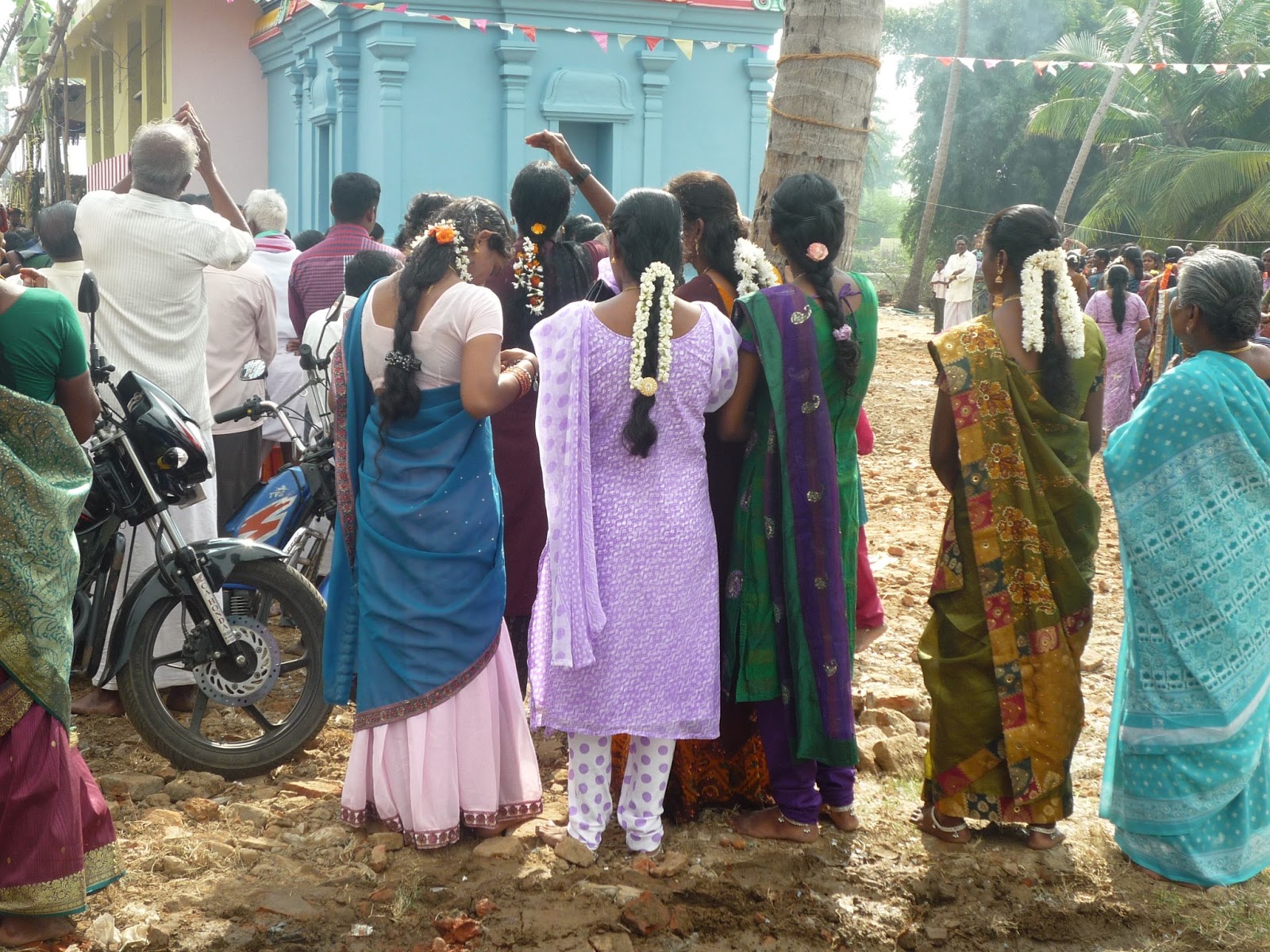 In my days, I was the one with the longest and the thickest hair in the class, if not the entire school.  I can say I had a great fan following from across all genders for my crowning glory.

My nieces, now aged 11 and 7, think it is so uncool to have long hair.

In order to keep up with the times, I too have slowly but steadily begun to subscribe to that view point.
It is indeed uncool to have long hair.
It is even worse to have them oiled and plaited.
It would be the ultimate fashion disaster to put on some flowers over your hair and go to school or work or even attend social functions.

Those are moments when you feel times have changed and a generation has passed by.

Unoiled, unplaited hair even on Sunday mornings was a sign of being unkempt.
Something that one had to be ashamed of.