Benares - the city of light -Part 1

In this city you stumble upon ancient structures crumbling but designed with intricate and ornate architecture inside the impossibly narrow alleyways. It is a city caught up in a Time warp.  It is here that the modern and the ancient co-exist peacefully without any contradiction. 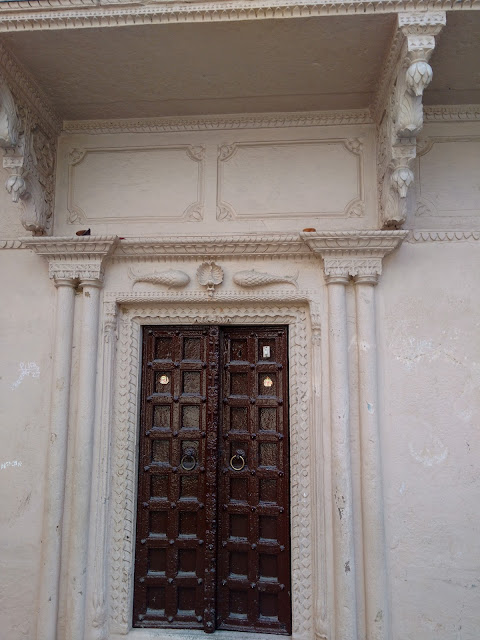 The intricately carved wooden door and the ornate architecture would lead to one to believe this must be the entrance to a harlem of a rich Maharaja's palace.

But only until you see the backdrop. Note the  scooter parked along the doorway in this picture shot from a different angle. This is the entrance of a household that would open into a courtyard with two or three storeuyed houses built haphazardly oover each other to accomodate many generations. The inhabitants would mostly be brothers of cousins  one generation removed.

These are the entrance doors to the 'Havelis' in the ancient city of Benares.
Situated among narrow alleyways with scooters, bulls, goats and human being competing for space. The tussle between modern way of life and their right to this small patch to call as Home in this holy city is what  keeps generations of families together in spaces that are impossible to imagine. 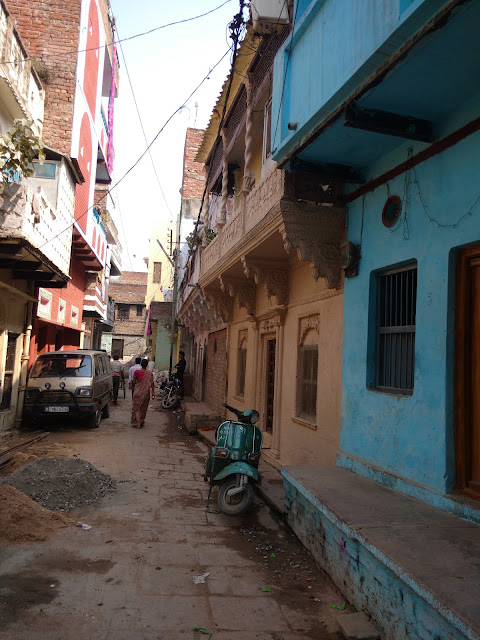 The doors with low entrances evolved during the Mughal rule in India.  The holy city of Varanasi, staunchly Hindu in its origins was attacked by the Muslim rulers time and again in the 17th and 18th century. The Hindu Priests and traders alike who lived in these Havelis constructed their doorways deliberately low because one would require to bow their head down and enter into the courtyard one by one.
This acted as a barrier. The enemies would not be able to storm into the house suddenly and hold them hostage  A Batallion of army or attacking soldiers would take some time to enter because they would have to bend down and enter one by one.
That would give the male members of the entire Haveli time to gather up and prepare for the combat.
Moreover when a small door like that opened into the center of a courtyard, the entrant was visible from almost any vantage point across the house.    ( No CCTV cameras in the 17th century ) 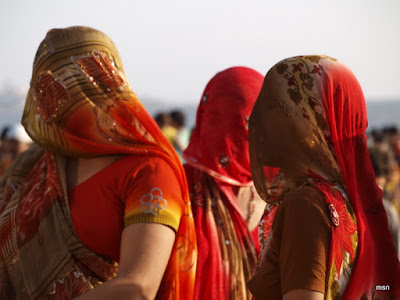 A local historian also told me that the system of purdah / Ghunghat among Hindu women evolved around this  time.  The Hindu women of the generations before the Mughal invasions would wear clothes that truly reflected Hindu religions openness towards feminine sensuality.

It is in the mughal era that Hindu women  started covering their heads and faces for fear of getting kidnapped by the enemies.

This post is submitted as part of the Thursday photo challenge where the theme is
"BARRIER" (Wall, Fence, Gate, Door, Stanchions,...)
- May 29, 2016
Email ThisBlogThis!Share to TwitterShare to FacebookShare to Pinterest