The tourists from Siberia


It is a flight they take to travel more than 10,000 kilometers all the way from Siberia. The flight takes them all the way from the icy winters of the Arctic circle, from Siberia, through Afghanistan and Central Asia before arriving along the river beds of the River Ganges.  With the onset of a comparatively milder winter, these tourists flock the city of Benares in thousands. Their return flight is not until the harvest season in February when the mercury in Benares rises and signals them to prepare themselves along with their young ones to make the return flight.

Apparently as the temperature drops beyond livable conditions in the arctic circle, a hormonal change in their body signals them to prepare for the flight that would bring them to the wetlands along the Gangetic plains. They are tuned into a sixth sense that maps the exact path of their flight with astonishing accuracy so much so that they arrive at the same spot every year without ever missing the route.  The Bharatpur bird sanctuary a few hundred miles away from Benares  hosts many species of these migratory Siberian birds during this season. 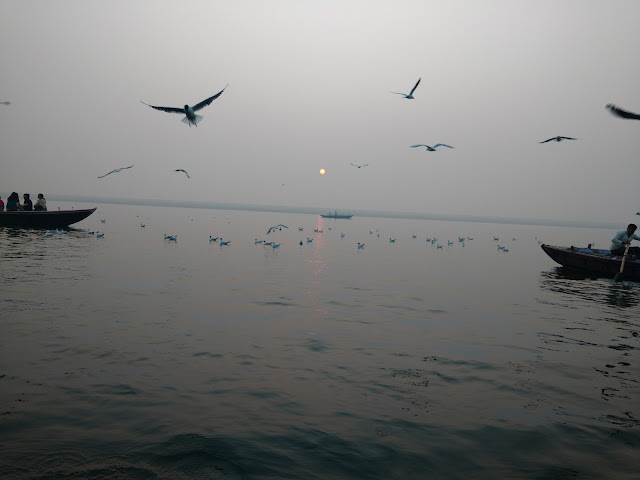 The months of November and December is the breeding time for these Siberian birds and by February the young ones have developed wings to commence their debut flight back to the Arctic Circle.

While there are many species of the Siberian birds that arrive along the Ganges, the most common one is the Black headed Gull known by its scientific name ‘Larus ridibundus ridibundus’. 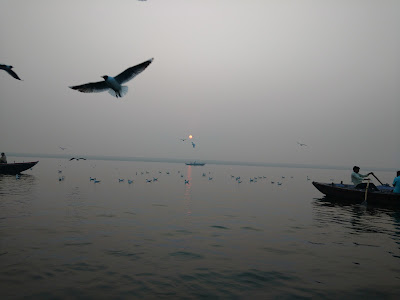 It is pre sunrise time and the Ghats along the river Ganga in Varanasi is buzzing with action. The pilgrims have come to take a dip in the holy river. The priests, sages and the common men alike are also getting themselves ready to bathe in the river before going about their daily chores.

Akhil, my boatman for the day picks me up at the Dashaswamedh ghat and rows the boat to the middle of the river bed. It is a late February morning and the sky is greyish black. I wonder if the sunrise would be clear enough for me to do the touristy thing, of clicking the sunrise along the river bank. I am not very optimistic but Akhil says it would be a fabulous sunrise this morning.  I dismiss his optimism as the usual sales talk and take in the sights as we row along the boat that has been chartered for me this morning.

A small boat made of thermocole sails past us.  Akhil asks me if I want to have an up and close view of the Siberian birds and I nod. Akhil’s eyes make contact with the boy on the thermocole boat.

He is sailing towards us on the makeshift thermocole boat and hands over a paper cone filled with seeds.  This is the bird feed that he is selling to me.  I buy a paper cone full of gram seeds.

The little boy, not more than 10 years old shrieks out... caw…caw… caw and the Siberian birds come flocking towards our boat as I sprinkle out the seeds.  He hands me a handful and I repeat after him. Akhil, with a practiced gesture and tone now tells me to hand over my camera to him and sprinkle the seeds.  After all he has been there, done that. Day after day, tourist after tourist. 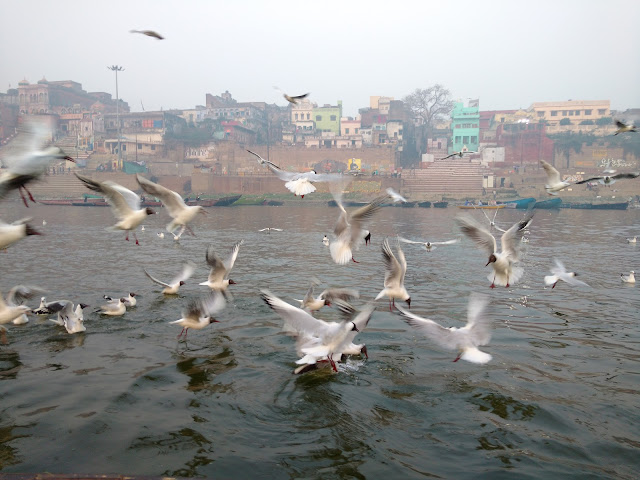 Once we have captured the moment in the digital format he tells me about the Siberian birds and their migratory flight from Russia. Apparently when they arrive in November they are white like snowflakes. By the time they leave they turn greyish. But they return  without fail every year before the onset of winter and fly back soon after the festival of Holi.
True to his prediction the sky is now painted in hues of orange and grey.  Any moment from now the orange ball of fire will break open from the skies despite the overcast sky in the not so distant horizon.
And that is exactly what happens.

I live in that breathtaking moment only occasionally remember to click the pictures of that much awaited moment. As if reading my mind, Akhil takes over my camera and gets clicking, leaving me to enjoy the moment.

The moment passes.  The boat has now sailed deeper into the river. We then get talking.

Akhil my boatman studies History and tourism in college. This is holiday time soon after the exams and that is when he takes the occasional tourist rowing in any of the boats when the real boatman Mukesh is out of action.   He adds to it saying, he does not get paid for the work.  He depends on the tips from the tourists to earn his money for the day. I know he has made his not so subtle pitch and I make a mental note to tip him after the boat trip.
On our way back, he rows past and takes me close to the Harishchandra Ghat where a couple of dead corpses are burning. I am warned not to take the picture of the dead as it is considered disrespectful.

We then row past the Dhobi ghat where the washer men are washing the linen by beating them on the stones and dipping them in the river water after scrubbing them with the sand and clay washed down the river bank.

As we row along I watch the devout pilgrims taking a dip into the Ganges while chanting the holy mantras as the sun rises above on the horizon. A dip in the Ganges is supposed to wash away the sins of a lifetime.

Somewhere in the background a flock of Siberian birds are cawing while in yet another boat, yet another tourist is sprinkling seeds that he has bought from the little boy rowing down in the makeshift thermocole boat.

Watch it all  here in action


This post is a submission for the Thursday photo challenge where the theme this week is
"FLIGHT" (Bird, Insect, Jet, Airplane, Seeds,...)
- June 05, 2016
Email ThisBlogThis!Share to TwitterShare to FacebookShare to Pinterest