What they don't teach you in google and youtube...

When I first set up home, very often I would go through these intense cravings for what is famously known among bachelors and spinsters as maa-ke-haat -se-bana- ghar-ka-khana.

In the initial years, my weekly calls to amma involved noting down the recipe for something that was her signature dish.Years later my calls no more involved noting down recipes. One just had to google and there were a hundred and one variations of authentic recipes for ‘vazhapu parupusali’ or ‘rava ladoo’ available on the ever so resourceful WWW. What more .. some had video demonstration uploaded on the youtube. They were far more exacting in measurements and ingredients and even doled out information on where to find the product or a brand when you were living away from .

It is while googling these sites that I discovered the magical world of ordering online and experiencing the wonders of dessicated coconut, tinned jackfruit and frozen drumsticks.

Humility is not my forte and I would generally like to believe that I am a self taught (courtesy : google) cook who knows how to dish out some very exotic traditional dishes that my mother never bothered to teach me.

Then there are some things that money cannot buy although they say for everything else there is mastercard.

Much the same way there are some things that you cannot learn without being taught,although for everything else there is google.

Making a decent phulka roti, jowar ki bhakri and draping a nine yards saree are some of them. Could be many more, but I have’nt come across many things that google and youtube cannot teach.

oogling can make you headstrong. You tend to live under the illusion that you can figure out just about everything, but that is only partially true. Despite the self taught chef that I am, after many disastrous attempts at making a decent phulka roti, I learnt it by being an month long apprentice to my domestic help’s 11 year old daughter who could dole out a perfect roti in minutes without any fuss. I suspect she thinks I am a little slow at the uptake. She is entitled to form her own opinions.

My domestic help is currently teaching me 'jowar ki bhakri' – a roti equivalent made with a less glutenic form of grain called millet. Jowar ki bhkari can only be made and eaten fresh. Else it tastes like rubber.

I am yet to get it right. All I can say is that my domestic help is a patient teacher.

The other day she was telling me that where she comes from, girls are taught to excel in bhakri making skills. A potential bride seeing ceremony would involve testing the girls versatility in doling out a perfect bhakri in as short a time as possible. (Wish they did that where I grew up. I would have remained blissfully single L. Unfortunately they only ask us to sing some perfectly boring ragas composed by Thyagaraja and the likes which more often than not the potential groom has no intellectual potential or the mental frame of mind to appreciate.)

Draping a nine yards saree is yet another thing that is available on the internet. But then there is only so much that googling around can teach you.

On traditional occasions in families such as mine, it is expected that the married women drape the nine yard saree. 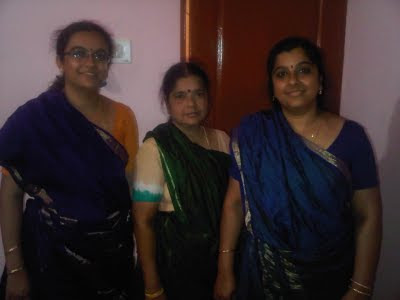 In my grandmother's days it was a daily attire that she switched into ever since she got married at the age of sixteen.

In my mothers time the nine yards saree was reserved for special occasions like religious ceremonies, births, weddings and shrardhams. For normal days the nine yards was replaced by the six yards saree which was easy to drape with an underskirt to tuck it in.

In my days the Salwar kameez has replaced the six yards for the day to day grind. The Six yards of saree is now reserved for special occasions like religious ceremonies, births, weddings and shrardhams. For other days it is the salwar kameez with or without the 'dupatta' depending upon what level of modesty you like to adopt which in turn depends upon what audience you are catering to. .

I recently got myself an elaborately embroidered silk salwar kameez stitched for lighter occasions like wedding receptions and parties. The day is not far away when denims and tees would replace salwar kameez for a normal day to day wear for the average Indian woman.

There was this pattu pavadai and pavadai davani that was worn before and after we attained puberty respectively. Not sure how many teenage girls do attempt the pavadai dhavani these days.

To its credit Pavadai Dhavani is a sensuous attire. It is worn at an age before stretch marks and layers of abdominal fat have taken a toll on one's feminity. Much like the Six yards and the nine yards sarees they can be conveniently draped in a way that helps you flaunt what you want and conceal what really is’nt something you are proud of.

The beauty of these traditional Indian costumes is that you can just be as modest and as sensuous as you want to be in these attires. That is not something that can be said about that comfortable pair of jeans and tees that we love getting into. They are on the face, in the sense that they reveal you exactly as you are. Not an inch lesser, not an inch more.

Sorry for the digression.

This was my second or third attempt at draping myself in a nine yards saree. On all other previous occassions, some elderly aunt in the family would always take it upon herself to drape me in the nine yards.

With modernization sweeping away all that is so preciously and cutely traditional, this time I took it upon myself to master the art of draping the nine yards and carrying myself comfortably along.

With a little help from my sister who by now has mastered this art, I was successfuly draped in all of nine yards. It involves doing away with the skirt and all other garments that are required underneath a six yard saree. It is draped comfortably in between the legs before a second round drapes you along the waist.

A little caution needs to be exercised while tying the knot that tightens the grip around your waist. Too tight can be very uncomfortable especially if you are going to gorge on a sumptuous meal thereafter. A little too loose could lead to a disastrous wadrobe malfunctioning.

Similarly unless you have shapely, shaved legs make sure the pleats of your kosavam hang well below your ankles. The nine yards tends to rebel against forces of gravity and it is not very uncommon to find oneself showing off a good deal of calf muscles.(If you have them flaunt them … provided they are shapely and shaved.)

Among all other things draping a nine yards and carrying yourself comfortably in one requires practice, patience and dare devilry.

Among the many trivia that I chanced upon while googling on how+to+drape+nine+yards+saree, I have come to know that Jhansi ki rani, who mounted a horse and carried her son Damodar on her back was draped in a nine yards saree while she bravely fought the British.

I just have one question for which I have not quite had a clear, precise and on the face answer form the wise women that I have known.

Even sites like Ask jeeves, ask laila and Yahoo where they have answers for just about everything from how to know you have bad breath to how to survive a heartache seem non-committal on this topic.

The shy, modest person that I am, it is not something I can expect anyone to teach me at this age.

For sure I do not expect this to be available on the youtube either.

How on earth do you pee in a western toilet when draped in a nine yards saree, without having to undo it all?