It is a Sunday and everyone in Tirunelveli knows that ‘Iruttu kadai’ Halwa is closed on Sundays.  If you are a visitor to the town, you will have to wait if you want to taste their original fare.

But other shops claiming to sell the original ‘Iruttu Kadai’ halwa are sprung across all over the town and even online.   And their claims are not entirely spurious.  When the original ‘Iruttu kadai’ Halwa is open for business, they stock up knowing very well that the customers that visit the Nellai town on Sundays would not be disappointed.

There is also the claim that the ‘Master’ (i.e. Chef) that ‘Iruttu Kadai’ halwa employs also runs this as a side hustle and that is the reason you get the original Iruttu kadai halwa even if you do not buy it from Iruttu kadai. 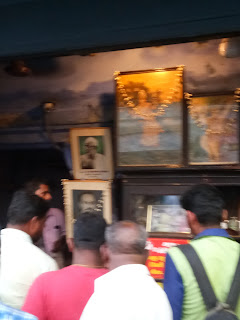 The name ‘Iruttu kadai’ in itself isn’t very appealing as any brand marketing professional will tell you.  Literally translated, in English it means the dark shop.

And that is what it was, up until the late 1950’s, a small dark room, almost like a hole in the wall opposite to that imposing and ancient Nellaiappar temple.

That is until electricity came and they installed a couple of small bulb lights, to dispel the darkness.

Bijli Singh, a Rajasthani sweet maker established this Halwa shop in the 1940s

The word got around and the unique taste of the Halwa from the dimly lit shop opposite the temple was unmatched with any other. The recipe was no secret.

In fact, even today you can google it at try and attempt to make it yourself.

Some attribute its unique taste to the water from Thamarabarani river that flows across Tirunelveli. Others claim that it is their method.  The hand pound and extracted wheat grain milk.

Apparently the halwa is made from the milk taken out of well soaked wheat grains, and you can feel the change of taste even if the soaking and extracting of the wheat milk is done hastily.

There are others who attribute this unmatched and unique taste to the stirring of the halwa as it is getting prepared in the huge pans.   While other halwa shops, owing to bulk production have, over the years given up the manual stirring and have used machinery to stir huge quantities of halwa stock, Iruttu kadai continues to do it the old-fashioned manual way.That explains why they are able to produce only a limited stock each day and why they get sold out much before the sun sets.


It is perhaps the dedication and devotion to quality and their stubborn refusal to fall for profits that they could make if they expanded their operations, shows up in the unique and unmatched taste of their halwa. 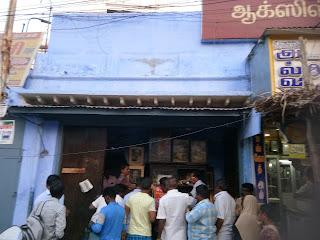 There is usually a queue almost an hour before the shop opens in the evening at 5.00 pm.  A super-efficient set of men dole out half kgs packs of Iruttu kadai halwa pre-packed in trace paper and banana leaf while a male member possibly from the third or fourth generation of the family handles the cash.  You could buy multiples of a five-hundred-gram packet or buy a small quantity rolled out to you in a small banana leaf for ten rupees to indulge right then and there. Most customers, do both. Buy a few packets to take home for near and dear ones and also a couple of small ones for them the yield to the temptation right over there.

Local families visiting the Nellaiappar temple usually make it a point to stop by and relish a small quantity of a ten rupee per banana leaf halwa before heading out.

Surrounding the original Iruttu kadai halwa shop are many shops claiming to sell original Tirunelveli halwa.   Yet the original shop is unfazed by competition.

There is always a queue and you count yourself lucky if you manage to buy some of the stuff while the stocks last.  They close the shop once the stock is over.

They are like that.  Old fashioned and utterly unperturbed about competition, market share and lost opportunity to heap profits considering the huge popularity of their local product.

When you put that sweet and slightly warm ‘Iruttu kadai’ halwa it meets your taste buds and slowly melts in your mouth. As you relish the taste, the feeling of pure ecstasy then travels along right down and up until it stirs your soul.

That is when you instinctively understand and pray that they remain stubbornly old fashioned like that.

Sometimes you regret ... deeply regret to have missed out things in life...

Publishing that post on Iruttu Kadai Halwa was one of them.  Written alomost an year earlier ... it went into heap of draft posts in this blog ... blame it on the blogger's block.

And then the lockdown happened.
And this hit headlines of our local newspaper

The 70 year old  owner of  Iruttu kadai halwa, Hari singh, son of the original founder Bijili Singh and grandson of Krishna Singh kills himself in Tirunelveli because he tests Covid  positive.

OMG ... I  scroll down google photos and show it to my family ... I have been there ... I know ...
I fumble, gathering my thoughts and recollecting the image of Hari Sigh doing brisk business  that evening, that i did not have the heart to talk to him in that busy hour when his cash collection was ringing and halwa packets were disappearing.
The taste of that warm ball of halwa wrapped in banana leaf  for ten rupees and selling like hot halwas at the stroke of 5.00 p.m. It lingers in my mind but chokes my throat ...

OMG ... I can feel the loss ...of a good soul ... of  undying trust ... of  uncompromising quality ... that brand that was built not just with ingredients but with those human qualities  that  so many other businesses have compromised in their quest to grow big and reap profits. Hopefully the legacy will carry on and will never be compromised. That is what 'Iruttu kadai Halwa' stands for.

Thank you for getting me to publish this  long forgotten post ... written much before the tragedy and the lock down blues.

- July 19, 2020
Email ThisBlogThis!Share to TwitterShare to FacebookShare to Pinterest