To call it a structure symbolizing classic minimalism would be an oxymoron.

The Harmandir Sahib or the Golden temple of Amritsar is not only a photographer’s delight but also a place that can evoke feelings of serenity, awe and humility in you.

As you approach the main square of the city which is the main thoroughfare and the  entrance to the Golden Temple, you realize that the chaos, haphazardness and lack of aesthetics that signify ancient and crowded parts of most Indian cities including Amritsar, suddenly disappear and a new world emerges.
The side alleyways skirting the main precincts of Golden temple are a complete contrast to the main square. They, like any other ancient part of Indian cities are crowded and crassly commercialized.

Pink brick architecture and marble sculptures adorn the commercial outlets that lead to the Golden temple.  The signage of the shops, big and small are all uniform and aesthetically displayed.  There are no bill boards to ruin the aesthetics of the heritage site.

(However, inorder to accommodate the need for modern commercial and consumeristic demands, at the center of the square has a huge electronic board, making it look like Times square in NY or Piccadilly circus in London.)

On the main approach road to Harmandir Sahib are sculptures of Sikh men and women performing Bhangra and Giddha which is a selfie hotspot among tourists and pilgrims alike. 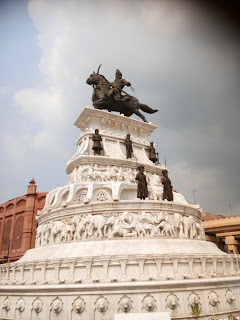 Eateries advertising ‘Asli Amritsari fare’ are dotted all along the way. The small hole in the wall shops selling Punjabi papad and wariyan, the Punjabi Lassi, Amritsari kulfi and the Kulcha outlets tempt you and leave you salivating.

Desperate salesmen from shops selling dress materials and intricately embroidered ‘Phulkari dupatttas’ beckon you to have a look. Just as you are getting seduced and stop by to show a faint interest in window shopping, a stray rickshawallah appears with his rickshaw and whispers into your ears.  ‘Ten rupees to the Phulkari wholesale market, just ten minutes from here.  Wanna take a ride?’

It is not easy, not to be overwhelmed.

But the sound of the soulful kirtan from the shrine beckons you via the loudspeakers and reminds you about the main purpose of the visit.

Hundreds of volunteers strive to keep the premises in and around the Golden Temple spotlessly clean.  At the free shoe depositing counter, well dressed and well to do men and women pick up your foot wear and deposit them in shoe racks before handing you a metal token acknowledging the receipt of your foot wear. The service is quick and efficient. Their humility and devotion strike you, the first thing before you enter the Gurudwara.

As you enter the vast area that forms the outer sanctum of the golden temple, the clear golden reflection of the main sanctum sanctorum or the Darbar Sahib around the pool of water surrounding it makes you want to pull out your camera and capture the picture to preserve the memory for eternity. 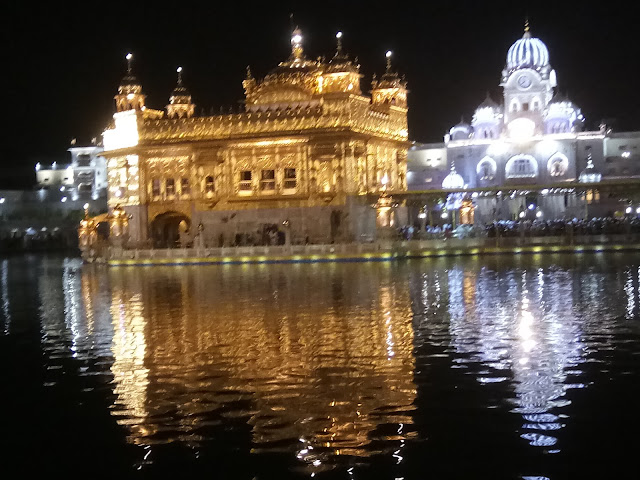 It would be much later that you realize, that there would be plenty of such opportunities, because the structure and the architecture of golden temple is very alluring and photogenic that one would just click away to glory from every angle and every direction at every available opportunity both in the broad daylight and well lit nights.

Displays of the lyrics and the translation of the kirtan being sung inside the shrine are displayed on the TV screens in Punjabi and English that flash all over the shrine.  It renders an ambience that makes you want to sing along or at least hum the tune even if you are not familiar with the music.  Pious devotees who are regulars and are familiar with the Guru Granth sahib, sing along while waiting in the queue that is very well regulated.

As you enter the inner precincts of the Golden temple the walls covered with marble have intricate works of floral motifs that strike you at the eye level.  Above the eye level of course rises the huge walls and domes that are plated with gold on the inside as well as on the outside, thus giving Sri Harmandir Sahib its English name ‘the Golden temple’. 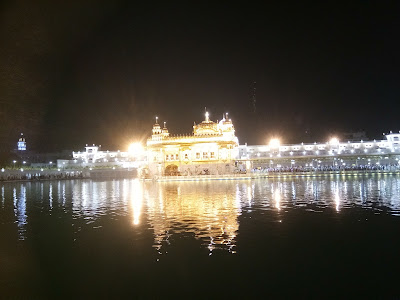 The Gurudwara, Harmandir Sahib more than 400 years old is built around a man-made water body, (Sarovar) and was completed by Guru Ram Das in 1577.

Guru Arjan, the fifth Guru of the Sikhs requested Sai Mina Mir, a Muslim Pir of Lahore, to lay its foundation stone in 1589.

However, unlike many other 400-year-old structures, the Golden temple looks new, clean and resplendent even after all these years. Thanks to the tireless efforts of the devotees who clean and polish every nook and corner with devotion everyday of the year.

One of the experiences that one should not miss while visiting the Golden Temple is the ‘Langar’seva.

Helped by hundreds of volunteers, the world’s largest community Kitchen at the Golden temple serves free food to more than 75,000 - 100,000 pilgrims everyday of the year.   Two halls each with a seating capacity of 5,000 are used alternatingly to serve the steady stream of pilgrims and visitors to the Golden temple.

While the food is prepared by permanent staff (sevadaars), 90% of the staff who help in its preparations are all volunteers.  One can volunteer at the Harmandir sahib to do seva for an hour, a day or even a week. In keeping with the tenets of Sikhism, ‘Seva’ or volunteering helps one to keep one’s ego in check and the humility that it emanates sends across a sense of peace and satisfaction among the devotees.

At the entrance of the ‘Langar’ hall, the volunteers seamlessly hand out plates, spoons and cups, serve daal, rice, vegetables and kheer for the people sitting in a line (pangat) for the langar. In the Kitchen other volunteers are busy rolling out the dough to make roti. There is also a huge machine donated by a Lebanese devotee for making rotis which doles out about 23000 Rotis in an hour that is used on important occasions or when the crowd is large.  On other days women volunteers manually make the Rotis, while others clean and chop huge quantities of vegetables. The stronger ones stir the food that is being cooked in huge vessels. A stream of volunteers collect the used plates, empty them, soak them in water and wash them, all in an assembly line procedure.
The steel utensils used by the pilgrims go through five rounds of cleaning and another round of drying before they are used by another set of pilgrims at the Langar. 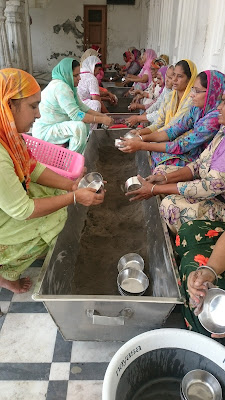 One never need to worry about hygiene and cleanliness at the Gurudwara. Even the round and shallow water dispensing cups (yes not glasses or tumblers) go through several rounds of cleaning using ash powder by volunteers before the next round of water is served in them.

The service is quick and seamless at the Langar. The food is always tasty although simple and healthy.  In order to keep up with the dietary requirements of all pilgrims the food served at the Gurudwara has always been vegetarian.
This was before veganism caught up as a way of life.
Vegans beware. Food at the Langar is laden with ghee (clarified butter) even if you skip the kheer (rice and milk pudding) that his served at the Langar.

A visit to Golden Temple is incomplete if you haven’t had the Kada Prashad. As you emerge out of the Darbar Sahib, or the main sanctorum where the Guru Granth Sahib is kept, volunteers dole out a handful of hot brownish colored sweet that is oozing out with ghee (clarified butter).

As you put it in your mouth and it melts, you delight at the mildly sweet and smooth texture of the simple sweet that is an offering from the Gurudwara. Many a devotee cannot resist a second helping.

For those who cannot resist the temptation to a second helping, a counter that opens from the outside of the entrance also serves a handful of warm Kada Prashad.  As the sweet melts into your mouth, you realize that warm ghee is dripping down from your hands. Just when you want to reach out for that tissue or towel to wipe your hands, you observe others around you. You realize that they are wiping their entire hands with the molten ghee. Not wanting to take the trouble of reaching out to a tissue paper or a handkerchief you emulate them by wiping your hands too.

Whoa!!!   slightly warm clarified butter or shudh desi ghee is nature’s own moisturizer and an effective lip balm to soothe dry lips. Your skin automatically softens and happily soaks in the moisture, much like your soul that soaks in and seamlessly dissolves in that pious and serene atmosphere of the Gurudwara.

(Try making and eating Kada Prashad at home, uh … it does not quite give out the same feeling.)

You have had your fill of the Langar seva, have clicked enough and more photographs from all possible angles of the stunning Golden temple and yes… you have possibly had a third or fourth helping of the Kada Prashad. 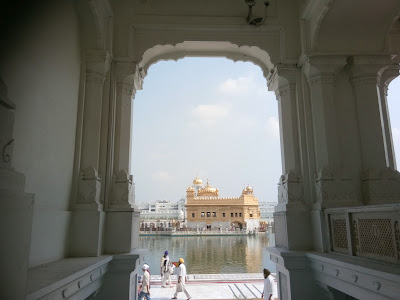 It is now time to exit.

As you walk out of the Golden temple, you observe that people old and young, rich and poor, but most importantly from all religions and nationalities visit and are welcomed into the Gurudwara.

When you walk back to the free shoe counter and reach out to hand over your token, once again a prompt service awaits you.  A Sikh volunteer takes your token and brings out your shoes and hands it over to you.

As I sit on the nearby bench to put on my shoes, I observe something and there are goosebumps all over my body. Yes, that mud strewn, dust laden, dirty Nike shoes of mine, weather beaten and weary from a recent week long trek in the Himalayas had been thoroughly cleaned possibly while I was clicking away pictures or having my second helping of the Kada Prashad.

That kind of selfless service by a faceless stranger moves you. 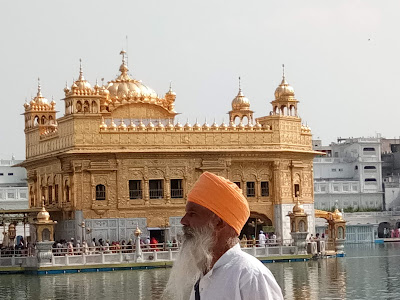 - October 26, 2019
Email ThisBlogThis!Share to TwitterShare to FacebookShare to Pinterest