It is the voice of a grown up man and he is frantically crying out in panic. Even when the phone is not on a speaker mode, we can hear his frantic panic driven voice. Vava Suresh – our host answers him on his mobile patiently without letting any of that panic get to him. We are in a car along with Vava Suresh and are being driven to the house of the caller. This is possibly his fifth call in the last fifteen minutes that Vava Suresh has received.

Apart from the two of us, Vava Suresh and his driver there are seven other co-passengers in our car. We are slightly uncomfortable, but not because there is no place for us to sit. In fact, it is very comfortable at the rear seat But because all our other co-passengers are merrily occupying the boot space in the car.

The last one, we picked up from the backyard of a small corner shop where Suresh had been summoned. On a normal day, Suresh could be catching about a dozen snakes ranging from wall snakes, rat snakes, Russel Vipers, python and even a King Cobra from all over Kerala when he is summoned by people who have spotted the reptiles in their backyard or in their wardrobes.

We have been with Vava Suresh for over five hours today. Our co-passengers are safely tucked into plastic containers, poked with holes through a screwdriver and safely closed with a lid. The driver who incidentally is Suresh’s childhood buddy is now used to this task day in and day out. He pokes a few holes on the sides of the container to ensure there is breathing space for our co-passengers and they do not feel claustrophobic.

Our next call is from a palatial house about 30 kilometers from where we are currently. Apparently, they had spotted a huge snake in their backyard. It is well after sunset and there is no sun light to figure out where the snake could be. Undeterred we are now headed to their place. 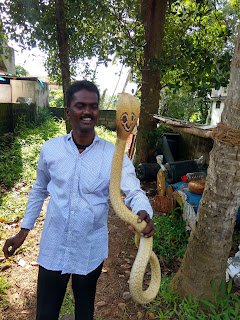 Vava picks up his torch light and clears the way for me to accompany him till a safe distance. Here too there is a crowd that has gathered to witness their local celebrity in action. Effortlessly Vava uses the torch and a stick and flashes it on the snake. He tells us after he has had an up and close look that it is a Python and indeed, it is. When Vava deftly pick it up and brings it along to the well-lit front yard of the house the women in the house shriek out of shock. The men gathered around are amazed at the sight of a huge python.

But what he does next comes totally out of the blue and leaves everyone including me awestruck. He asks for a pen or a small stick. Someone hands him a pen. With that, he opens the mouth of the python to show us its fangs. The saliva – transparent yellow in colour is the venom that it spews out when it goes about killing its prey. [I1] The wide-open mouth now has saliva dripping over the pen.
Vava picks the dripping venomous saliva and holds it upon his own mouth. About two to three drops fall into his mouth from the pen and he swallows it. He asks the hosts to give him a glass of water because he does not want the after taste of the venom to linger on. It is these small drops of venom that build the immunity in his body to withstand occasional snakebites.

There is a scared little girl who peeps out of the window of the living room to see all the action. Vava notices the little girl, puts the python over his neck, approaches her and strikes a conversation with her. He asks her which class she studies in, which school she goes to and what her name was. The little girl has now warmed up to him and slowly comes out to have a full look at the Python. Unbeknownst to the little girl we now know that Vava is investing in the mindset of the future generation.
Like in all our previous places where he would catch the snake in about couple of minutes and then spend the next fifteen minutes to display his catch to a crowd from a prominent place where the crowd would gather to see the snake man.

He is a celebrity in Kerala, has been featured in many television channels and is a household name. 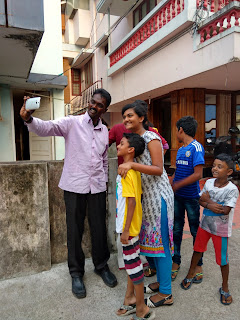 Young boys take selfies with him, touch the snake, some strike conversation with him to understand the features and most of all they just want to share their excitement in the happening of all things. After all, here is a fearless man, whose bravery every young boy and man would like to emulate.

In all this Vava ensures that the young boys and girls get comfortable with the reptile and in holding it effortlessly, his actions speak louder than the words.
All he wants to convey is that the snakes and human beings can co-exist together as long as we do not do any harm to them.  Killing snakes is  more often than not an unnecessary cruelty meted out by human kind out of their own fear and misconceptions. Not all snakes are venomous and the ones that are, do not look to harm human beings, unless they are themselves in any form of danger.
It is almost ten in the night and the past seven hours of being with the snake catcher in action seem so surreal to us. Our next call is from a place that is about 75 kilometers from where we are. It would soon be bedtime for us but Vava Suresh and his driver are fresh as a flower and are raring to go. His driver had resumed his duty this afternoon. Even by those standards, this is more than a nine hour job for him.
Apparently, everyday is like that for Vava Suresh, Kerala’s most popular snake catcher. Two drivers take turns to drive him around, and his job is a 24/7 job for which he hardly takes any money. Those who can afford give him whatever he can. The snakes do not look at the economic status of the people in whose house they stray to take refuge. And so, if it is a poor man’s hut where he has been summoned or like in this case a small corner shop, Vava Suresh would just refuse to take any money. Mostly the rich give him a few hundred rupees every time he has rescued a snake from their place. We do our math. The cost of fuel alone would be more than the occasional donations that he would get from catching the snakes on a 24/7 job. It does not make economic sense.
We ask him how he manages to make ends meet. If he really wanted to, he could quote his price and people would happily pay to have a snake out from their backyard or front yard. He never asks for any money and lives on whatever donations come to him from people in whose houses he has gone and rescued the snakes.
His home is filled with pets. Dogs, cats, parakeets and of course snakes co-exist with each other. The roof is still the old-fashioned one made of dried palm and coconut fronds. At the entrance verandah is a display of the collection of all his awards by various associations. Prominent among them is his meeting with Prince Charles who on his visit to Kerala on a wild life conservation mission caught up with Vava Suresh. 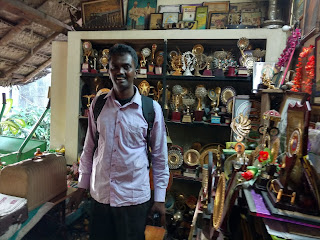 His mother dressed in an old cotton lungi and covered over with a white cotton towel passes by with a bunch of dried wood which she possibly has collected over the day and smiles at us without an element of curiosity. She is clearly used to fans, interviewers and visitors constantly dropping by to see her celebrity son.
‘Vava’ in Malayalam, the native language in Kerala means baby, and a prefix like that does not do justice to Suresh’s personality. But that is how his mother called him when he was young and the name and the prefix stuck. When he was a small boy of about 9 years, she caught him rearing a cobra in his room. Petrified, she smacked him hard and ensured that no such thing comes into the house. At that time, she was oblivious to her son’s calling of rescuing snakes and other animals. She says with a sense of resignation that while she still does not approve of what he does for a living, she has now resigned to the fact that this is what his life would be like.
He is rarely at home. Sometimes for days together, he would be traveling at the behest of frantic callers who would summon him to catch the snake they have just spotted in their home or backyard. 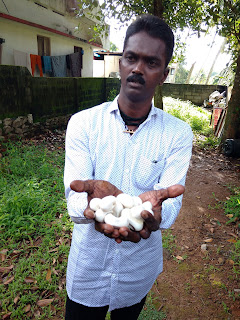 Elusive as he is to his own family members, his sister recalls an incident when once they frantically called him. There was a panic situation at home. The cobra eggs that Vava Suresh had collected and stored in the backyard had hatched and the baby cobras were slithering all over the backyard and into the house.
Vava Suresh was in Alleppey, a good four hour drive from Sreekaryam where his family lived. When the call came over his mobile, he in a matter of factly manner told her that it would take him at least five hours to drive down after finishing his job over there.

They spent a sleepless night in their own house till he came along the next day and put the baby cobras back to where they would belong. 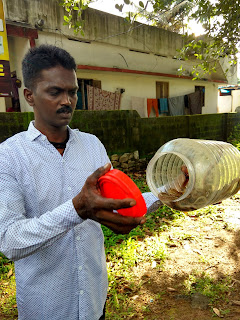 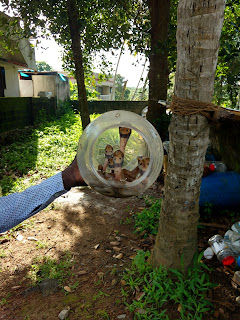 Once every two weeks he would take his collection and release them into the Neyyar forest reserve area where he has been given permission in the interest of ensuring the safe survival and procreation of the many species of snakes that he collects when they are spotted after they stray into the ever-expanding human habitat.

It is a fair bit that he does for the preservation of many reptile species that could otherwise go extinct due to human callousness.


- June 02, 2019
Email ThisBlogThis!Share to TwitterShare to FacebookShare to Pinterest