In the early 1900’s Ethnic Indians and  second generations Burmese Indians made up about 70% of Burma’s population.  Through the 1940’s, 50’s and 60’s the military unrest lead to the exodus of Ethnic Indians from Burma back to India.

Many of Amitav Ghosh’s books have touched upon the rich Burmese culture and the vast immigrant population that migrated from India throughout the nineteenth century and made a fortune in Burma.

Those who made it crossed the borders and escaped to India amidst war, rough terrains, disease, filth and squalor.  Many riches to rags stories have been told and retold about Indians who lost everything including property, jewellery and loved ones during the process of fleeing Burma during the Military insurgency.

Many of them were enterprising business men and women who, despite losing everything else did not lose their spirit of enterprise and were determined to start from the scratch all over again back home. 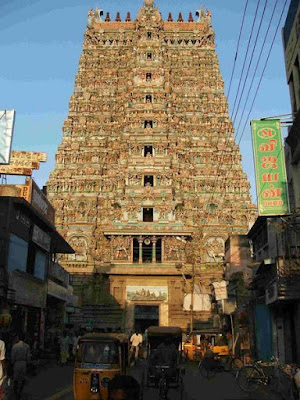 Padma and Devika’s grandmother was one of those refugees with an undaunted spirit. She fled Burma in 1960 with children and found her way to Madurai, the temple town in South India.

They stayed in what was initially set up as a refugee shelter camp for those who fled Burma and later transformed to become an up and coming neighbourhood called the Burma colony.

In the early 1960’s, after having found the roof above their head, the spirited lady decided to give the foodies of Madurai a sample of the Burmese cuisine.

She set up a small shack outside the Christian mission hospital in Madurai, where she made rice noodles with hand pound rice and served it with a tangy and spicy Burmese chutney. The sweeter version of the dish came with freshly extracted coconut milk and sugar soaked in the rice noodles.

The shack sold no other dish, but just idiyappam (rice noodles) with coconut milk and Burmese chutney, a spicy version made among many other things with seeds of  ripened Bittergourd.

Thus was born the Burmah (Burma with a H) Idiyappa kadai outside the gates of Christian mission hospital in Madurai.

The word spread about this new Burmese dish and people came flocking from all over the town to taste the delicacy.  And for those of us who thought Idiyappam was a traditional South Indian breakfast dish, this is a revelation.  It was an import from Burma in the last 50 years that has found its way into the south Indian cuisine.  Before the 1960’s a traditional Madurai Snack would be a ‘kuzhi paniyaram’ in its savory and sweet varieties or the Appam with coconut milk. 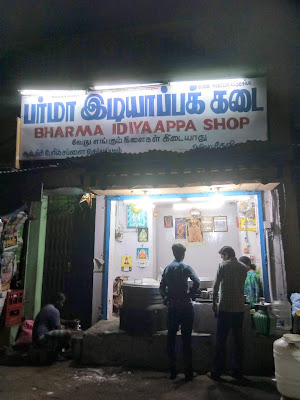 Idiyappam probably got its name because rice had to be pounded (pounding in Tamil means idi) and the rice balls boiled and then set into noodles like structures over a mechanical equipment called Nazhi. It certainly is a labor-intensive process, but the hard work is worth the effort for those savoring the delicacy.

As the years passed by the Burmah idiyappam kadai near the Christian mission hospital in Madurai grew and prospered. 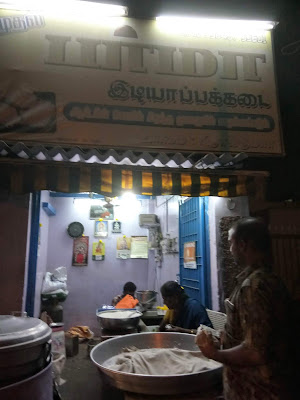 Today there are two branches of the same Burmah Idiyappa kadai run by Padma and Devika at around the same place where their grandmother had established the small shack from where she sold her idiyappam and made a living that put a roof under their head and brought food to the table.


Burmah Idiappa kadai finds mention in Trip advisor and a must see / must have place in the street food list for visitors to Madurai.

They operate from six in the evening till late until midnight.  ( Hence the photos of the shop in night mode)

Despite all the word of mouth publicity and the huge customer base that the brand has amassed there are absolutely no trappings of riches, or an aspiration to move up the value chain of fine dining in either of the sisters. 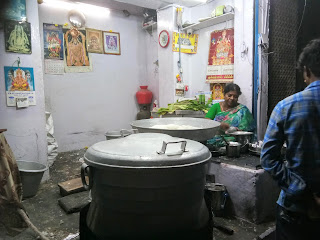 A Hole in the wall is probably an apt description to describe their shops. Well lit, neat and clean, their one room shops are situated on opposite sides of the road.  One adjoining the rear entrance of Christian mission hospital, the gate which is no longer in use and the other on the opposite side of the road. 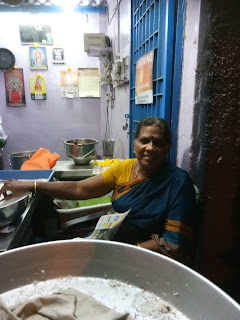 Padma and Devika personally supervise and run their respective eateries that open at 6 pm and close well after midnight at around 1.00 am.

There is a steady stream of customers to both the shops. It is more a take away joint than a place to eat. There are no chairs but Padma offers you a steel plate covered with a banana leaf where she serves you the Idiyappam, freshly steamed and laid out on a huge plate that can accommodate about a hundred idiyappams.

It is covered with a wet cloth and laid out in the open. Beside the plate is a huge aluminum cooker where more idiyappams are getting steamed.

While Padma dishes out the takeaway parcels a family member is busy pressing the rice balls into the nazhi and squeezing the rice noodles out of them. They would be laid out over a wet cotton cloth and steamed in the large vessel before being filled out in the huge plate from where the idiyappams get emptied out, thanks to the steady flow of customers who take home at least a dozen each along with some Burmese chutney and coconut milk for which they have brought along a stainless-steel container. The idiyappams are all packed in banana leaf and covered with newspaper wrappings with a cotton thread that ties it all up neatly.

All ecofriendly in the good old traditional style of takeaway joints. 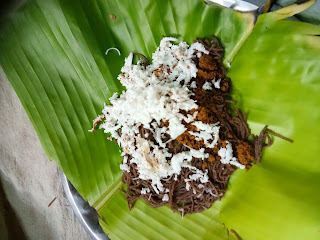 All for a pittance, which explains why they sell volumes and also why they get sold out so quickly.
Health conscious customers prefer the Ragi variety of idiyappams compared to the rice variety.

Padma says that off late more of the brown ragi variety gets sold faster compared to the rice variety
The family owned Branches of Burmah Idiappa kadai have over the last three generations maintained a non-negotiable standard of quality and purity in their recipes.

According to them, they are unable to expand because they are skeptical that the quality of their dish could get diluted and the hygiene factor could get compromised if they allow people outside the family to run the shops.

One of her sons works in the IT Technology Parks in Bangalore.  Inspired by the demand for eateries in the newly developing metropolis, they decided to employ and send a couple of boys from the small town of Madurai to assist her son and run the shop.

Padma says it did not work out because the boys found greener pastures in the big city and they did not want to employ unknown people to do the work as that would dilute the quality and hygiene that stands for the Burmah idiyappa kadai brand.  The equipment still lies in Bangalore, but the shop has since been shut.

Padma and Devika, the sisters who have set up shop on the opposite sides of the same road have their own loyal clientele and there is a mild sense of co-operative competition between them. On a busy evening when one runs out of stock, it is not unusual to buy or borrow from the other’s shop in order to serve their loyal customers takeaway needs.

They have no aspirations to be a McDonald a pizza hut or for that matter the Udupi outlets that dot the restaurant segment all over south India.

A stubborn commitment to quality and hygiene, reasonable pricing and personal supervision is what they believe is the secret to their success as an iconic brand in Madurai sought after by backpackers and locals alike.

There are many more idiyappam shops that have sprung up in the town of Madurai in the last couple of decades, but none pose any competition to them, Padma reckons.

A very matronly attitude, pleasant demeanor customer friendly poise that makes anyone warm up to her is what keeps the loyal customers coming back to her shop for an evening snack or a healthy late-night dessert.

- May 10, 2019
Email ThisBlogThis!Share to TwitterShare to FacebookShare to Pinterest