Cruising along the Konkan Railway – A tribute to George Fernandes

George Fernandes’s passing took me back the memory lane. 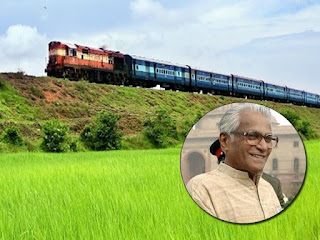 Like a true news junkie, after hearing about his passing, I gobbled up everything that has been written about him over the internet and covered by the media over the years.
Amidst all that juicy tabloid headlines about Jaya Jaitley vs Leila Kabir standoff after George’s Alzheimer’s affliction, to the tehelka controversy and varied opinions about the life and career of the firebrand union leader from Mangalore, here was an article by E Sreedharan, the main architect behind the Konkan railway (better known for his contribution towards the Delhi Metro) about George Fernandes that touched a chord in me.
I felt like I owed him a tribute.

It took me twenty-five years back in my memory lane.

I had boarded a rickety State transport (ST) bus from Mumbai to Ratnagiri, in Konkan for a college project. In those days it would take about twelve hours to reach through the tree lined state highway, up and down the mountains to reach anywhere across the Konkan coast.

That summer, the newspaper headlines were abuzz with Sanjay Dutt’s arrest following the police seizing the infamous AK56 from his house.

After the political turmoil that lasted nearly three to four years, the Congress government was in power at the center.

But it was something else that is etched in my memory.

My host’s family owned acres of Alphonso mango orchards in a small picturesque village about 10 kilometers from Ratnagiri towards Ganpati pule, which was not a tourist destination then.

Every year, towards the end of the harvest season they would travel back to their ancestral home  and host the ‘Aamras poori’ luncheon for their friends.  The fresh pulp of the ripe and aromatic Alphonso mango from the orchards along with hot pooris would be the signature dish served to the gathering.
That year, among their invitees were Madhu Dandavate, erstwhile MP from Konkan, his wife Pramila Dandavate and an unassuming man called George Fernandes.  As the star attraction of the afternoon, all attention was turned towards Madhu Dandavate the former finance minister and George Fernandes the former railway minister as they talked about the future of  Konkan Railway and how it would change the economic and social landscape of the poverty ridden Konkan region.

Those were the years when their government had been voted out and Congress was back in power. The future of the ambitious Konkan railway project was no more in the hands of those who had laid its foundation.

Most middle class Konkanis like my host had migrated to Mumbai or Pune, while still retaining their roots and ancestral property in Konkan.


During the conversation George Fernandes,  said that every Konkani will be lured to return home once Konkan railway was up and running.

‘ Koknaacha .. manoos kadhi kokanthoon door jaat nahi , punha to parat kadhi na kadhi yetoch’ he said. ( The Man from Konkan, never leaves Konkan permanently , he is destined to return home at some point in his life…) 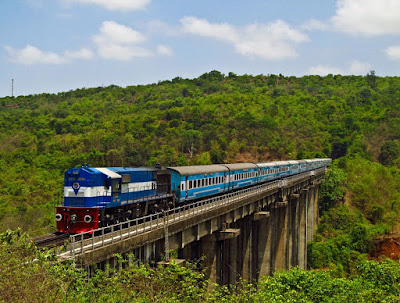 Twenty five years later, I am not sure if George Fernandes’s prophecy about Kokanaacha Manoos has come true, but the Konkan railway was now a reality.

In the monsoons of 2018,  I travelled the Malabar and Konkan region, extensively through the Konkan railway network.

Sitting by the ‘Aapatkaalin khidki’ – the emergency window on the Karwar express aboard the Konkan railway in an almost empty train on a weekday morning and watching the stations pass by is an immensely enjoyable experience.  The Train passes through tunnels that have been pored out of the manganese rich countryside along the Konkan and Malabar coast. Darkness engulfs the entire compartment and  kids and adults alike let out that shrill shrieky noise that amplifies and echoes through the tunnel. The noise immediately drops once the train emerges out of the tunnel.
Trains pass through tunnels the world over. But on the Konkan railway network it is different. The richness of the mountains and its landscape skirts past you at an unimaginably close distance especially in the monsoons. In the monsoon season it could as well be a life and death experience what with landslides and tree falls. But the experience is well worth it.  An entire waterfall could be at your arm’s length from your train’s window and you cannot but be in awe of the engineering marvel that must have gone in building this railway network drilling through these treacherous and steep mountains and making it safe for people to travel.

The West Coast Railway – the name Konkan Railway was coined later – was expected to be 840 Kms long and would cost about 1600 crores. The yearly railway budget for new lines used to be 250 to 300 crores and there were 25 railway lines already under construction. If West Coast Railway line is also added to this list Railway could set apart only about Rs.20 to 25 crores each year for this new line. With this share of allocation, the west coast railway would take 20/25 years for completion. Therefore, a new strategy for raising funds for the project and for its implementation was inevitable.
Then a new idea struck me. Why should the Indian Railway take up this project at all? Why can’t this project be executed by a Special Purpose Vehicle [SPV] in which all the four States along its route viz Maharashtra, Goa, Karnataka and Kerala could be equity partners on a BOT (Build, Operate & Transfer basis? In that case the four Governments need to contribute 1,/3 of the project cost and remaining 2/3 can be borrowed from the market. The SPV would then handle this project instead of Indian Railways.
I had an opportunity to place this proposal in front of Sri George Fernandez over breakfast on 02.01.1990 at Raj Bhawan, Lucknow where we had gone for inaugurating the construction of Chithoni Bagha bridge. Being a shrewd administrator rather than a politician, he jumped to grab this proposal wholeheartedly. Within 2 days of our return to Delhi, he was able to get the clearance from the Finance Minister Sri Madhu Dandavate, vice chairman Planning commission Sri Ramakrisha Hegde – both hailing from the Konkan region and finally the nod from the Prime Minister Sri V. P. Singh.
Sri George Fernandez thereafter directed me to contact the 4 State Governments, get their consent for equity participation in the project and get an agreement executed between the Indian Railways and the 4 State Governments. Even though Konkan Railway does not touch Kerala State, Government of Kerala magnanimously came forward to participate in the project. The proposal was then taken to the union Cabinet and the project was included in the Railways works programme for the year 1990-91, Thereafter a company was floated under the name Konkan Railway Corporation Ltd which had the responsibility to carryout final location survey, prepare estimate, raise funds from the market and execute the project. Following my retirement from Railways on 30.06.1990, Sri George Fernandez appointed me as the first chairman-cum-Managing Director of Konkan Railway Corporation Ltd. The rest is history.
During his tenure as Railway Minister, he gave full support to this huge railway project. Even after he moved out of Railway Ministry as Defence Minister, and Later out of government of India, the same guidance and support was forthcoming. Konkan Railway, though passing through one of the most difficult terrains ever encountered in the history of Railway construction in India got completed in a record short period of 7 years.
Hailing from the Konkan region, Konkan Railway was a dream for Sri George Fernandez. The very decisive steps he took as Railway Minister and financing strategy employed made his dream come true. This country would not have got this most useful railway line, which reduced travel time by 12 hours and travel distance by 650 Kms, but for his vision and passion.
The country is indebted to this genius for all time to come and Konkan Railway will remain as an everlasting achievement of Sri George Fernandes.
ttp://www.georgefernandes.org/the-institution-builder/

File photo of former Prime Minister AB Vajpayee inaugurating the Konkan Railway at Ratnagiri, in 1998, with George Fernandes (extreme left), then Defence Minister, and the Chief Ministers of Maharashtra, Goa, Karnataka and Kerala in attendance

- January 31, 2019
Email ThisBlogThis!Share to TwitterShare to FacebookShare to Pinterest