Strawberries and Cream at Wimbledon


Sometime in July this year, my google notification popped up and asked me to click on the link showcasing the photos of this day, ten years ago.
Intrigued… I click on the link and traverse down the memory lane.

It all began the previous day over an innocent remark about some article on that day’s tabloid about the happenings at Wimbledon.   With exams drawing to a close we had a little breather and were thinking of chilling out.

Feeni, my classmate from Pakistan suggested we give it a go. As students on shoe string we thought the tickets would be expensive . Wimbledon in my mind was also associated with a place where the high and mighty of the corporate worlds and the socialite’s hob-nob while they watch the Tennis matches as well.

One of our friends educated us. While it was a place where the who’s who possessed season tickets year on year to watch the best of matches at the center court, everyday, there were tickets available for as low as ten pounds, for tennis lovers which let you enter and watch any match at the  Wimbledon championships except the center court. However, we were warned the queue would be long and the wait much longer.  Moreover, there was no guarantee that we would get the tickets to enter the championships leave alone the center court.
Even if we did,  we would get to see some inconsequential match at the Wimbledon and tick it off our bucket list. 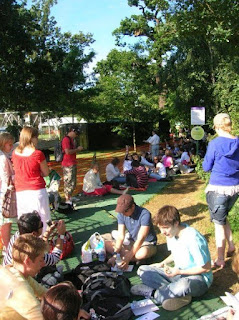 Thus, began our conquest to the Wimbledon on that warm and bright day at 6.00 am in the morning.  By about 7.30 am we were at the Wimbledon entrance and were astonished at the queue.  There were students like us and tennis lovers from all over the world who would not be able to afford a proper Wimbledon season ticket, but were committed nevertheless to watch the sport.
It was English summer and the sun had risen early.  There was a slight nip in the air when we joined the serpentine queue to try our luck with the subsidized tickets.
We were not too disappointed. Our ticket queue numbers were 242 AND 243. Going by the sleeping bags and mats, we guessed the ones much ahead of us were the ones who had come really early in the morning or had camped overnight.

For me and Feeni, my classmate from Pakistan it was a part of our blind list.  We just wanted to be there and experience it all. We did not follow Tennis and were not a great fan of the sport.
Setting out to a place you have never been to before, to have no expectation and to just go with the flow is the best part of the ‘blind list’.  It can never be a list, but just an agenda to be open and go with the flow.  That is what we were determined to do that day.

Killing and indefinite amount of time waiting for our turn was not difficult at all.

Me and Feeni got talking.  We were not thick friends, just acquaintances as we attended a few classes together.  She was from Pakistan, but bore a striking resemblance to a Malayali colleague of mine from my previous job in India and every time I saw her I would wonder if they were twins.

When we got talking she said her ancestors were from India and while she did does not remember the place where they were from, they spoke a language that could be spelled just the same from left to right. That confirmed to me the ethnic connections.  Feeni spoke Urdu and English.

Not a word of Malayalam.

It may sound cliched, but only as we got talking, I realized there were so many culturally common things between people of the two countries or for that matter all of the world. World over people are driven by the same things. A sense of identity, the need to be loved and to love.

Where we differed as we steered our discussion was when we got talking about politics, history and particularly the Partition of 1947. Feeni had her perspective on the partition while I had mine. This is what our respective history books and television programs had taught us.

That opened me up to a very different perspective that I had not imagined earlier.  No matter how open we think we are, we are all so limited by our view of the world around us!!!

By about 10.30am the gates to Wimbledon opened for the day. We were given to understand that depending upon the number of ticket holders and pass holders that were visiting, the queue for the subsidized tickets would be cleared.  In short, we were dependent on how many socialites and the corporate big wigs decide to visit Wimbledon and watch some tennis that day.  Luckily it was a week day, and early in the Wimbledon season. We were hopeful.

I finished reading ‘A thousand splendid suns' by Khalid Hosseini which was in the best-selling list of that year while we lay on a sleeping mat taking in the warmth of English summer. It was a hard-hitting book and its melancholy lingered on much after I had finished the last page.
Not a great mind set to have for an exciting day ahead, I thought to myself, desperately hoping that the queue ahead of us would clear up and we would get to go inside.

A few hours on, my wishes would come true. It is about mid afternoon and we get to enter the Lawn tennis championships entrance gate.

It was a riot thereafter.

At the 'today's match fixtures' board we note the qualifying matches for the day. Federer, Nadal were part of the day's fixtures. Martina Navratilova and Leander Paes, two of my favorites were going to play a mixed doubles.  But the icing on the cake was a Ladies doubles quarter final match between N Dechy / C Dellacqua and S Williams /  V Williams at the center court later in the evening.

It was one hell of a garden party. The lawns, the gardens and the wooden benches had people sprawled over them with their picnics. The tennis matches seemed like a poor excuse. The point was to enjoy the sun, strawberry, cream and champagne. 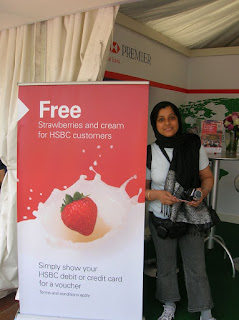 History has it that Wimbledon’s connection with Strawberries and cream began during the reign of King Henry VIII. Thomas Wolsey, a powerful figure in the king’s court, served the dish at a banquet in 1509.  Later, Wolsey built a grand palace that is known today as the Hampton Court Palace. It was here that Strawberries and cream were served to the spectators who came to the Royal Tennis court. By the time the first Wimbledon tournament began in 1877, strawberries and cream were trendy and in season given it was summer. It was considered a delicacy and given its limited shelf life, it became a favorite among the wealthy spectators who patronized the sport. 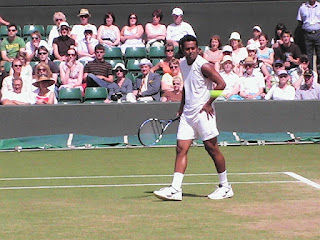 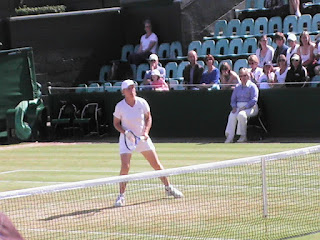 I was thrilled to watch Leander Paes and Martina Navratilova pair up for a mixed doubles match at one of the outer courts.  Later in the evening, we managed to get a free entry pass into the center court. (if the center court is not full, some entry passes are given to subsidized ticket holders to enter the center court for a limited period of time to watch the match in progress.)
I could not believe my good fortune as Serena and Venus Williams made their entry for a doubles match against Nathalie Dechy and Casey Dellacqua for the ladies’ doubles quarter finals.   Up and close to Venus and Serena Williams at the Wimbledon center court made it feel truly surreal.
The day ended on a really high note as the Williams sisters effortlessly won the quarter finals match. 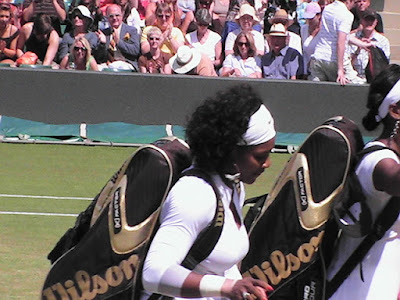 That is what happens when you open yourself to possibilities that you think did not exist.

Who would have thought as a student on a shoe string budget, I would get to watch Venus and Serena Williams at Wimbledon center court if I had not listened around and made it to the Wimbledon on a whim.
Excited, contended and tired by the end of the day, I stepped out of Wimbledon but not before picking up another free bowl of Strawberry and cream at the HSBC counter before stepping out and heading to the Southfields tube station.

This post is my submission for Lufthansa's exciting  new campaign

https://youtu.be/3g6dDFy3d8o
- October 15, 2018
Email ThisBlogThis!Share to TwitterShare to FacebookShare to Pinterest