Before I eventually quit my day job, I would spend many months day dreaming and drawing up a wish list of where I wanted to travel and what I wanted to hoard up as part of my travel gear.

Stuck in peak hour traffic on the Outer ring road I would drool over the huge billboards from Decathlon and Wildcraft with backpacks and travel gears sported by chic models with unbelievably flat bellies. 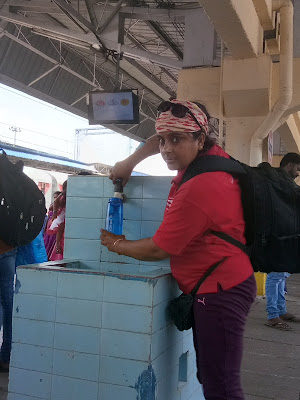 ‘Mera number … kub aayega…’ I would say to myself and sigh, as the private bus behind me would honk and wake me from my day dreaming slumber .

But like they say… be careful what you wish for, because wishes can come true.

And here I was, just a few days to go before my stint in that cubicle jungle would come to an end.  I knew there were no more of those fat paychecks coming into my bank account for a long time now. The income and expenditure had to be tightly balanced.

Whatever indulgences with money had to be made, it had to be made right then. My wish list of Amazon and flipkart had plenty of items from a trendy backpack to herbal mosquito repellants. But the most alluring among them was ‘Life straw’ water purifier.

The portable water purifier that travelers carried with them came from different brands.  Some Indian and some imported.  I had set LifeStraw up on my wish list and had done considerable research on other brands and the product reviews by other travelers about life straw.

Then, on a whim I purchased it.

Partly because I did not want to spend money buying bottled mineral water and wanted to travel to places where bottled water would not be available. But mainly, I was conscious of the menace that the use and throw plastic has been creating everywhere in the world.

My city being the worse of them all. We do not know if what we throw does get recycled or gets dumped in some farmers fertile field in the garbage dumps outside the city. Reuse and recycle is all fine. Fundamentally we need  to reduce the production of plastic as much as we can.

It was the peak of monsoon seasons when I started travelling. I travelled across the western Ghats along the Konkan and Malabar coast in the monsoon of 2018. 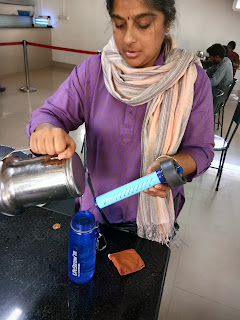 From the water streams formed in the rains up the Kodachadri mountains in Kollur, to road side restaurants on the way to  Udupi, Kochi, Nashik, Pune and many other small towns, my lifestraw water purifier has been filled in with water from every conceivable source, including the drinking water outlets of railways stations of  Pune Junction, Ernakulam junction or Mavellikara.

If there was one place where I did not test my Lifestraw water purifier, it was in Aranmula in Kerala . This was a place we went to for flood relief work a week after the devastating flood had submerged that quaint temple town into water.

Ironically the wells which were the main water source in this small town were declared unfit for use as there was bleach sprinkled everywhere to avoid outbreak of diseases from the dead livestock that may have decomposed in the floods.

There was a high chance this could cause many water borne diseases.  Aid agencies and the government had supplied abundant supplies of of bottled mineral water for the residents and the volunteers alike, until such time the place was restored to normalcy.  Sadly, all those empty water bottles may find their way back into the Pampa river.

On a personal level, I had to make sure I did not drink bottled water even if that was a situation that could be treated as an exception.  I lived on that one bottle of water from LifeStraw for an entire day just to prove the point.

Despite all the travelling, I have not fallen sick in the last three months. … touchwood’ (For those who have known me before this time, you know how often I fell ill and how long it took me to recuperate every time I was down with a cold or a flu).

Please watch this YouTube video of mine that sums up my experience.

LifeStraw water purifier works. I can vouch for that.

Although it comes in various other sizes and colour , mine is a one-liter bottle capable of filling about 650ml of water since the in-built straw takes up the rest of the space.

Lifestraw has a water purifying filter that kills all the protozoa, bacteria and other particles that could come into contact with the filter. The filter is inserted into the bottle like a straw. It can filter upto  a thousand litres of water before you need to change the purifier.

LifeStraw and various other brands are available on Amazon.in

P.S :    Just in case you are wondering, LifeStraw water purifier manufacturers are not paying me anything to write this post. (Although I would not  mind if they did 😊 ) .
It was just a curious comment from Vinod Majumdar on facebook that triggered this post. Thanks Vinod. 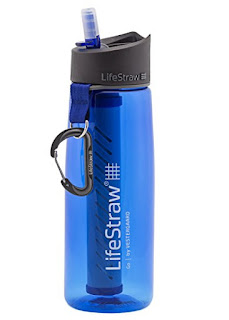 - October 12, 2018
Email ThisBlogThis!Share to TwitterShare to FacebookShare to Pinterest