Walk across the Brooklyn bridge


Brooklyn Heights - This Newyork’s Posh neighbourhood has been the watering hole for over a century for budding and successful writers from all over the world. 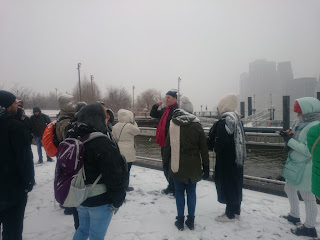 Two of my  favorites – Amitav Ghosh and Jhumpa Lahiri have made Brooklyn their home and that was enough of a reason for me to take a walk across the neighbourhood.

A guided walking tour that starts at 2pm from Brooklyn Borough Hall on a cold January afternoon is’nt exactly  a great time in this time of the year to venture out on a walk.

That Saturday afternoon at the stroke of two, as if by cue snow flakes started descending as our tour guide and local historian John started off with telling us about this island that set the standards for many a social change in the United States of America.

Abolition of slavery being one of them.

Oh well … he started off with something like this.  He said, ‘this is my last walking tour of Brooklyn Bridge under the Presidency of Barack Obama, pchhh… such a classy President we have had’ and he chuckled. That explained a lot. 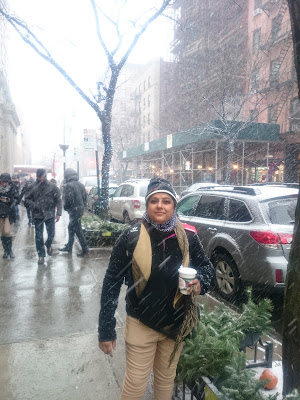 The walk across some of Brooklyn’s historical neighbourhoods was peppered with the revelations of American celebrities who brought property in Brooklyn heights for astronomical amounts.  Not surprising from our tour guide who claims to have worked in the real estate business before he became a walking tour guide.

Among many other things we learnt that day was that the first Haagen Dazs outlet to ever open was in Brooklyn. And you thought that a posh ice cream brand like that has to have a European origin !!!

The snow had intensified and there was atleast an inch of snow all over the streets.  We stepped into a small café called chocolate factory, that made brisk business as we walkers helped ourselves with the rest rooms and some hot chocolate to keep us going in the cold weather. 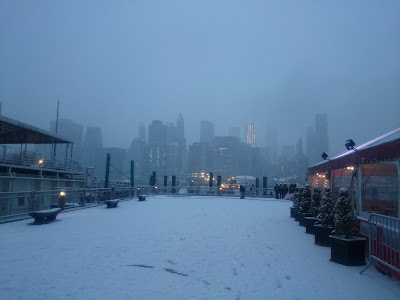 The bad weather played spoil sport in what would otherwise have been a breathtaking view of the Manhattan skyline stretching from the Statue of liberty up until the tall glass skyscrapers across the river that formed the famed Manhattan skyline.

The walk ended at the Quaint Brooklyn Icecream factory right underneath the Brooklyn Bridge where we stepped in to take refuge from the snow as well as for some warmth and hot coffee.  ( certainly no ice cream in that weather. )

As I sipped my chai ( yes that is the American brand name of tea bags spiced with cinnamom and cardamom) I watched through the window  the view of the Breathtaking Brooklyn bridge from underneath while heavy vehicular traffic moved over it and across the city.

I promised to be back the next day to walk across the Brooklyn bridge, weather conditions obliging.

On Sunday afternoon the weather was more than obliging.  It was sunny clear sky by New York standards and the temperature on the mobile phone indicated a 2 degree Celsius, which was cold by a non New Yorker’s standards.

Much to my surprise Tourists thronged the Brooklyn bridge. Getting down from the nearest subway station, a leisurely walk across the bridge can be a good 45 minutes with plenty of photographic moments capturing the Manhanttan sky line and the bridges across the Hudson river. 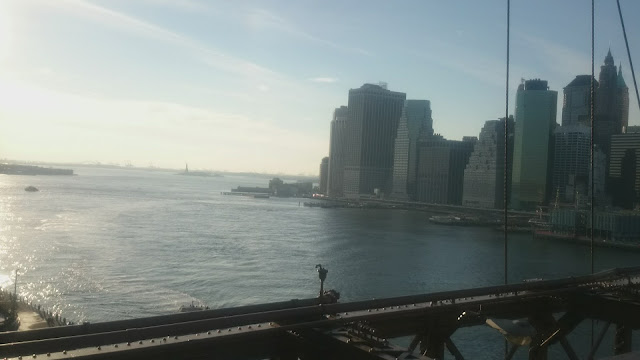 And that is when you miss a good DSLR camera. 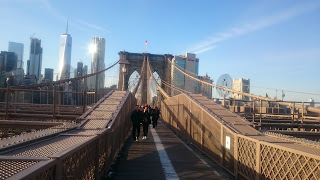 As you walk across Brooklyn Bridge watching the breathtaking view of New York skyline you cannot help but feel the energy and determination of those millions of migrants from all over the world, for well over two centuries who beckoned Lady liberty and arrived at her shores and built this magnificient city from where the world’s wealth passes through.
Here is a poem written by Walk Whitman written before the Brooklyn Bridge was completed. He clearly felt the area’s energy on  ferry in 1856, years before the bridge was built.  ‘Crossing Brooklyn Ferry’ sings directly to us, its future readers, and is an enthralling document of Whitman’s physical and metaphysical crossing of the Bridge. Through its themes of spiritual ascents, moral doubts, and sublime conections , it foreshadows everything that this landmark would come to represent. 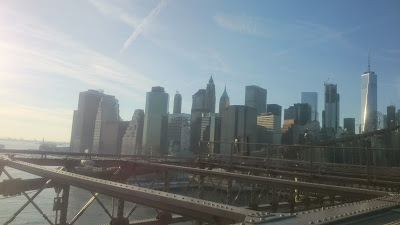 Flood-tide below me! I see you face to face!
Clouds of the west—sun there half an hour high—I see you also face to face.
Crowds of men and women attired in the usual costumes, how curious you are to me!
On the ferry-boats the hundreds and hundreds that cross, returning home, are more curious to me than you suppose, 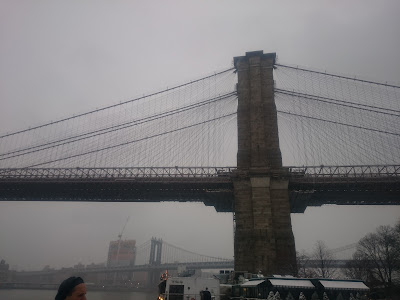 And you that shall cross from shore to shore years hence are more to me, and more in my meditations, than you might suppose. 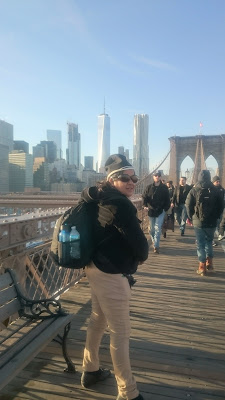 - February 12, 2017
Email ThisBlogThis!Share to TwitterShare to FacebookShare to Pinterest