It has been a long hiatus from blogging.  Actually this could the after effect or burn out from the April A to Z challenge or its hangover. Neverthless, I clicked some pictures this morning on that every so sturdy Nokia 520 and that inspired me to write. 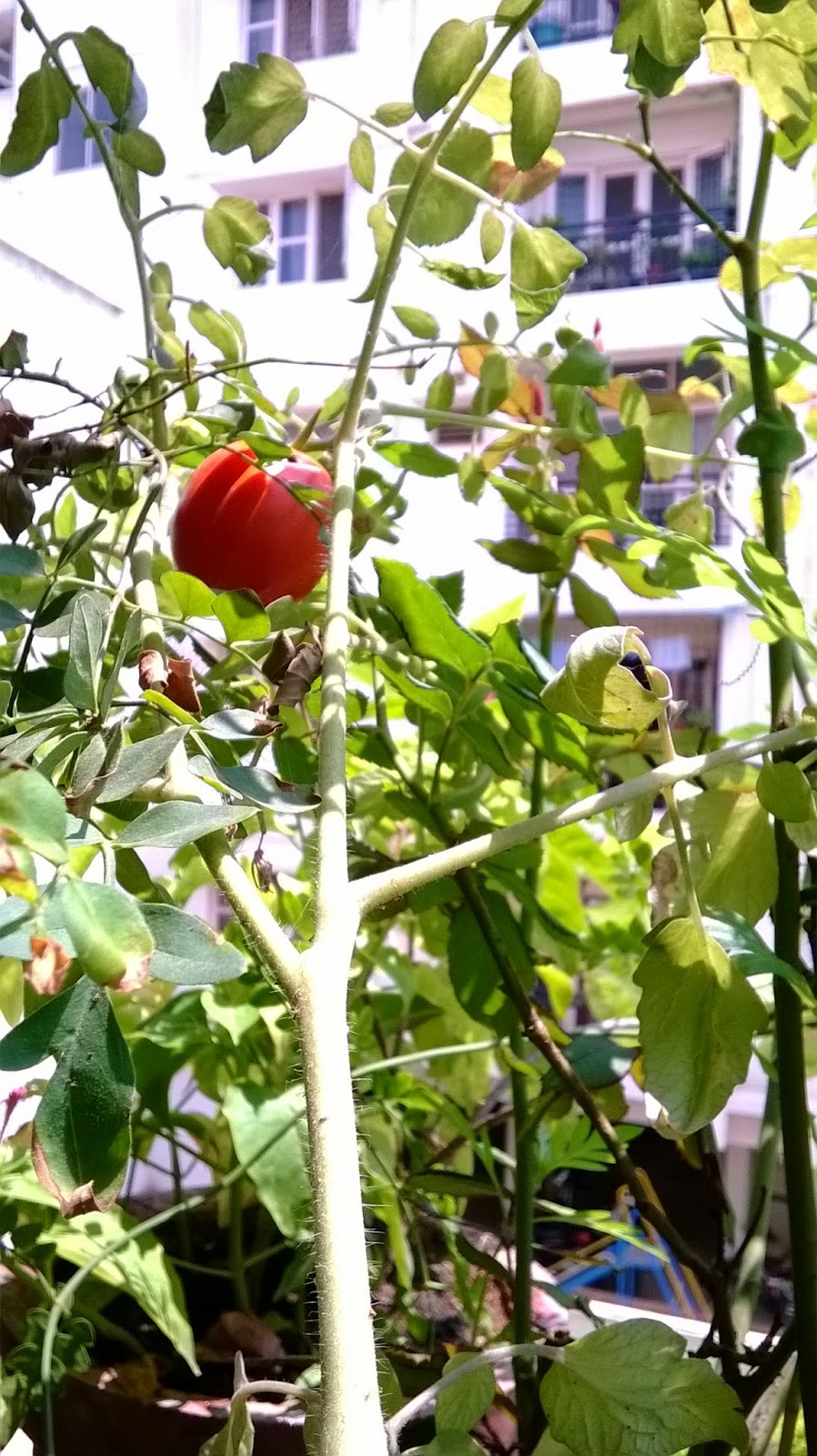 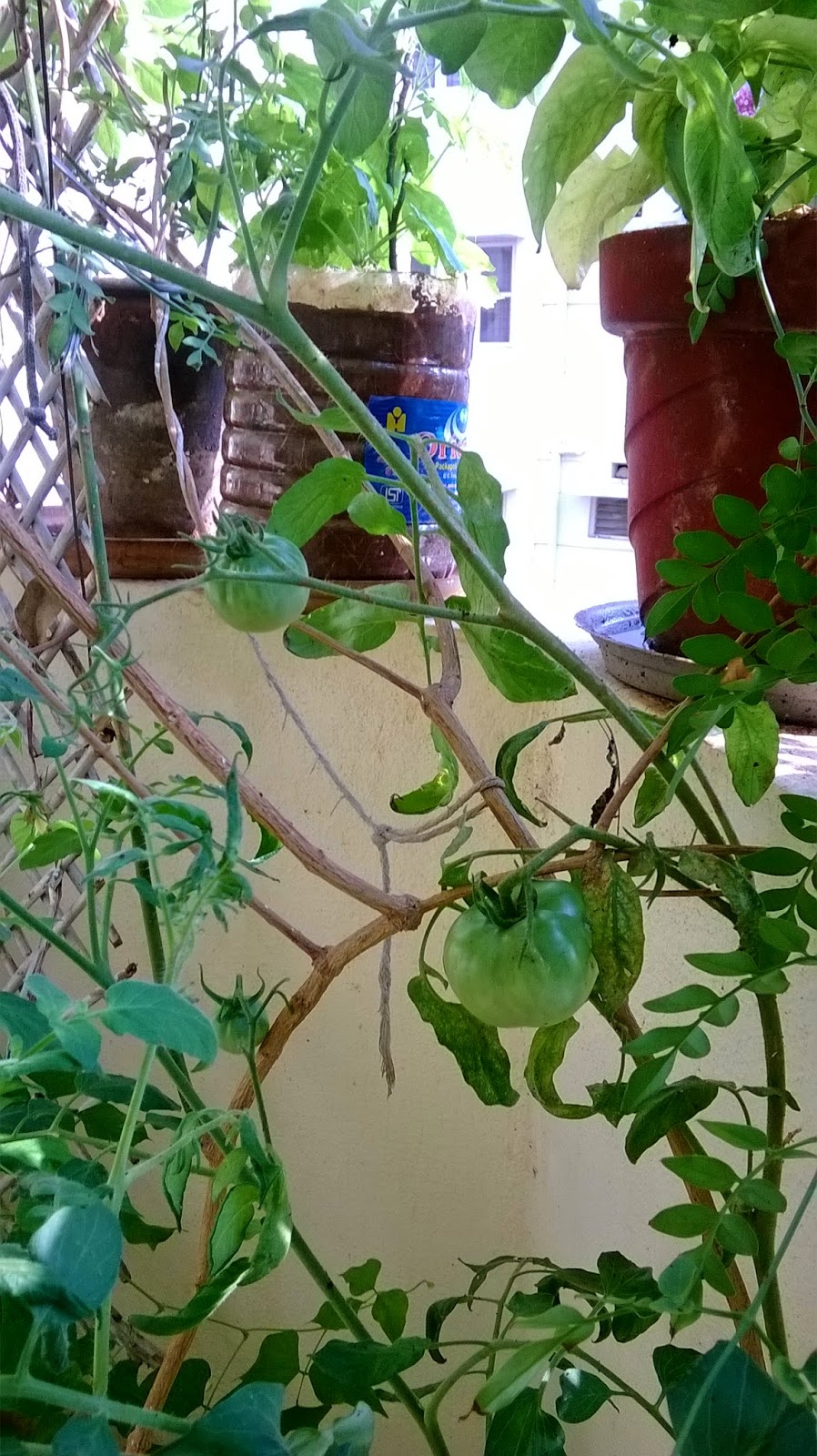 There is news from the Creepy wild forest (CWF)

We harvested our first ripe tomato of this season this morning.  There  are a few that are yet to ripen.  Looking forward to a good harvest provided the monsoon pests in the form of  white aphids do not attack the tomato plants very vigorously.

The bitter-gourd creepers are growing up fast and furious.

The betel leaf creeper that came from Kumbakonam  is spreading itself all over the place.
Our Mint Chutney is now getting famous. We make it every time there are guests at home, just to show off the glorious products from our CWF.

For a change the 'table roses' are blooming in the hanging pots. We were never lucky with table roses.
But this time around they seem to have taken a liking to our CWF. We plucked them from outside the entrance of an 'Isha Nursery' where there were growing in the wild.

On a road trip from Nagapattinam in Tamil nadu, I was intrigued by the number or small nurseries called 'Isha Nursery' all over the state highway. Isha Foundation's Project Greenhands has taken upon itself to increase the green cover in Tamilnadu and distributes saplings of wild trees at a very nominal price through these nurseries for anyone who cares to buy and tend to a few trees. They sell saplings of wild and endangered varieties  of trees like the sandal wood, Rosewood, Mahogany, Teak and timber. They also sell the ones with medicinal values like the 'Malavemdu' ( the Mountain neem tree), Manjal Kadambai ( Botanical name Harldinia cordifollia) and Karumarudu ( Terminalia tomentosa) varieties.

These are volunteers from Project greenhands who have spread themselves across Tamilnadu and have made these saplings accessible to the rural as well as urban populace in Tamilnadu. Each sapling costs anywhere between Rs. 5 to Rs.10 which is cheaper than a cup of tea from the cheapest of roadside eateries.

As a memory from that trip we picked up 'Malaivembu' and 'Shenbagam' saplings to plant in our apartment entrance. That would be our little bit to make up for eroding the green cover of this urban jungle we live in which not so long ago was a forest known for its wilderness particularly the elephant population.

With some little care, the 'Malaivembu' and 'Shenbagam' have taken well and are growing just outside our apartment complex. I hope they survive all odds, thrive and grow up into sturdy trees 10-20 years from now.
10-20 years from now - really that seems like a very long time to wait. For instant gratification we therefore turn to Creepy wild forest (CWF) where lifespans of most species does not last more than 6-12 months.

Every December we have visitors from abroad who cannot take chances with the water quality in this country.  When they visit, they end up buying two to three crates of Aqua-fina mineral water bottles.  This year after they were gone, it broke our heart to dump these empty plastic bottles in the garbage pile.  (We do not have adequate Recycling outlets in our country).

In order to neutralise our carbon footprint, we decided that these Aqua- fina plastic bottles got converted into flower pots.  After a few tender saplings of Balsam and Marigold seeds germinated in a bigger mud pot they were transplanted transplanted one each into these containers.   The balsam bushes that grew tall and sturdy in these two litre aqua-fina containers are now approaching  old age. They came home as seeds along with the yellow marigold from that memorable trip with Sowmya and Nancy to Belur in November 2013. In six months they germinated, flowered and withered away. But not before propogating plenty of Marigold and Balsam saplings all over the creepy wild forest.

As we await the second generation of Balsam and Marigold plants to flower, there were some valuable lessons we learnt.

For all the money we spend, the branded variety of seeds that we used to buy from the stores normally last only one generation. They never  propogpate. As I understand they are treated with poison and sterilised and sold, just so that the business model for the corporations selling the seeds of these ornamental flowers and vegetables does not go bust.
On the other hand when a seed in sown from the wild, such as left over seeds of tomatoes from kitchen waste or that podalangai (snake-gourd) left overs that we accidentally threw into the mud pot, their chances of  germination, survival and growth into a plant and a creeper are entirely left to chance with the nature. There is no guarantee as to what will germinate, survive and propogate and what will not. It is survival of the fittest and the luckiest given the circumstances and resources present around the place at that time.   And yet what manages to ultimately grow, gives so much of abundance in return. 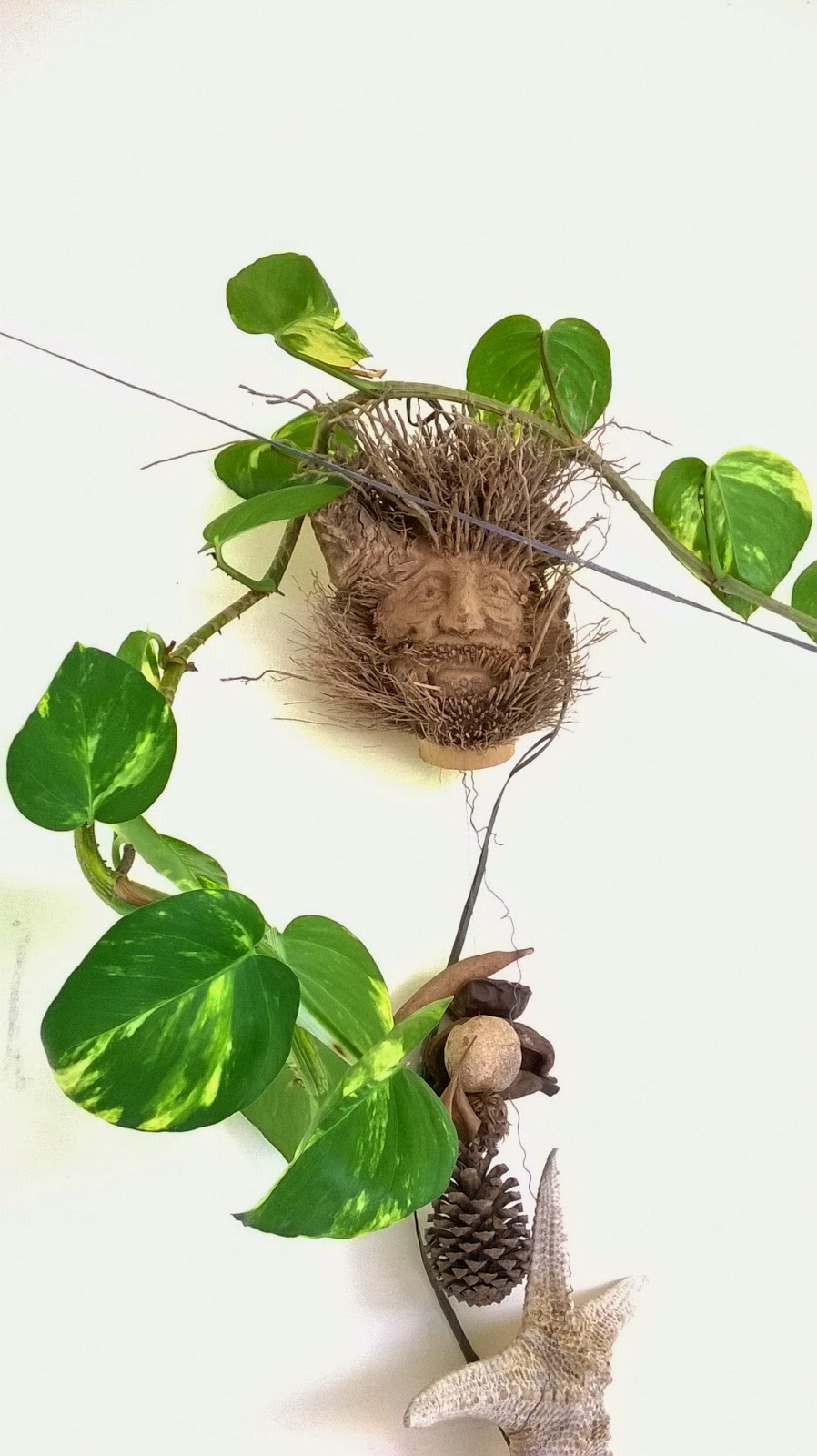 Sadly I may have to lay to rest our ‘Garden Babaji’. He came to our Creepy wild forest from an exhibition that was selling hand made products from the north-east a couple of years ago. He was a work of art by some unknown tribal somewhere  in the dense forests of the north east.
He was an inspiration and a mascot for the creepy wild forest.
But as in the  law of the wild, everything must go. 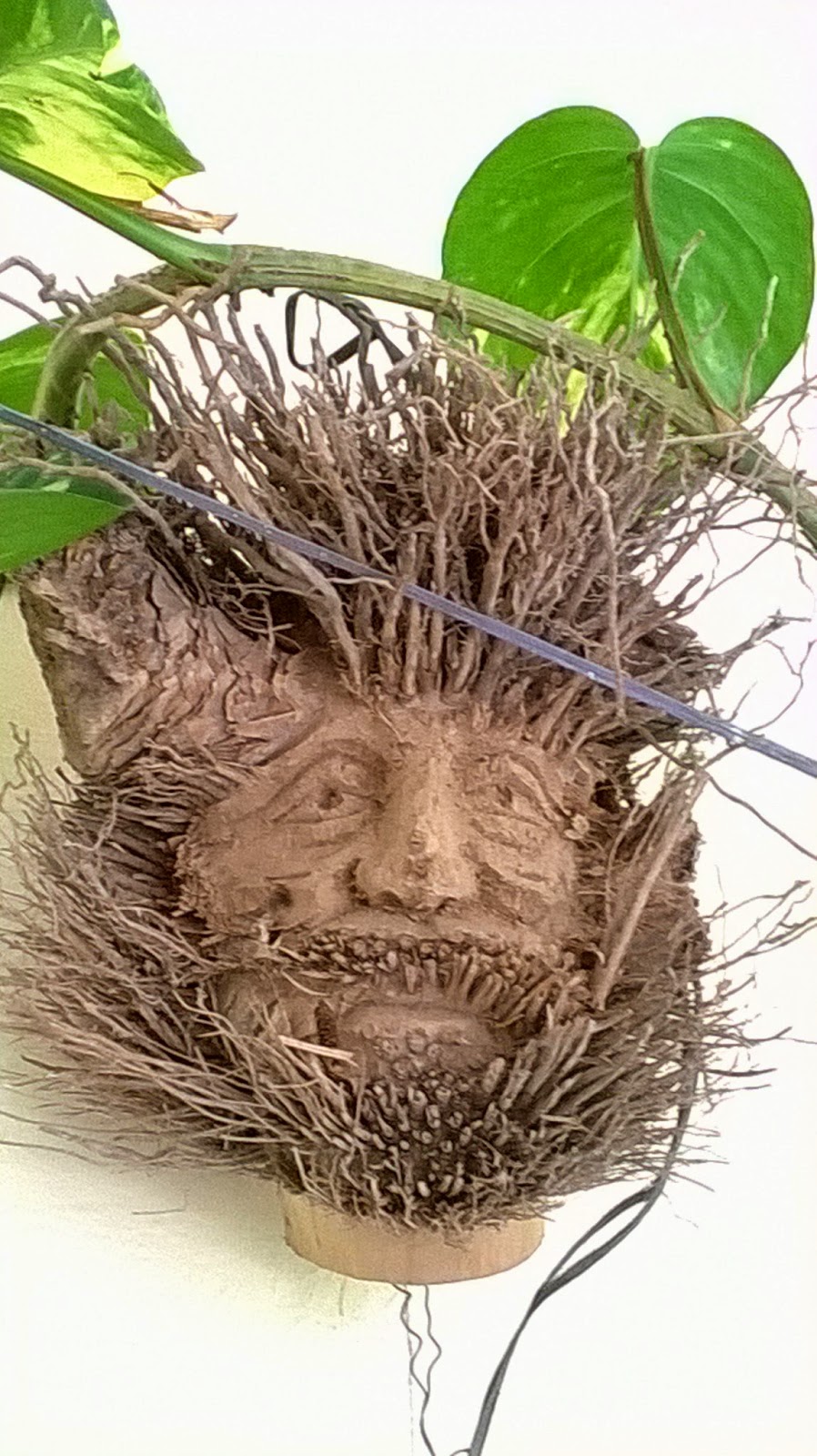 His fault has been that he attracts honey bees who have found  an ideal spot around him to set up their home.  Unfortunately the civilization of humans that inhabit this place  around  him find the colonisation of the honey bees very threatening.  This morning we had to evict the honey bees and pack him up in a plastic bag. He would be thrown away into the garbage pile from where he would travel to some landfill and rot there along with tons and tons of plastic covered garbage.

It saddens my heart indeed.  Just as I write this, I think, I might find another place to hide him and rescue him. As far as our Creepy wild forest is concerned it is good bye to ‘Garden babaji’.

Garden Babaji - you were the inspiration behind the creepy wild forest.
You will be sorely missed. 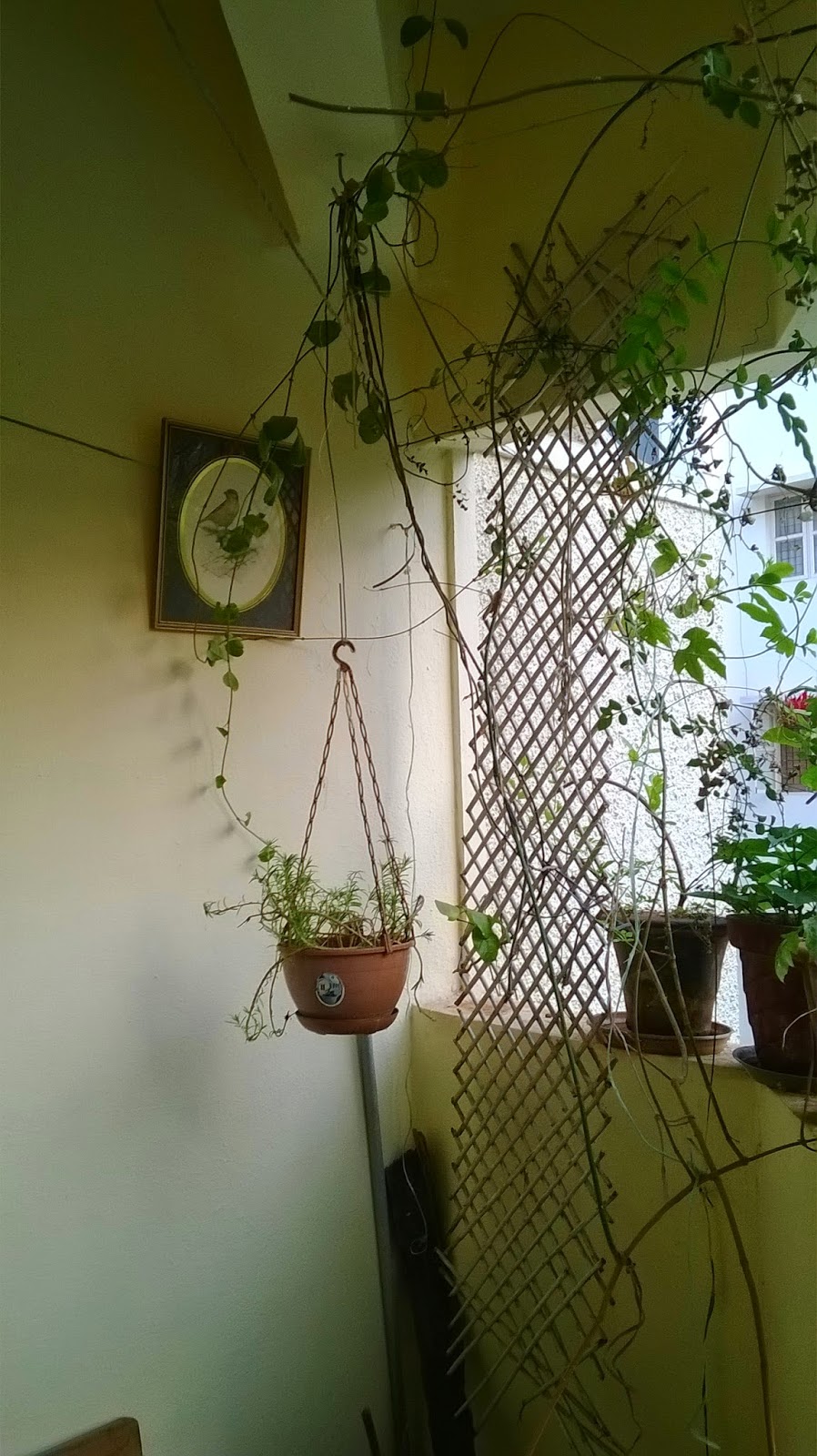 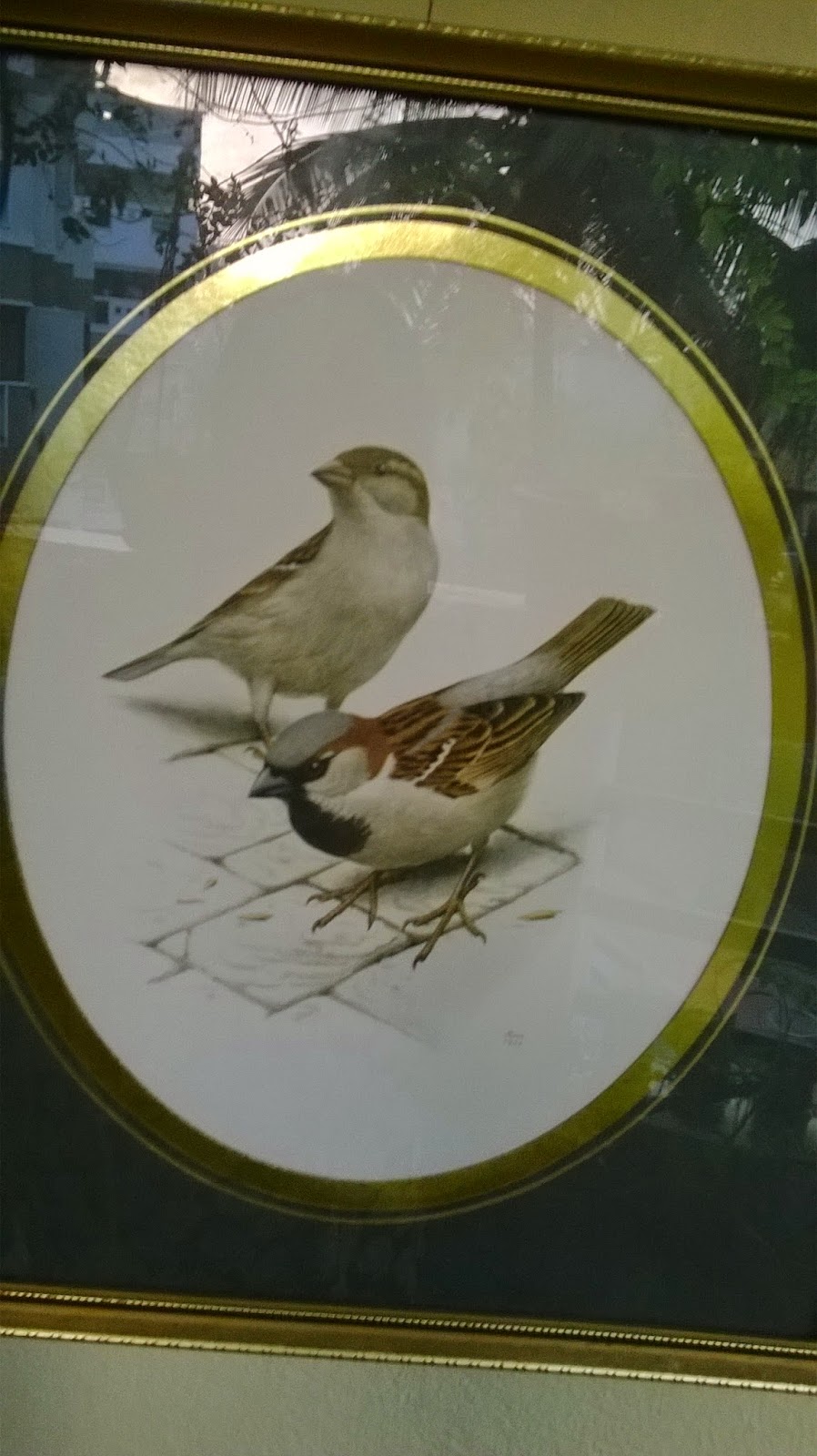 - June 08, 2014
Email ThisBlogThis!Share to TwitterShare to FacebookShare to Pinterest