It was probably the most momentous day in the life of this 26 year old girl from Delhi.
She appears before 100,000 onlookers and millions more viewing her on the national television channels,
With oiled and tightly plaited hair,
A black plastic hair clip and pink rubber band for a hair style.
Wearing a pink cotton salwar kameez and a pullover.
You cant help but gasp and mutter … what a fashion disaster !!!
Could she have not done better ?

Certainly in Delhi where your womanhood is sized up more by the designer brand of clothes your wear and the brand of cosmetics you use across most sections of society than in most other places, Rakhi Birla stood out and made a style statement. 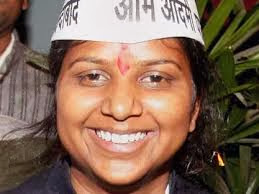 The woman exudes a confidence that makes you take note of her and Google, ‘Rakhi Birla’ for more details.  It attracts attention especially because the surname is synonymous to the major business house and used as a common term to indicate someone from a wealthy family.

It turns out to be such a anti climax when you learn that Rakhi Birla is actually Rakhi Bidhlan. The attention grabbing surname is a result of the an administrative and typing  error that got engraved in her class X mark sheet.
(Courtesy :http://en.wikipedia.org/wiki/Rakhi_Birla)

Born as the youngest in a family of four daughters, her parents decided to abort the child  when she was conceived as they already had three daughters. It was a result of a failed abortion, 27 years later, that Rakhi stood in front of millions of people and took oath as the youngest minister in the AAP cabinet. Hailing from a Dalit lower middle class family, Rakhi did her post graduation in Mass communication before joining a Private TV channel as news reporter. (Source :http://articles.economictimes.indiatimes.com/2013-12-26/news/45593073_1_delhi-university-arvind-kejriwal-aap)

At 26, inexperienced Rakhi in the youngest minister in Kejriwal’s cabinet.
Her unupdated linkedin profile reads thus :

Anna Hazare’s fight against corruption and later followed by the Nirbhaya Rape case,  the two reports that she covered as a young  journalist seem to have changed the course of her career. She quit hournalism and joined the Aam Admi movement with Arvind Kejriwal.

While it is too early to tell, here is a woman who listened to her heart early on in life.

Irrespective of whether her party survives the current government or not, Rakhi has already made history.
Here is wishing her all the very best.  May the trappings of power, fame and money, the burden, expectations,  pulls and pushes of womanhood not deter her from her chosen path.
May be she is too young and hence probably too naïve to steer through the crude and cunning world of politics. It is not about being a woman in a man’s world.  The Amma’s and Didi’s of Indian politics have gone far beyond and proven that the world of politics is not too alien for a woman with grit.

But this time it is this woman's ideals that will be put to test.
To survive, she needs to have her heart and head at the right place,
And that is what will make her stand out from the rest.
Rakhi, the country wishes you all the very best .

India needs more of you.
Not just in politics but in all other fields.
With or without makeup.
Preferably without.
Either ways … you simply rock.

- December 28, 2013
Email ThisBlogThis!Share to TwitterShare to FacebookShare to Pinterest