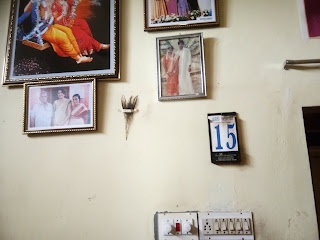 The date sheet calendar at Anila teacher's house on the street next to Aaranmula Pathasarathy temple shows 15th august 2018. That was the day the River Pampa breached the banks and the floods drowned the possessions of the rich and the poor alike.

A couple of hours before the overflowing dam's shutters were opened up, the army picked people up on rescue boats and transported them to the first floor of the municipal school and to other safe locations. Soon the water levels would breach the first floor of the school building as well the police and everyone would flee to the terrace waiting for choppers to rescue them. 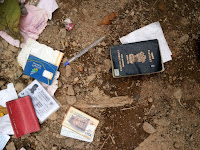 Their houses were submerged. Apparently from atop the helicopters, even the massive Aramula temple was submerged    Their houses, humble as well as the not so humble were nowhere to be seen.

In it were passports,progress reports, marksheets, title deeds , school homework, wedding albums. Winter clothes. mattresses and many other things that had to be left behind.

Memories of millions of things from an era before the floods of August 2018.
Soon enough the first floor of the school as well as the police station would submerge as the shutters of the dam up the Pampa river were opened up.The downpour would not cease for atleast the next twenty four to forty eight hours  hours. said the weatherman.

The police station transferred its files to the terrace under a sheet hoping more rains would not lash and trash them apart.  Alifa, District civil police officer who happens to be stationed at Aranmula says they were holed up and on duty for four full days without rest or sleep. 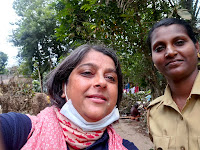 It must be difficult being a woman police officer, i ask, clearly showing her that i am in awe of her choice in profession.
There are about 3000 women police in Kerala, she replies in a matter of factly manner.

Considering how massive the devastation has been there are no flood reported deaths from this district  says Shiju her colleague with some pride.

Full credit to them. The army the police and everyone who worked towards it. I let them know that their thankless job is being appreciated. 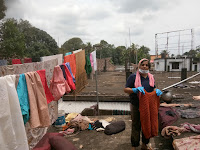 There is a constant demand as well as supply for volunteers and it is all regulated seamlessly. You report to the local police station and they identify the houses that need overhauling  call out for the occupants and escort the volunteers there.

About twenty of us from Sivananda ashram near Trivandrum and the young men from the local football club from around the area ( here in after referred to as Kallikad FC aka KLK FC) teamed up. They wore bright yellow colored  t-shirts possibly sponsored by the owner of Kallikad FC ( KLK FC) . It read r 'Kurian trading agency'.  We started our four hour drive at five thirty in the morning.

Biju thomas our local contact at Aranmula lives amidst his rubber plantation about 12 miles away from the flood hit area of Aranmula.  He arranged our introductions with the police and in no time we got going. He along with his teenage son Noel accompanied us throughout.
Here is how we operated. 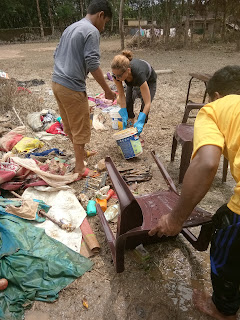 About 10 to 12 of us volunteers entered the house like a flash mob. We ask the occupant, mostly the woman of the house what over hauling was needed. We received our instructions and we  got going. Mostly silt had to be washed away and the doors to be opened. Mattreses dripping with stale water had to be put out in the sun to dry out or to be thrown out,  the kitchen essentials had to be cleaned and sorted out.
Text books and title deeds had to be spotted and handed over for hyper care.
Wedding albums and warm clothes needed the warmth of the sunny outdoors.

Most importantly the silt that had covered just about everything from the kitchen utensils to the antique furniture had to be de-silted. At some houses you waded through silt up until your ankles.  The task was a dirty one in its literal sense. The smell of dead livestock permeated beneath our face masks and the effect of bleaching powder that was generously sprinkled across the streets and inside the houses irritated our wet heels. It left cracks in your heels almost instantly. 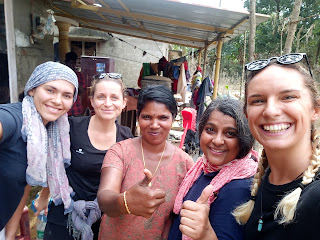 As I rescue Obin Jayakumar's second standard school textbooks and notebooks and put them out to dry in whatever conditions they could survive, Little Obin was nowhere to be seen.
It is going to be a long holiday and he has a valid excuse for why he could not finish his homework.

I notice the woman of the house, possibly Obin's mother feeling overwhelmed with all the overhauling and cleaning that was getting done at her house at such a quick pace. Here, at her command for possibly the next one hour she had a dozen volunteers from places as far away and as varied as Uruguay, France, Russia, Kallikaadu , Bangalore  and Zimbabwe team up and clean up her unbelievably untidy home. She clearly did not expect this and  profusely thanked us all.

We took a selfie with her and took leave and marched on to the next house as per the instructions from Alifa our police woman incharge for the day.

After a couple of houses done, we are tired.
As if by cue a bunch of volunteers appear out of nowhere and offer us sweet buns (dil khush)  Another volunteer goes around with a huge stalk of ripe elakki banana and offers it to all volunteers.

Our stomachs are full and we are now rearing to go.

This time around it is a rather well stocked house that we are let into. On some other day in some other blog post  I would have described to you that quaint old house by the river side in its entire glory.
But it was not such a pretty site to behold on this day.

Water soaked cotton mattresses are huge. heavy, dirty and stink like hell. To carry them one after the other to dry them out on the first floor terrace required the strength of a superman.

Besides there were rooms to be cleaned, water to be drawn from the well and furniture to be lifted out . It was heavy duty  work. But very gratifying.

As expected the Kallikada FC team sporting their yellow t-shirts with 'Kurian trading agency' truly rocked. Their team effort to accomplish the work at hand was amazing.  And truth be told no one was watching them. Certainly not Mr. Kurian. In case you are wondering who Mr. Kurian  is, blame it on your rather poor General knowledge. Mr. Kurian's relatinship to the Kallikad FC is similar to
Abhishek Bachchan's to Pink Panther and  Malcolm Glazer's to Manchester United. Some day you will thank me for this piece of Trivia.
Anyway ... I digress.  But let me make the point.  From what I have seen Kallikad sports club rocks.

Noel the teenage son of Biju Thomas. our local host was feeling proud and was working really hard mopping up all the muck on the floor. He told me later that it was his teachers house that we were cleaning. It must be a strange sight seeing your teacher in her house clothes. Even stranger must be to see her flustered what with all the havoc created by the floods. This sure was going to be the topic of discussion with his friends when school reopens. 'Flood is a great leveler', Noel would reminisce to his school friends.

Soon three nuns from their school came visiting. Anila teacher told them about how a rescue boat rescued her ailing father out to safety on that fateful night of fifteenth August.
That is when I notice that the date sheet was still stuck at fifteenth august.
It would remain stuck for a long time to come.

Three generations of memories. Memorabilia washed away by the floods, she reminisces pointing at the soft toys rotting in the show case.

After about four to five homes overhauled, an overwhelming sense of tiredness engulfs us.
We know there are thousands of such homes that need a lot of help.

Our volunteering for a day is but a small drop in the ocean.

But I have seen today that the ocean of humanity is a really vast one. As we head back we see another bunch of volunteers walking with another police man.  Their T-shirt says they are from the 'art of living foundation.

There will be many more to come we hope. .

Tired and exhausted we walk towards the temple where our vehicle is parked.
It is Onam eve. Any other year, this day would be a day of feast at the temple.  But this year the temple looks forlorn and defeated by the fury of the floods.
On the way a kiosk sponsored by 'kerala catering association' offers  rice payasam to all passers by. 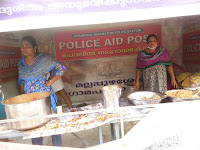 I pick up a glass and drown it down. It tastes delicious.
They are offering free food as well. But we turn it down.  We need to wash up. Our hand gloves and face mask are smeared with silt and muck and there is no telling what disease could be lurking around.

And then. as if by cue volunteers from the local primary health care center are distributing tablets.  One before food to avoid gastroentitis and these two are for after food, to prevent  brain fever, they say and hand you down the pills. Don't forget, they add.
They repeat this to every volunteer and visitor and the locals who pass by.

Here is my message from the ground at Aranmula to the rest of the world.:

People from all over the world who have donated in cash and kind,  be assured your contributions are being well spent and well administered. Atleast from the little bit that I have seen here at Aranmula. .

Of course not everything is perfect. There was a shortage of facemasks for the local residents and there is a perpetual shortage of  field volunteers. But barring a few hitches here and there it is a brave front indeed.

Kerala will recover from this and march on....

As we drive back towards Kallikad, I am filled with gratitude that this karma yoga ( Selfless service) opportunity was presented to me that too, to work at Aranmula.

The feeling is inexplicable and the sense of gratification is overwhelming.