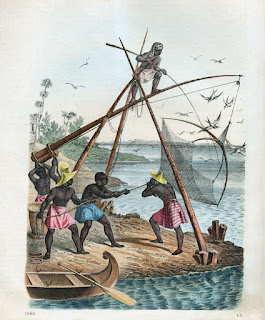 ‘Cheena Vala’ as they are called in the native Malayalam are found across the harbor towns in China.

Kochi once a trading port owes the import of Chinese fishing nets as a legacy of traders from the AD 1400 court of Kublai Khan, these enormous, spiderlike contraptions require at least four people to operate their counterweights at high tide.

While such nets are used throughout coastal southern China and Indochina, in India they are found in Kochi , where they have become a tourist attraction.

The Indian common name arises because they are unusual in India and different from usual fishing nets in India. With the advent of modern fishing techniques the Chinese fishing nets are not exactly profitable, but have been preserved as a tourist  attraction. 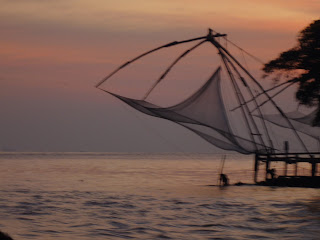 They are fixed land installations, which are used for a very unusual and now outdated method of fishing. Operated from the shore, these nets are set up on bamboo and teak poles and held horizontally by huge mechanisms, which lower them into the sea. They look somewhat like hammocks and are counter-weighed by large stones tied to ropes.

The net is left into the water for a short time; say for four-five minutes, before it is raised back by tugging the ropes. The catch is usually modest, but it is not meant  for  a big trade. At the corner of the Chinese finishing nets are small street hawkers who could take  the fresh catch and cook up a lip smacking fired fish fritters that would get sold  in a Jiffy.

The Chinese fishing nets are also most photographed  attraction  while aboard  a local ferry especially around sunset.
Here is another one when the sky was overcast and the tides were high on the backwaters of the port of Kochi. 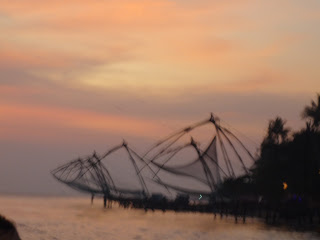 The cool breezy humid air atop the ferry was refreshing to feel as the chinese fishing nets dwindled into oblivion while the local government operated ferry touched the island of Vypin. 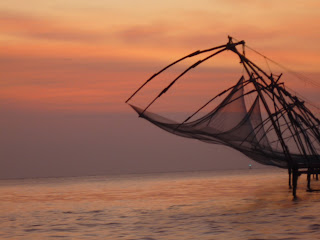 - April 13, 2017
Email ThisBlogThis!Share to TwitterShare to FacebookShare to Pinterest