I always wanted to...


In Madras movies are not synonymous with entertainment.   It is like religion and is an inevitable part of your life.  In our case, it is a part of our family folklore.  ( Clickhere to read my previous post FDFS )
First day first show (FDFS) of Rajinikanth movies are what legends are made of.  Giant cut-outs of the Thalaivar are bathed in milk before the FDFS. Fireworks galore the movie theatres and the police department works overtime to ensure the smooth release of Thalaivar's latest films.

I always wanted to experience the fanatic frenzy that goes with the FDFS,

I pleaded with a die-hard Rajini fan who happens to be a good friend, to take me for an FDFS.  Every time a Rajini movie released, he has avoided me and my request.  Here is a guy who spends a good part of his salary to buy an FDFS movie ticket at Albert talkies in Chennai every time a Rajini movie gets released.  He has apparently never missed one since he was a young boy.

When I asked him why I couldn’t go with him to Albert Talkies for an FDFS he scoffed at my request as though I was asking to Trek Mount Everest with Tensing and Hilary.

He explained that you had to have a certain hard earned pedigree to get a ticket to watch the FDFS at Albert or Kasi Theatre. In the frenzy that surrounds the release of a 'Thalaivar' movie, a non-believer would get blatantly exposed. He did not want to risk that ordeal with a non-believer like me on the tow.

Well this time around I was well prepared.  I pulled a few strings and my tickets were confirmed .

I took a train to Chennai because it was in Chennai that I would be able to experience FDFS in all its authenticity. I was not the only one. I am told the national highway connecting Bangalore and Chennai was choc a bloc on Thursday evening.

It was a 4 am show, but the festivities started much earlier. 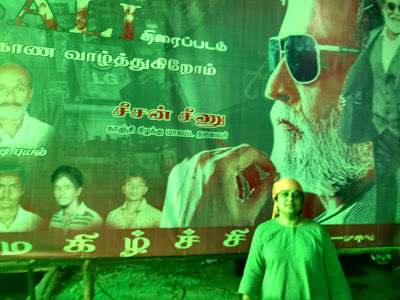 UBER joined the show of solidarity. With an SMS code  'Thalaiva' you could get a 100 off your ride between 3 am and 5 am on Friday. If you ride cost less than a 100 rupees it was all free.
That was possibly the cheapest drive ever to a movie theatre.

Anand, my cousin had booked our  tickets. He was watching the FDFS with a bunch of his friends and I joined in..

As we arrived, it was evident that the Chennai Police were on an overdrive. They could not take any chances. Traffic was regulated, security was beefed up and they a big responsibilty to pull of such momentous occasions without any untoward incidents jarring the day.

The press was also there. They were interviewing some die-hard fans sporting the Kabali T-Shirt. 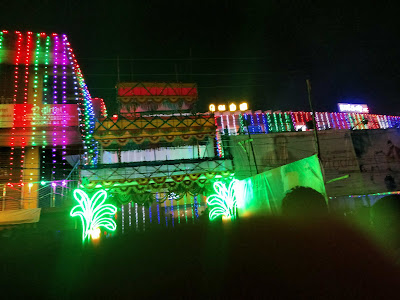 Vettri theatre in Chrompet was lit with colorful serial lights, there was non-stop fire crackers bursting at the theatre. The only other time you could see people wide awake at 3 am would be the day of Deebavali, as in Taminadu it is believed that when Krishna killed Narakasur and the news reached the people they got up well before the crack of dawn  to bathe and burst fire crackers as a mark of celebrations of the triumph of the good over evil . 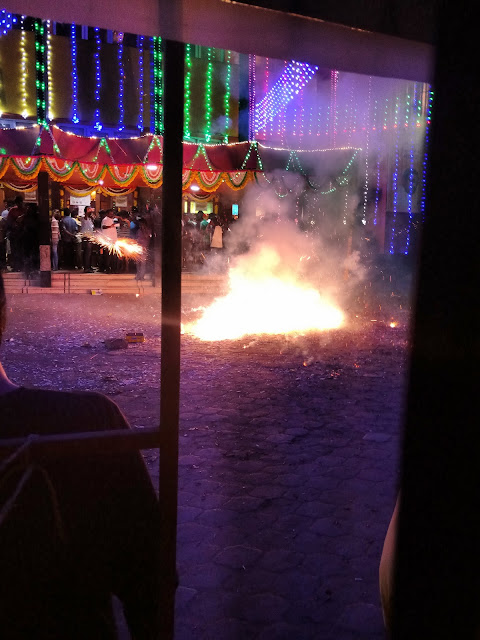 I did not take me much time to realize there were very few women that morning for the FDFS.

But there were a few. About 4 or 5 to my count including a three year old who was perched atop her father's shoulders.
I guess ... the indoctrination  and membership into Rajini fan club membership begins early in life and gets passed on from one generation to another.

Talking about safety, there certainly was a small spark of subconscious fear lurking inside me. This was a predominantly  male crowd, at what would  be called 'un-holy' hours on any other day and that too in a public place.

The Chennai that I had known and left as a teenager lurked with Eveteasers. Public places including buses and road sides lurked with men gaping at women, teasing, commenting and passing lewd remarks. So I was entitled to a very conscious bias.
I was now much older and bolder, and could afford to take this calculated risk considering I had male company for the morning. That is what I told myself despite the 'is-it-safe-out-there' fear lurking somewhere in my subconscious mind.

I really did not have to worry. I realized very soon that a generation has passed.  The crowd was safe, well behaved and consisted of fans who knew to mind their business. Atleast today they knew what their sole purpose was.

The bouncer at the theatre entrance frisked the men (women were exempted since we were so few of us and moreover there was no woman police on duty)  checked them for any traces of alcohol by asking them to blow on his face before letting them in.

Once inside the movie hall is when the otherwise reasonably well-behaved crowd got wild.
Loud cries hailing "Thalaiva" would be followed by frenzied whistles from all over. The wait for the screen to lift was unnerving for the die-hard Rajini fans.  At one point in time the crowd looked up in unison to threaten the guy behind the projector if he did not begin on time.  It was only 3.56 am. But the wait felt like eternity.

The digital world was also experiencing the same frenzy. Tweets flew from Albert and Kasi theatre as well. They were all to begin the show at 4.00 am. The balcony at the Vettri theatre had some celebrities come to watch the FDFS.  For those sitting at the seats down below somewhere near the screen it was cause for a lot of excitement.

Silambarasan, Shivakarthikeyan and Siddharth posed for the photograph outside the entrance and tweeted. It went viral. For the uninitiated ( including me)   Silambarasan, Shivakarthikeyan and Siddharth  are, emerging Kollywood actors from the millenial generation. Like for millions of others in the movie world aspiring for a career in Kollywood,  for them as well, Rajinikanth is demi-god.

And then there was this man who shot into  celebrity status a couple of days before. Although he was interviewed by the media, he did not let out much.  Praveen, the technician who edited the movie claimed to have seen the movie a hundred times before the FDFS.  But that did not stop him from coming for the FDFS. He had a balcony seat at the Vettri theatre.

Soundarya, Rajinikanth's younger daughter was at Albert Theatre, the original Mecca for the FDFS. She was also trending on  tweeter.

The Demi God himself was somehwere in California, completely unaffected by all the Hero worship that was going on, not just back home, but all over the world. Somewhere in bay area, a die-hard Rajini fan driving down the road, spots him on his morning walk takes a quick video on his mobile and tweets. By evening it goes Viral.

It is 4.03 am. The projector man is already receiving life threatening hoots from the crowd below.  And then the screen lifts.

Initially the shrillness is deafening and then you do not get to hear anything.
I guess they call it ultra-sonic decibel frequency.
Soon normalcy returns.
The screen was ablaze with the 'smoking is injurious to health' ad-campaign.  The crowd gets restless and the ad with all its gory depictions of the side effects of Tobacco is clearly getting on everybody nerves.

Once again the ultra-sonic decibel frequency takes force. This time Hooting and whistling are followed by an impromptu dance over the theatre chairs.

And why not. The censor board certificate for 'Kabali' is now on display.

And then on there is not turning around.  The movie begins.
' Thalaivar' makes his entry.
This is the most momentous scene that defines a 'Rajini' movie. A few fans fall on the ground and prostrate. Some have tears rolling down their eyes.  Almost everyone is standing. A couple of them, get  up on their chairs, pull out their T-shirts and toss it as high as they can.

Shiny tinsel paper, money and god knows what else flies up all over the place.

And thus it all began. The frenzy would subside a little. Soon when 'Thalaivar' would be back into the frame the noise would hit the roof.  When 'Thalaivar' delivers his dialogues,  as if on cue, hooting and whistling would continue.

Now that the FDFS is past us, well ... as far as the movie goes, there are mixed reviews.
But those who write reviews do not come to watch FDFS.
And those that come for FDFS see no sense in reading reviews of Rajinikanth movies.

Reviews are written by the critics for the athiests and agnostics.
Among the believers there is no such thing...   .
,
Like they say the Madrasi's fanaticism for movies and the fanatic frenzy around FDFS cannot be described, it can only be experienced.
I rest my case here.

Capturing it over a video or audio does not do justice, but neverthless I have attempted it here.


‘This post is a part of Write Over the Weekend, an initiative for Indian Bloggers by BlogAdda.’ 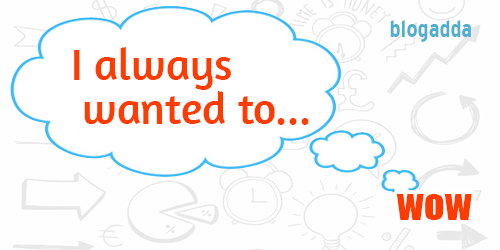 - July 24, 2016
Email ThisBlogThis!Share to TwitterShare to FacebookShare to Pinterest