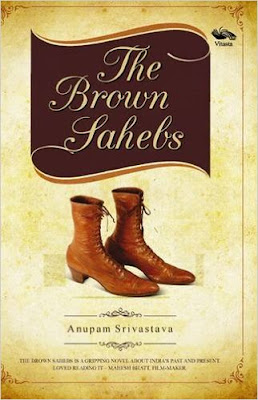 The brown Sahebs, much as it is a work on fiction, follows a close account of not –so fictitious characters that we know from the Indian independence era. Gandhi is possibly the only one who appears as Gandhi while the rest have their names and characters ever so slightly changed.

It is an account of the how the British colonial legacy was deliberately preserved when the reins of power changed from the British – the white Sahebs to the Indians – the Brown Sahebs on 15th August 1947.

The origin of the ostentatious show of power exhibited by the British was copied by the elite Oxbridge educated Indian politicians in stark contrast the the very ideals of simplicity and austerity that formed the fundamentals of the freedom struggle under Gandhi.

The story revolves around the power brokers in Lutyen's Delhi. When the British left, India's elite helped themselves to the ministerial berths and the perquisites that accompany them. Right from the British built bungalows of Lutyen’s Delhi to the now infamous lal batti culture even after almost 60 plus ears of Indian Independence has been featured in minute detail.

As much as Anupam Srivastava attempts  to portray a near realistic account of the dealings among the political power brokers  of Delhi  that assembled soon after the Indian  independence and the distancing of a dejected and frail Gandhi, from active politics after the Indian Independence. The very Gandhi whose mass appeal and power had been instrumental in gathering the momentum for the freedom struggle.

All this has been portrayed from the perspective of a fiery young  journalist  whose newspaper later ends up being the mouthpiece of the government  when its editor Shyam Dubey sells the soul of his newspaper in exchange of  a ministerial berth in the newly formed cabinet.

No prizes for guessing who Shyam Dubey , Vidya Babu and his daughter Komal in real life could have been.

The emergence and re-emergence of Aam Admi Party over the past few years espousing similar struggles and ideologies espoused by the protagonist of the novel Pratap influenced by Gandhi makes one draw similarities between Arvind Kejrwal ‘s ( earlier) incarnation of the fiery rebel influenced by Anna Hazare.

Mercifully though Kejriwal has not done spiderman like stunts walking the walls of red fort . His stunts seem far more realistic when he boarded the metro from Kaushambi. Afterall he was the one known for his dharnas at the Ram lila maidan at the slightest pretext.  The novel traces the roots of why Indian  politics is what it is today, as it shaped from the characters who influenced it from the pre Indian  independence era.

If there is one thing one could fault Anupam Srivastava, the Author is for his storytelling style.

Power corrupts. That is the simple moral of the story. The universality of the story could have easily appealed to the world audience.  Had the novel been slightly more ambitious and written keeping a broader section of audience, there would have been more detailing on various nuances that are so unique to India particularly to north India’s culture.  The author assumes that the reader would be well aware of the context. The story is written with the naïve assumption that the reader is an Indian, is familiar with the past and present power politics of Delhi, understands the nuances that form an essential fabric of the caste/ class politics of the north Indian hinterland and has followed through the independence movements of India.

Sometimes one wonders if the book has been hastily written keeping a very narrow section of audience in mind.

The story has all the ingredients needed for a novel.   Historical fiction, power struggle, young hero, love triangle, philandering power brokers and a flash forward to present day climax.

The transition from journalistic and academic reporting to being a story teller is possibly what the author could have worked on before taking the manuscript to the publishers.

Overall it is a very good attempt in storytelling. Its success lies in the fact that  it connects the dots of today's crass display of political power and its origins relating them to the incidents in history that have shaped the current power and political structure in India.

The review for the Brown Sahebs has been written and published as a customer review for Amazon.com

You can buy the book online here at  Amazon.com

http://www.amazon.in/The-Brown-Sahebs-Srivastava-Anupam/dp/9380828314
- December 13, 2015
Email ThisBlogThis!Share to TwitterShare to FacebookShare to Pinterest