These were tales spanning four generations spread across three continents in between and after the two world wars of people who set forth under different circumstances from one small village called Agaramangudi.
The story line traversed through different time lines, locations or incidents with no particular order. The only order being the alphabetical one – A to Z meant purposefully for the A to Z challenge.

This was my attempt at writing slices of what I one day hope to be a full fledged novel. Much as I love the magical art of the written word, I am a lazy, sloppy, pessimistic  procrastinator. The reason I signed up to the A to Z challenge was that it would keep the lazy sloppy pessimistic procrastinator in me on my toes.

I had prescheduled most of my posts by the 1st of April, but I knew the crucial part of the story was yet to be told. On the 18th of April I found myself feeling restless and anxious. 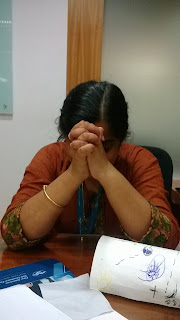 The A To Z challenge that had gone on so well so far was suddenly stuck at alphabet P,Q,R,S and T.  I had actually thought through and prepared and pre-scheduled my posts even for the most dreaded alphabets, X  Y and Z much earlier.

I think I almost decided I would give up.

That is when an old friend got in touch and said she was so touched by my writing. And that the characters, the location and the culture,  it all seemed so real.

Ah... show me a writer who does not like a little ego massage.

That was probably the spark that I was waiting for.  My creative juices started flowing and poured out in the form of my writing. I wrote for the next few posts, the alphabets P,Q,R,S and T  from my heart over that weekend and walked around with a contended smile plastered around my face for the next one week .

Many fellow bloggers constantly visited and read my blogs. I made some new virtual friends and followers. There were’nt too many who left comments and that left me slightly disappointed, I must confess.   When I would watch other bloggers being bombarded with 30 to 40 comments everyday I would feel neglected.

I would wonder where I was going wrong.
I guess the world figured out I was a social media loner, an introvert, or may be others think I am a snob and keep away from my blog.

Like the fox in the sour grapes story, I convinced myself to believe that  ‘no comments’  was better than all those very synthetic, artificial comments and likes, that the social media is so rife with these  days.

Neverthless there were some comments.  Many heartfelt ones too. Thank you all who commented. You really kept me going.

A special thanks to Stephen Tremp  from the A to Z challenge host to have kept me going when I was really on the verge of slipping up somewhere in the middle.  I must mention Birgit whose well researched posts on Hollywood actors of yesteryears opened up to me a vast arena of world cinema that is now put into my ‘must watch’ list.  Despite the wide cultural gap between us and our writings, she was one blogger that diligently visited and I faithfully reciprocated.  Thank you Birgit.
Birgit – I think you have inspired  yet another set of bloggers from pipinghotviews to participate in the next year’s challenge who will present a slice of Bollywood and Kollywood to the blogging world very close to your style.

I look forward to the challenge next year. The theme for next year is beginning to take shape in my head, but then 2016 is a long way ahead.

- May 07, 2015
Email ThisBlogThis!Share to TwitterShare to FacebookShare to Pinterest